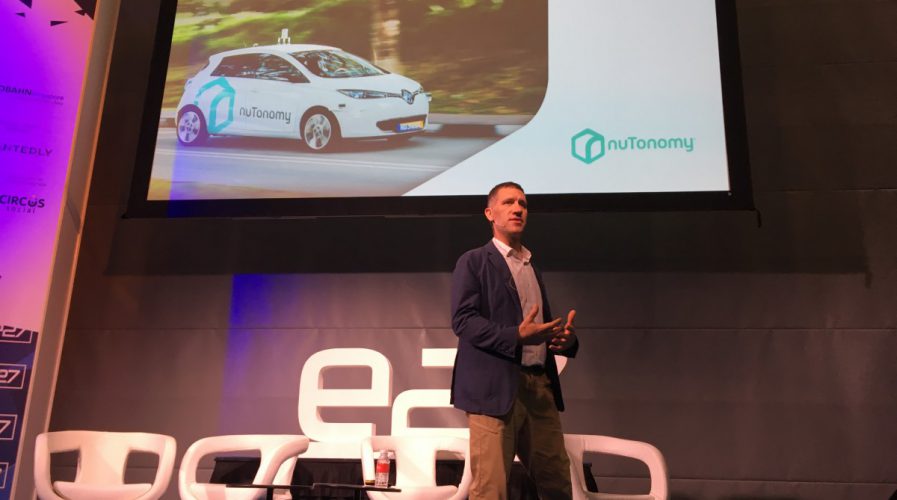 nuTonomy wants to be the next step in your transportation experience

AUTONOMOUS car software has been a hot topic of the last couple of years, with the biggest names in technology sinking millions, if not billions, of dollars worth of money into developing their own software for driverless vehicles.

Doug Parker, chief operating officer for nuTonomy, a developer of autonomous vehicles software, spoke at the Echelon Asia Summit 2017 in Singapore about the company’s work with various car-related companies in their journey to bring driverless cars to the public at large.

nuTonomy's software is learning to figure geography and driving around pic.twitter.com/pcJ7xBf4Em

For the last year or so, nuTonomy has made waves for the various partnerships it has established with companies such as Lyft, Jaguar and Singaporean-based Grab, which are focused on achieving its goal of end-to-end user experience. Perhaps more so than any other company in autonomous vehicles today, nuTonomy is bringing the dream of self-driving cars into startling technicolor.

“Many of us rode around in taxi cabs many years ago. Five years ago, everyone started riding around in Ubers. We want to be the next step up in terms of experience,” Parker said. He said nuTonomy was working on software – despite there already being players rethinking the concept of the car itself – because they wanted to bring autonomous mobility to reality sooner.

According to him, the vehicles nuTonomy is working on will be not only 90 percent safer than normal vehicles, but also provide smoother and more efficient modes of transportation.

“There’s really no reason to own a car,” said Parker, who has divested himself of his own personal vehicles. In Singapore, he relies largely on both public transportation and the availability of affordable ride-sharing services from Grab and Uber.

nuTonomy's software is learning to figure geography and driving around pic.twitter.com/pcJ7xBf4Em

Parker also sees a future where the cost of maintaining a car would be outweighed by the benefits of not having one. He suggested as soon as 2050, governments could begin restricting human-driven cars to race tracks and areas made specific for driving.

“We think at a certain point it’s so much safer to drive autonomously that it would be irresponsible to allow humans drive a car.”

For nuTonomy, according to Parker, the future of transportation is already largely here, though adoption globally will be slow due to varying cultures of driving. He noted the difference in driving cultures in Boston and Singapore was itself a huge challenge to the ability of nuTonomy to scale, but that eventually, we will all get there.

“Why are there so many companies chasing self-driving cars?” he asked. “There are very few markets you can say are trillion dollar markets, but the estimates we’ve seen for the market for mobility are US$1 to three trillion dollars within five to 10 years. This is the largest market in our lifetimes to go chase.”

The company is taking the opportunity provided by the huge demand in the market to “radically change how we ride round [the] city”. The rise of the ride-hailing service already began the work of eliminating the number of cars running around a metropolis, and it’s expected soon, autonomous vehicles will eliminate human drivers entirely.

It’s interesting to consider the lengths nuTonomy has achieved in the short four years since their founding back in 2013. The company is still largely a Series A startup, but it is already achieving name recognition through its partnerships despite the overall lack of experience in the industry.

The company is already trialing its product in Singapore’s business district where passengers can download their recently launched app to hail an autonomous vehicle. The company also announced a team-up with American Lyft to bring its services to the chilly shores of Boston.

However, the heart of the company’s future lies in bustling Singapore, where the company moved to in 2015. The country’s transportation regulator has been a fan of nuTonomy’s work, having announced a partnership with the company last August.

Parker said Singapore was chosen to be nuTonomy’s launch market for autonomous vehicles because its population was continuing to explode, and was expected to grow from five to seven million in the next five years.

“Singapore really needs autonomous cars,” he said, and later noting the number of available roads cannot grow anymore to handle more capacity. In fact, the Singaporean government has been working to introduce policies to wean its population off personally-owned cars as well as reduce other kinds of vehicles, such as trucks.

However, nuTonomy isn’t stopping just at individual cars – it has plans to build up a comprehensive ecosystem of autonomous vehicles that will allow passengers to easily transition from train to bus to car, and back. It is also developing a payment system for a seamless experience.

“Essentially, one transportation network for the whole country,” Parker said.