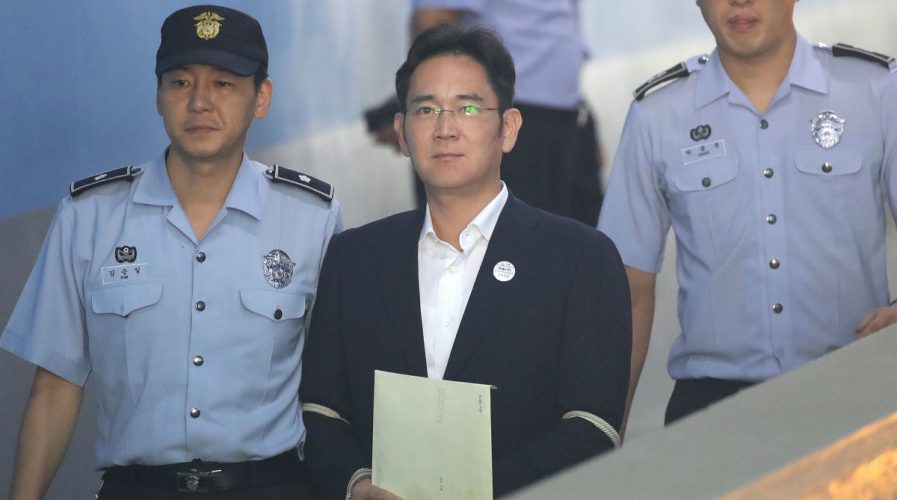 Lee, who is the scion to the massive Samsung empire, will serve a five-year sentence on charges of bribery and embezzlement. Source: Reuters

JAY Y. LEE, scion to the Samsung empire, has been found guilty of bribery, perjury and embezzlement by a South Korean court and has been sentenced to five years in prison.

After months of speculation and dramatic court room battles, Lee has become the first high-profile business figure to fall victim to the anti-corruption wave to sweep through the country since the ousting of controversial former president Park Geun-hye. South Korea has famously been known to dole out light penalties to the luminaries of industry, making Lee’s sentence that much more sensational.

Prosecutors drew testimonies from huge pools of witnesses and were working to link a 2015 merger between Samsung affiliates with Park’s actions, who was a close confidante of the Lee family.

According to Bloomberg, Lee could be seen to be holding back tears during the trial and continued to deny knowledge of the dealings of Samsung’s affiliates beyond the electronics division. Prosecutors reportedly were asking for 12 years of jail time.

Lee’s lawyers confirmed they would be seeking an appeal. 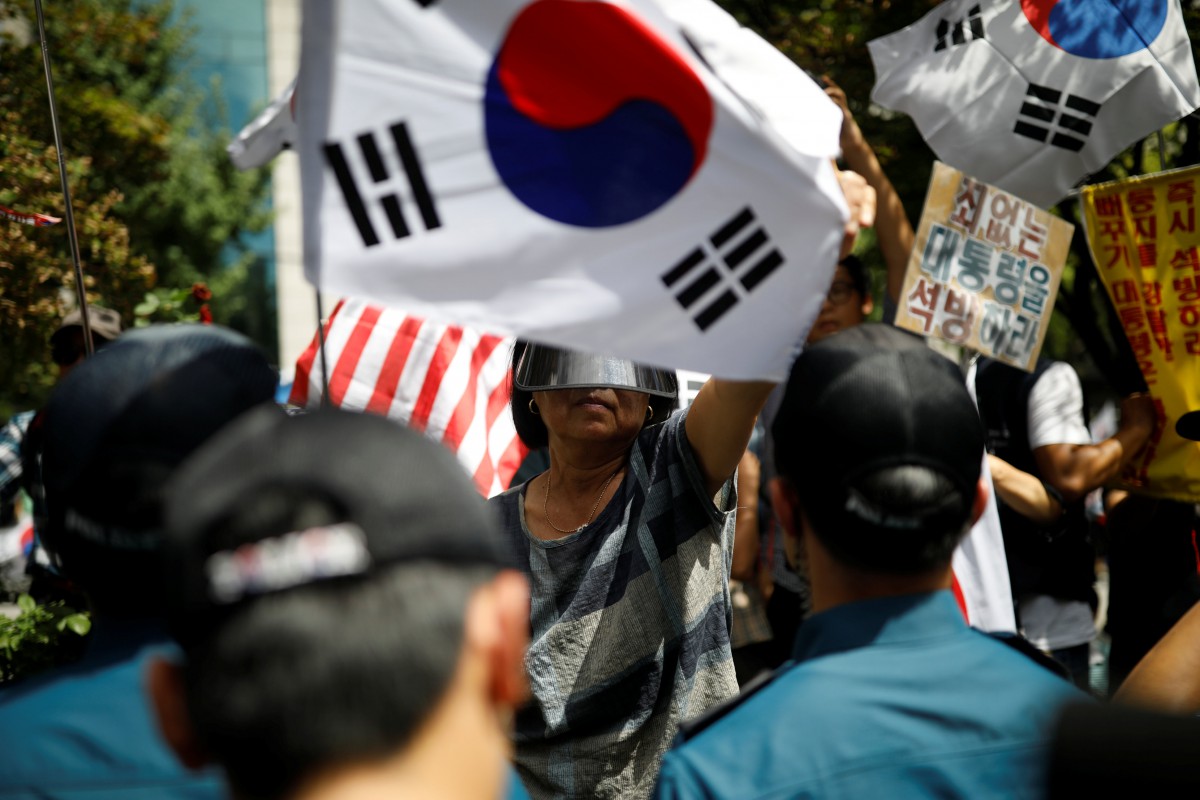 Protesters from a conservative group that supports Park attend a rally to demand Lee’s release outside a court in Seoul, South Korea. Source: Reuters

Lee, who was Samsung’s vice-chairman, had been in custody since February. The ruling by the judges will result in many questions about the ability of the technology conglomerate to move beyond the reaches of its founding family. Lee’s grandfather founded the company almost 80 years ago. It is now one of the world’s biggest smartphone and memory chip manufacturers.

This is the latest scandal in Samsung’s pockmarked history, which has since included exploding phones, a dangerously unstable computer chip market, and the encroaching reach of Apple’s handsets.

Lee will join the ranks of other business leaders who have been convicted on charges of corruption, including his father, Lee Kun-hee. Other former Samsung executives were also convicted on Friday – former chief strategy officer Choi Gee-sung and former president Chang Choong-ki were sentenced to four years each.

South Korea's TV in its finest hour of journalism is chasing a convoy carrying Samsung heir JY Lee from jail to his verdict trial pic.twitter.com/cJKp7MKfrS

Samsung is South Korea’s largest “chaebol”, or family-run conglomerate, and is part of a rarefied class of huge corporations that rule and drive South Korea’s economy. Chaebols have long been seen as a main source of internal corruption in South Korea due to their monopoly on a variety of industries, including life insurance and shipping.

Samsung’s scandal set the entire country’s imagination on fire as it pitched a struggle between the massive conglomerates perceived as inherently corrupt and the socialist party of President Moon Jae-in who swore to root out corruption as part of his manifesto.

The business is still in the hands of the Lee family and their empire is estimated by Bloomberg to be worth an estimated US$395 billion. The majority of that comes from Samsung’s lucrative electronics division (US$272 billion in value). 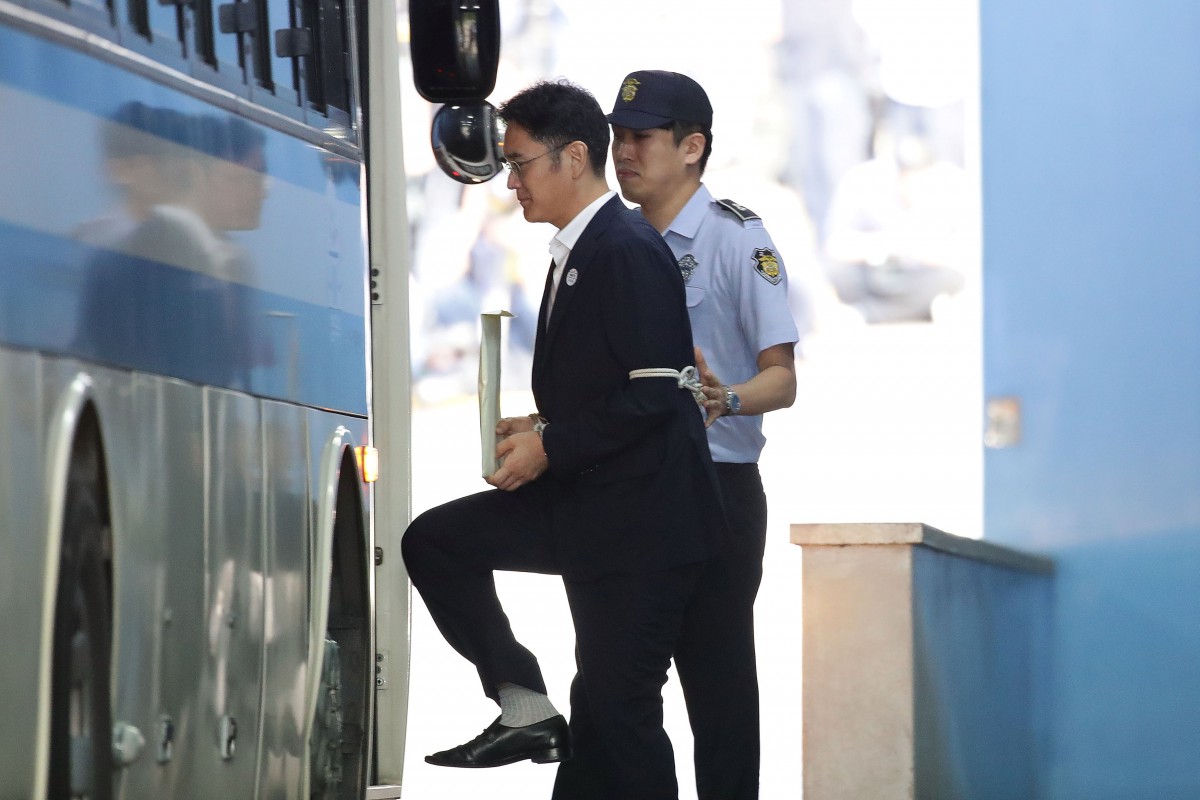 Lee leaves after his verdict trial at the Seoul Central District Court in Seoul, South Korea, on Aug 25, 2017. Source: Reuters

The problem of chaebols has haunted South Korea’s thriving industry by concentrating outsized power and influence in a handful of chaebols. The top five chaebols in the country – Hyundai, LG, Lotte, Samsung and SK Group – contribute more than half of the entire economy’s value, while the families behind them own a collective KRW39 trillion (US$34 billion) in private assets, more money than Seoul’s metropolitan annual budget.

President Moon rose to the top of South Korea’s government largely by riding wave of anti-corruption sentiment simmering in the country. Park was accused of pressuring businesses and chaebols to donate to the foundations linked to close friends – an action that landed her, the friend, and now Lee, in prison.

Here are the details on the conviction and sentencing of Samsung's Jay Y. Lee https://t.co/mD6IEITZGP pic.twitter.com/3qigcQRbmP

As a result of Park’s impeachment of Park, government scrutiny is falling harder onto business dealings in South Korea. Analysts quoted by The Diplomat said Moon’s crackdown on corruption could have a positive effect by displacing some influence, as well as getting rid of the “Korean discount” phenomenon.

However, there are also sentiments Lee’s conviction and Moon’s efforts will likely go to waste – business leaders still wield outsized power in South Korea’s Parliament, and Moon’s party lacks the three-fifths majority needed to push through any meaningful legislation. Upcoming parliamentary elections will likely mean Lee’s prosecution will be the last of its kind in the near future and the chaebols will live to survive another day.