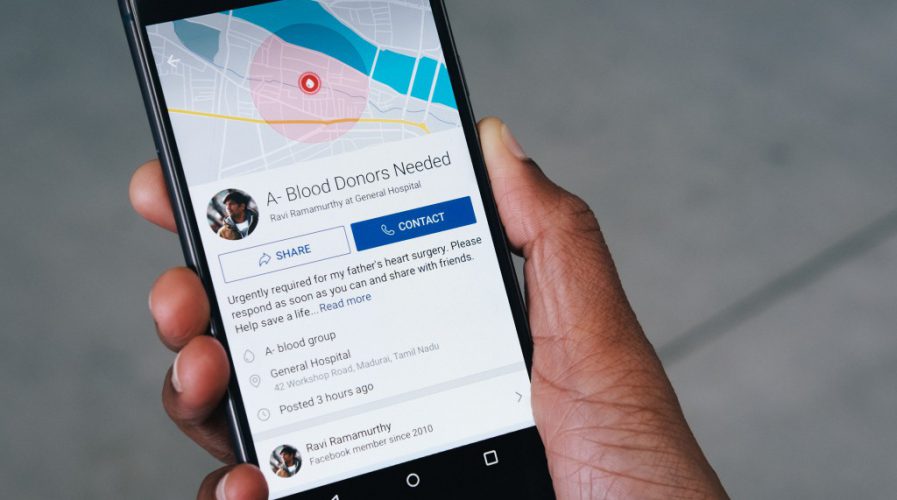 Facebook is leveraging on the power of the social network to empower individuals to contribute to society. Source: Facebook

FACEBOOK has rolled out a new feature targeted at solving India’s blood shortage problems by crowdsourcing donors with the power of social media.

In a blog post on its site, Facebook explained that their service would find “ways to more efficiently bring blood donors and people in need together” by making it easier for donors to sign up as well as connect people with better information about the options available to everyone.

“There aren’t enough people donating blood to meet the demand of people who need it,” the post read.

“In some cases, this shortage leads to patients and their family being responsible for finding donors to replace blood in the blood banks or hospitals.”

“That’s why today we’re announcing a new effort to make it easier for people to sign up to be donors and a new way to connect people and organizations with information and tools to find blood donors when needed.”

Facebook will introduce messages on users’ timelines in order to encourage participation as a blood donor in a program that will launch on India’s National Blood Donor Day on Oct 1. Users can also edit their profiles to feature their donor status, though all information can be made private.

The features will also make it easier to connect donors, blood banks and hospitals with potential donors on the social network in order to eliminate the issue of lack of connectivity between all points in the supply chain. These organizations or even individuals are in need of blood, they will be able to create special posts with information donors would need. Facebook’s algorithm will then alert nearby donors in order to spread the world.

According to NDTV, India’s blood shortage is about 10 percent shy of the required stocks, and that’s largely because of information asymmetry across the country. The country has progressed remarkably in the last 10 years or so, but information in rural areas remains scarce and coupled with unfounded myths and old wives’ tales, it’s unsurprising that there’s a significant issue of connecting potential donors with the facilities to do so.

Needy states like Bihar, where knowledge about the actual process of collecting blood is scarce, have deficits of as much as 85 percent, while richer states like Delhi are able to gather more than twice the needed amount.

NDTV pointed out that the country registers an annual rate of 60 million trauma induced surgeries every year, as well as 230 major operations and 331 million cancer-related treatments, all of which require stocks of blood to ensure that patients are able to safely undergo their respective procedures. The lack of stocks is a severe issue within India’s problematic medical landscape, but one that requires the kind of information network that Facebook can provide.

Facebook worked with several people who had previously used their platform as well as nonprofit organizations, potential and health industry experts to ensure their new product would really make a difference. The features will first be rolled out across Android operating systems and mobile web platforms, the logic being that those are the most prevalent ways in which Indians access Facebook.

“We hope this new feature helps people come together in ways that weren’t possible before,” the company said in the statement.

“By raising awareness and growing the number of blood donors in India, we want to make it easier for people and organizations to give and receive blood.”