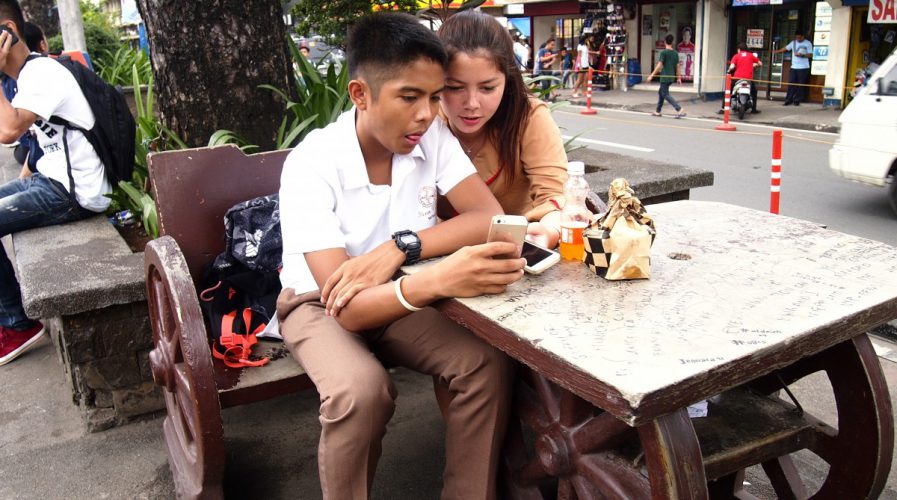 Two Filipino teenagers watch a video on a smartphone at a park in Antipolo City, Philippines. Source: Junpinzon/Shutterstock

Philippines: Mobile Internet sluggish as usual? This deal will change that

THE Philippines might be the texting capital of the world, but the Southeast Asian nation still suffers from subpar mobile Internet services in many of its regions.

Even as the international mobile industry prepares to embrace the emergence of 5G technology, numerous areas in the Philippines still struggle to get something as basic as 2G. In fact, according to Speedtest’s inaugural Global Index released last month, the Philippines’ mobile Internet speed is ranked 100 out of 122 countries.

Philippines is such a joke when it comes to internet. My 3G mobile internet is faster than most wifis over there. SMH. ?

With a landmark deal between one of the Philippines’ premier cellular providers and Gilat Satellite Networks Ltd. being finalized, however, it seems like Filipinos will finally be able to enjoy a superior mobile Internet experience.

The deal between Globe Telecom and Gilat Satellite Networks was formally announced on Monday, with the Israeli tech company publishing a press release on its official website. According to the satellite service provider, Globe Telecom has signed on a five-year, multimillion-dollar service contract, aimed primarily at accelerating the coverage of mobile Internet in the SEA nation.

Through Gilat’s technology, Globe Telecom’s millions of active prepaid and postpaid subscribers would be able to enjoy enhanced 2G, 3G and LTE signals to all the regions of the Philippines. This would be accomplished through Gilat’s iconic Satellite Backhaul for Cellular Network service, which provides premier data and voice services over 2G, 3G and LTE frequencies.

With such a system in place, even the Philippines’ challenging terrain, one of the main reasons behind the country’s subpar mobile Internet service, would be a non-issue.

Commenting, Globe Telecom senior vice-president for Technical Service Design Emmanuel Estrada said he was extremely optimistic about the advantages to be gained from the new Gilat Satellite deal, calling the partnership a “breakthrough” for the Filipino telecommunications company.

“This is a breakthrough project for Globe. By using Gilat’s innovative VSAT technology, we can deliver mobile broadband data services in remote rural areas that previously had no connectivity, in a cost effective manner.

“At the same time, this will allow us to quickly augment our transmission capacity in our 4G network to meet ever-increasing mobile data usage.

“Moreover, this innovative VSAT technology will be used to provide for rapid disaster communications in combination with network-in-a-box technology during catastrophic incidences. We envision this project to improve the delivery of our mobile broadband network for quality and excellent user experience to our customers, especially in remote rural areas.”

SEE ALSO: Reach for the skies: Will the Philippines be Asia’s next space exploration hub?

Abhay Kumar, one of the Israeli firm’s executives in the Asian region, is equally optimistic about the Globe-Gilat partnership. He said the deal would ultimately benefit consumers, finally giving them efficient and affordable access to the Internet.

“We are honored to have been selected by Globe to support their vision of providing high-quality Internet services to all users in the Philippines. This project is closely aligned with Gilat’s strategy and investments to offer outstanding technological innovation as a managed service in support of telecom service providers who are seeking to provide their consumer and enterprise customers plentiful, quality and affordable broadband.”

The new landmark deal seems to have been received by Gilat’s investors, with the Israeli firm’s shares surging 5.3 percent to US$6.00 by mid-morning on Monday.