SPEAKING at the annual developer conference of Amazon Web Services (AWS) “Re:Invent” in Las Vegas on Wednesday, CEO Andy Jassy said, “We are in the golden age of computing”, an age spearheaded by the move to the cloud computing, and therefore, to AWS as a supplier.

“In some years, few companies will have their own data centers, and those who have, their data center footprints will be much smaller,” he said.

The cloud, or everything-as-a-service (XaaS), is certainly changing the way companies use and pay for technology.

Economies of scale have existed as an economic concept since the dawn of man, of course. But what XaaS and cloud utilization in general offer in today’s business environment is lower capital outlay followed by lower maintenance costs for the tech that is organizations’ very lifeblood. 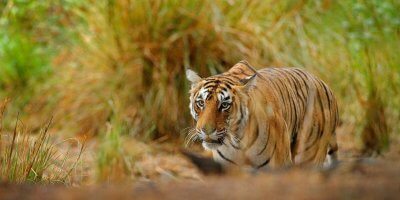 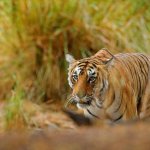 IT’S AMAZON VS. FLIPKART AS TIGER RETREATS FROM INDIA

The benefit of not having to fund massive hardware investments is obvious on the bottom line, and the personnel required to install and cosset the shiny new acquisitions have never come cheap.

Enterprise has seized cloud computing, therefore, as a win-win situation, and evidence of this was present at the AWS developer conference this year, with around 43,000 registrations for the event, up 30 percent on last year’s jamboree attendance.

AWS is Amazon’s most profitable business division, with US$18 billion in sales predicted for 2018, representing a growth rate of around 40 percent on this year.

Amazon’s competitors in the cloud provision arena include IBM, Google, and Microsoft. While AWS was the first large cloud provider and remains the biggest, its announcements at WWDC were, under scrutiny, the company catching up with some of those other’s offerings available to enterprises with a wish-list.

Machine-learning in the cloud will soon be more than just experimentalism for many organizations. Source: Shutterstock

As well as a raft (1300+) of upgrades/new features to existing services including improved search, the following headliners from Re:Invent are either coming on-stream in the foreseeable future or are already available: 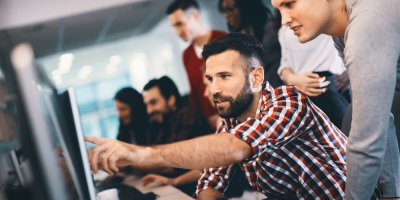 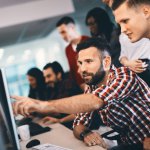 Microsoft and Google, to take two examples, have their own variations on Amazon’s offerings: Microsoft Translator was released in 2011, and Google’s Cloud Platform introduced the Google Natural Language API back in Nov 2016.

Of course, not being first to market for a particular service is not necessarily a bad thing in the technology space, and Amazon’s dominant position allows it more breathing room than most. What is apparent is that the company is clearly unwilling to cede its position to its rivals by being backward in coming forwards and responding to demand.

As the enterprise moves from experimentation with ML to wholesale adoption, the marketplace is getting more competitive, and organizations can expect to see prices drop for such services as competition works its way down to the customer.