How can off-the-peg ERP make the transition to bespoke in the cloud?

Enterprise resource planning (ERP) software has been changing over the last couple of decades, and the differentiating factor between ERP installations and their effectiveness has always been customization.

Some enterprises have moved down the 100 percent bespoke ERP model – that is, software built entirely to order, molded around the existing business model, and specific to that one organization.

While this has advantages in terms of the business dictating every aspect of its technology underpinnings, completely bespoke software has several disadvantages:

Therefore most enterprises use standard ERP software but then customize the package in order to meet specific industry needs and the particular requirements of the individual business.

An entire industry has grown up offering customization or configuration of standard ERP, which ironically, is now bigger in terms of total revenues than the ERP market itself.

But this situation has not been driven by the customization specialists themselves. Rather, ERP users prefer to change the software to suit their specifics, not affect internal changes in order to “fit” the software. The logic of this position is valid: after all, why should the IT “tail” wag the business “dog”?

But there are consequences for the enterprise: configuration is in itself, very expensive, and with each new release of the core ERP offering, each line of customized code has the ability to be incompatible with the updates.

Therefore there’s an expensive process of testing in sandbox environments, plus the customization process becomes a constant cost, even for the software and its ancillary additions to stand still.

What many companies do in this situation is simply to ignore ERP updates, and it’s not uncommon therefore for organizations to be running software that’s six, eight or even a dozen years behind the curve. And that means they’re missing out on the latest features of the ERP offering, plus, the security implications may be catastrophic.

Like many areas of enterprise technology, the implications of the cloud for ERP are changing the game. By moving away from in-house hardware (and its associated capital and on-going costs), companies are moving to a scalable, global and on-demand range of services, available online from any connected device.

Around 20 percent of ERP solutions are now cloud-based, a trend which is chasing ERP’s most common subset, customer relationship management (CRM) solutions, which are cloud-based in around 60 percent of cases today.

Of course, this trend is worrying the customization specialists, as cloud-based ERP solutions can not, by definition, have core customizations applied: the software simply isn’t under their control.

Some enterprises are accepting this situation, and adopting new working methods according to the cloud software’s stipulations: adopting the advantages of the cloud and adapting their own practices accordingly.

But the leading edge ERP software developers are changing quickly, and the best solutions now offer the best of both worlds:

The best ERP suppliers will now allow their users to alter their individual instances of the software: add fields, create new tables, define specific reporting tools and so forth. In this way, organizations can use bespoke data and processes to create unique offerings which are effectively abstracted from the core ERP.

This brings new challenges to the ERP customization industry but does not negate their value or diminish their role. As tertiary suppliers, they have always had to adapt. It’s effectively a new type of configuration, based on open standards and APIs.

But for the ERP supplier’s clients, all the advantages of both worlds can be leveraged. The agility offered by cloud-enabled  ERP, plus required customization specific to individual enterprises’ needs and industry requirements.

Malleability does not have to be sacrificed on the altar of the cloud!

Here are three suppliers of the next generation of ERP solutions which we at Tech Wire Asia think you should consider as the enterprise moves inexorably into the cloud:

One of Infor’s many successes in the last year (the company has seen massive growth in the last 12 months) has been the Valmet Corporation, which migrated from a Baan IV installation with 5,700 customisations to Infor CloudSuite with precisely no customizations required. Valmet, a Finnish company with projected €2.6 billion ASEAN sales in 2018, had considered SAP and Oracle but chose Infor for its cloud solution prowess – reflected in Infor’s US$3 billion investment in its cloud offering made in recent years.

In three years, Infor has grown its cloud revenues from two percent to 65 percent of its total licensing revenues and now boasts 71 million cloud users from 8,500 customers.

The company’s growth has been supported by the alliance which it developed with AWS three years ago; Amazon’s global reach has allayed the fears of organizations which were reticent about working with US-based Infor.

Success stories include Ferrari, which has implemented Infor software to modernize its factory at Maranello. Every Ferrari is now personalized to the individual buyer – a process that would have been impossible without Infor.

New product announcements (made at Inforum 2017, Infor’s flagship customer event in New York City) include a dedicated AI platform for ERP, named Coleman, and the confirmation that Infor’s foundations have been reinforced with an investment of US$2 billion from Koch Industries; Koch itself will implement Infor CloudSuite for its HR and financial functions.

“Koch invested in Infor not only because of its high-growth trajectory but because of the transformative effect Infor applications can have in supporting expansion and growth at Koch Industries.”

To read more about Infor and its work with manufacturing and other industries, click here. 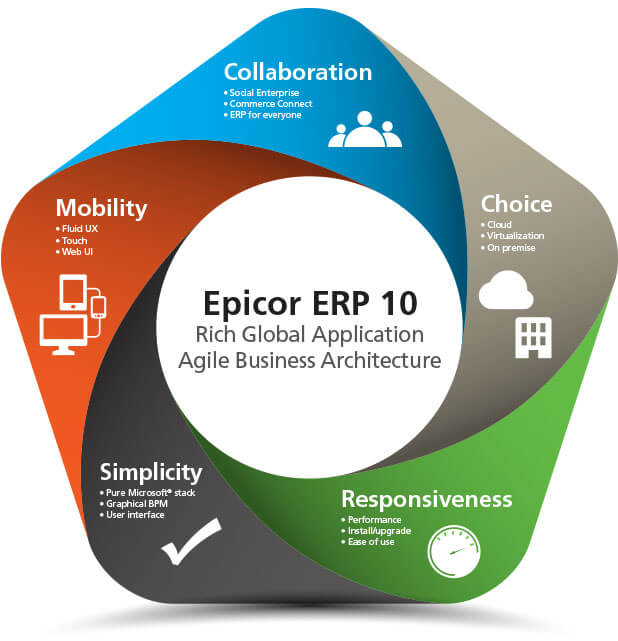 In the last two months, Epicor’s new CEO Stephen Murphy, fresh from OpenText, the Canadian enterprise information management company, has been touring the world, meeting the company’s clients and staff.

Murphy is well-aware that his company’s basis is software, so he has also taken time to meet with, and listen to his in-house developers – they are recognized as the company’s powerhouse.

Epicor boasts around 20,000 customers in 150 countries, and the company offers a range of products as well as its ERP solutions, including CRM software and supply chain & HR management products.

While the company’s software is primarily offered to manufacturing, distribution, and retail concerns, its reach is broad enough to be able to be deployed across almost any enterprise. Current customers include Unilever, Energizer, and Electrolux.

The market for enterprise-level ERP is a competitive one, and the big players include names such as Oracle, Microsoft, and SAP. And while some may be swayed by the mention of these titans’ names, Epicor is keen to stress its advantages in terms of outcomes to the enterprise’s bottom line.

Epicor offers a range of deployment options, from a 100 percent cloud-based platform, to an in-house solution, such as the company’s wholesale distribution software, which is Windows/SQL-based.

Despite the concerns of the various international competition overseers, Oracle’s acquisition of NetSuite looks set to cement the two companies’ relationship. After all, Larry Ellison of Oracle owns over 40 percent of NetSuite stock, and the companies have always worked closely.

NetSuite’s market position has been greatly aided by the presence and might of Oracle, and the company now boasts 40 thousand customers worldwide. Oracle’s database background is reflected in the technical underpinnings of NetSuite, with a unified data model underpinning all areas of the company’s offerings, from HR to finance to back office functions.

This uniform structure is fronted by NetSuite’s cloud-based interface, which allows information to be presented on any platform, from the desktop through to connected smartphone.

NetSuite claims that as the core system updates, discreet customer configurations and customizations are not affected, as they exist in a discrete layer above the central data system.

While NetSuite is suitable for businesses of all types, its marketing efforts are aimed largely at small to medium businesses. Its production management offering, for instance, offers software oversight and management of sales orders to work order processing, routing & scheduling, plus product costings.

And the company’s global underpinnings ensure that currency manipulation, timezones and localization according to specific, localized requirements are baked into the offering’s DNA.