Networks are the foundation of smart cities, but who’s monitoring them?

The internet of things is looking lucrative: according to some estimates, the total investment in smart cities is set to rise from US$13 billion as measured in 2017, to US$28 billion by 2023.

So, what defines a smart city? According to market analyst Roland Berger, the three areas which affect the technological advancement of any urbanization are: 1. Specific areas of application, 2. Strategic planning, and 3. IT infrastructure. The Smart City Strategy Index indicates which cities are becoming “smarter”.

A smart city strategy has six fields of application: health, education, energy and environment, buildings and mobility – covering just about every area of public administration. The technological intricacies of a smart city depend on both bottom-up (citizen) activities, and top-down (government) measures, requiring synergy between the two.

Singapore is a prime example of where these two elements come together. The nation-city presents something of a paradox: highly connected citizens, technically advanced infrastructure, and a forward-thinking government, yet traffic problems and pollution are very real challenges.

The city represents an excellent proving ground for smart city tech, and in Roland Berger’s surveys of dozens of cities around the world, was in the top three of the world’s most technologically connected cities.

The haze which blights Singapore on occasion is caused by a sudden rise in particulates – for instance, caused by Sumatran farming practices at the beginning of the dry season. The particulate matter at a granular level can be visualized using PRTG Network Monitor from Paessler. PRTG can hook-in to systems collecting sensory data and display the data in a digestible format. Thresholds and fault notifications can be used to inform the city authorities if pollution levels are getting critical. 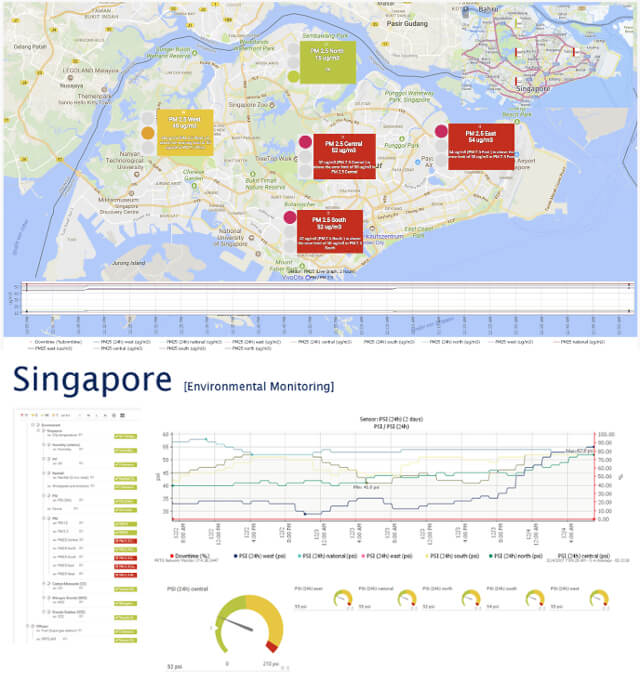 Armed with this type of information, a host of interconnected technologies can be employed, such as traffic management measures to limit flows into badly-affected areas, and inform the local population of potentially unpleasant conditions. Public transport frequencies can be altered to move passengers quickly in and out of specific areas, and even street lights could be told to adjust their pre-programmed timetables, perhaps coming on earlier and staying on later.

Already, the smart city’s sensors and connected platforms can provide figures on noise pollution, wind velocity, temperature, ozone, carbon monoxide, nitrogen dioxide, and specific road conditions: all this can be collected, stored and analysed by PRTG.

The network and infrastructure underpin the systems and sensors monitoring the environment and ‘Things’ in smart cities. Clearly, the hundreds of constituent parts of a smart city cannot function without well-managed data flows. Here is where Paessler’s unique capabilities come into play: monitoring the infrastructure and ensuring the technologies which piggyback the IoT network perform as they should.

As the IoT pushes network traffic exponentially higher, the need to ensure bandwidth is handled effectively grows similarly. Using a platform like PRTG to pull together a range of data (from QoS, platform uptime stats to cloud availability) means teams, on which the smart city rely, can pinpoint problem areas and address them before the impact hits users e.g. public garbage containers can be emptied before overflowing onto the street.

Cities grow organically and the technology which makes them “smart” evolves – there is no real possibility of building massive new infrastructure from scratch. Realizing this, smart city and IoT pioneers know that the nature of smart technology is effectively a mismatched set of protocols, data and information. While data differences can be assimilated easily enough, the network’s health is the single most important element: monitoring a city that’s smart needs to be done intelligently – and that’s Paessler‘s role.