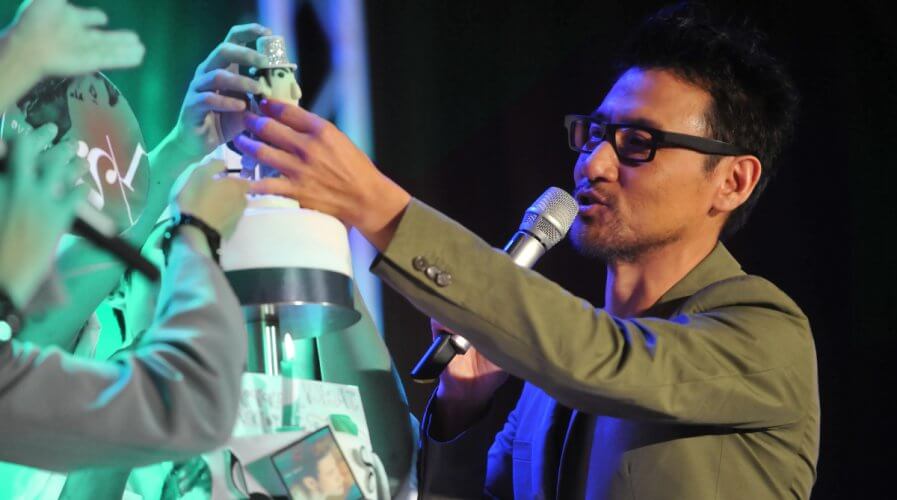 Chinese concerts aid fight against crime, thanks to AI

Of the approximately 20,000 audience members attending a Jacky Cheung concert at the Jiaxing Sports Center Stadium in Zhejiang, the software picked out a suspect under investigation for the alleged theft of US$17,000-worth of potatoes.

“A few minutes after he passed through the security checkpoint, our system issued a warning that he was a wanted person,” said Shen Yueguang, from the Nanhu District Public Security Bureau.

Rather than being identified by means of his hefting an incredibly large burlap sack, the criminal was fingered after the camera/software combination cross-referenced his features against a database.

Last month, a man wanted for “economic crimes” was arrested in Jiangxi province after facial recognition systems detected him at a Cheung concert among 60,000 other attendees.

Another Cheung-based warble-athon in Fujian province yielded a further AI-driven arrest by police this month, according to the South China Morning Post.

Chinese authorities seem keen on facial recognition technology and have few of the problems potentially found in other countries caused by concerns vocalized by civil rights groups.

The Chinese are planning a network of camera systems that will survey roads, malls, transport hubs and public buildings across the country. Called “Sharp Eyes,” the project aims to track suspects and monitor the country’s 1.4 billion people.

The US’s largest supplier of police-issue body cams, Axon (formerly the charmingly-named Taser International) is considering using AI in its products for use by police patrols.

The concept is that officers can get an automated warning if they approach a known felon in the line of carrying out their duties. The company has created its own AI ethics board to guide development in this contentious area.

Technology which uses machine learning to predict crime hotspots (among other uses) has a checkered past, of course, with economic and ethnic bias being applied unduly to police activity – critics have claimed.

While freedom of speech activists, civil rights agitators, and technophobes may well rail against the emergence of this type of facial recognition tech in law enforcement, there is clearly enough demand for it in traditional policing for a viable market to exist.

Turning up to a Jacky Cheung ballad-fest while appearing on China’s-Most-Wanted list is probably not a good idea for the foreseeable future, however, given the Chinese enthusiasm for technology.