The internet wasn’t envisaged or constructed as a secure communications platform.

Its primary purpose meant that it evolved as a way of communicating which could re-route itself if necessary through multiple nodes. And its first users were the high-end academics and military personnel whose gentlemen’s agreement mentality meant that the system’s safeguards comprised, effectively, of a network of mutual trust.

The first security measures placed over the top of networks consisted of perimeter devices like firewalls, and the effective quarantining (or at least separation) of potentially troublesome data in VLANs.

There was a natural progression from these first methods, as successive generations of devices and cybersecurity methods evolved alongside the advances made by hackers; each side in the ongoing war attempting to outwit one another, and steal a march on the other’s next move.

With UEBA, users’ (both internal to and outside of enterprises) interactions are compared with expected behavioral norms. Therefore, activity in general rather than rule adherence is added to the SOC’s security palette. Of course, any infringements still needed to be flagged with alerts (albeit coming from a different type of source).

Some commentators point to UEBA is a potential powerful cyber defense technology, as the high quantity of data that can be gathered is well suited to machine learning algorithms. The constant analysis may further refine machine definitions of online behavioral norms, and therefore improve overall threat intelligence – time will tell.

As it stands, the variety of security devices, each with sets of rules and flagged events, creates large amounts of data, as records of anomalies, possible threats, non-standard user or entity, and unexpected network activity. 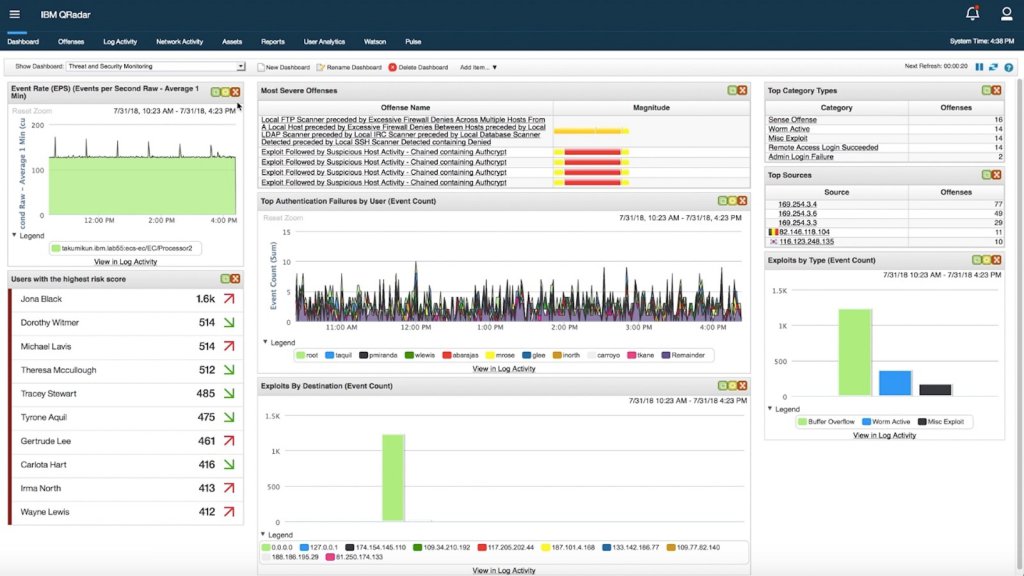 The problems facing security teams aren’t necessarily that bad actor protection measures do not work. Rather, the defenders of the business are just overwhelmed with data. As any visual artist will tell you, too much of the color red in a picture’s palette obscures any danger signs that also happen to be red.

False positives are a problem, naturally, and the process of reconfiguring rules and alert levels becomes nearly as troublesome for SOCs (security operations centers) as manually combing through log files, line by line. As new generations of equipment and software come online, the mix is thickened and made more complicated.

The same vendors supplying defense solutions often supply SIEM systems (security event and information management), which are a sensible answer to the overload. SIEM solutions provide a single point of reference for disparate systems – amalgamating proprietary alert and log formats in one place so that presenting and historical issues stand out significantly.

SIEMs now provide interfaces which help audit data practice and point out possible points where non-compliance either is or may be an issue. 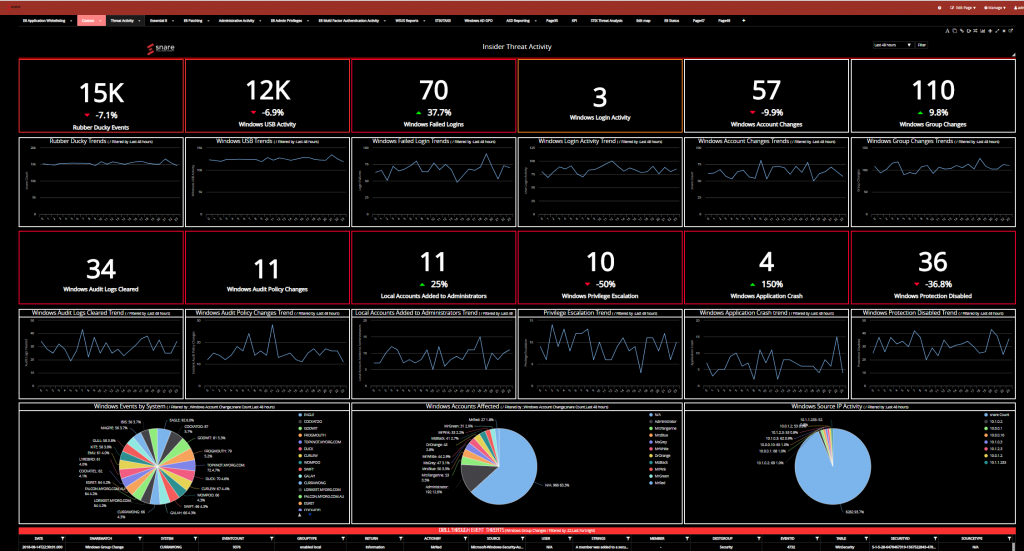 At Tech Wire Asia we’ve examined two SIEM solutions which we feel warrant your consideration. If you’re considering changing your security management system, or are taking the next step up to automate your existing SOC’s operations, read on. Some aspects we think you might consider:

Prophecy International’s threat management platform is Snare, which works both with its own Snare Agents and any open source or proprietary security agents. Snare Agents are particularly lightweight, but their use is not mandatory; Prophecy is keen that its solutions can happily sit alongside any existing legacy SOC tech and SIEM. 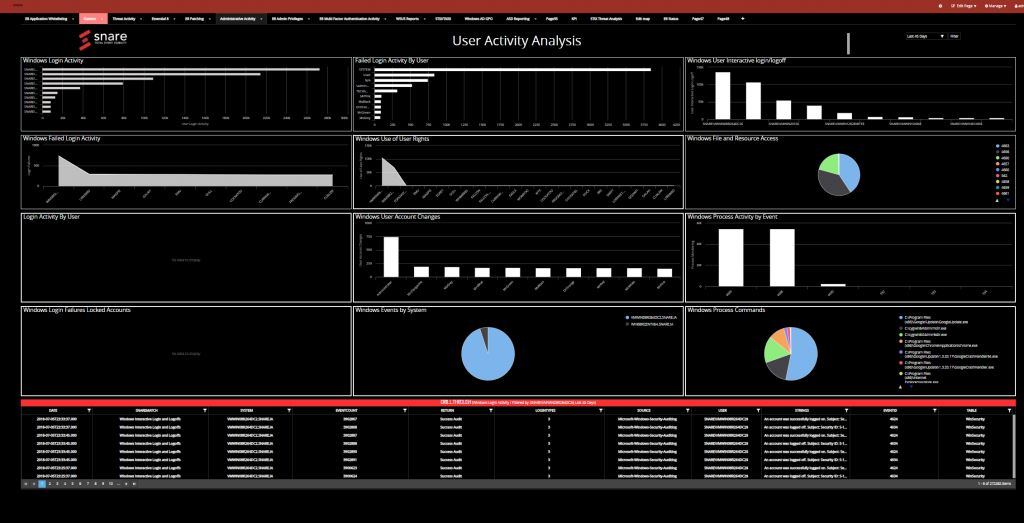 Snare Server conglomerates events in real-time and from logs, parsing unlimited data sources. Unlike some of its competitors’ offerings, there’s no “per-log” charging – sources can be added to or dropped at will with no licensing worries or threat of increased costs.

Snare is not, however, a vanilla logfile analysis tool. It allows a proactive security stance to be adopted by SOCs, with real-time threat intelligence created by data aggregation of disparate sources – powerful (and dare we say, even attractive) dashboards can be built on the fly, as can insightful reports.

Snare comes with a massive range of data connectors, and its agnostic architecture means security policies adhere to the organization’s strategy rather than having to conform to the specifications of another vendor’s systems.

Prophecy has placed a great deal of emphasis on ensuring the SIEM drives data compliance according to your geographies making Snare ideal for any business that crosses continents. There are full security accounting routines & reports, and forensic level of data analysis (plus a powerful, lightweight archiving system).

Snare’s SIEM comes as a cloud app or can be installed in-house. It’s lightweight yet feature-rich, and can pull information from an unlimited number of sources right across the enterprise: server room to the HR department, finance function to cloud SaaS apps, via existing SIEMs and legacy security stack.

You can read more about Snare and Prophecy International here.

IBM’s QRadar Security Information and Event Management solution helps detect and prioritize threats and reduces the impact of incidents – both by minimizing false alerts and by more accurate determination of intrusions or unusual network activity.

QRadar is available on premises and in a cloud environment, and so perhaps unsurprisingly, can draw from data sources from edge to bare-metal to cloud.

Not only are related activities correlated, but the results can also be prioritized according to how sensitive the area is that might be under attack.

Parsing and normalization of logs from diverse sources (including STIX/TAXII) is a painless process, with out-of-the-box integration to over 450 security solutions commonly found across the enterprise.

The ensuing database of data is highly scalable, self-tuning and essentially self-managing. Both external regulation & compliance requirements, as well as internal policy & reporting needs, are met – plus, for those organizations who don’t wish to invest in their own SOC team, the whole SIEM solution is available as a service from Big Blue.