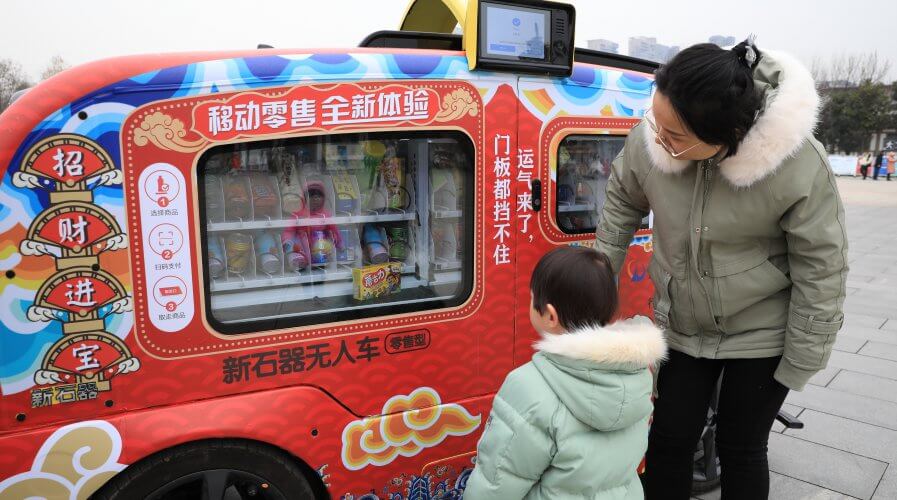 Autonomous vehicles could help us weather the coronavirus

The world is currently seeing how technology can be put into use for the betterment of the public, on a grand scale. In the thick of the disruptive coronavirus outbreak, various technologies have been deployed to aid China’s efforts in containing the virus and attenuating its effects.

One such example is the deployment of robots and various autonomous vehicles to deliver grocery and food orders to customers, part of an ongoing effort to mitigate the risk of spreading the deadly coronavirus through human-to-human contact.

The delivery app Meituan Dianping is behind this ‘contactless delivery’ initiative that was launched last month in the Shunyi district of Beijing. According to the company’s spokesperson, the vehicle is capable of carrying up to 100 kilograms of goods and can deliver three to five orders per trip.

While this is the first time the system has been piloted on public roads, the e-commerce giant had already tested robots and autonomous for home deliveries extensively since last year, but trials were carried out indoors.

This initiative spells good news for those in the food delivery industry, which have been taking severe blows as people fear potential infections caused by human contact, although it may be a push for many companies to deploy the technology themselves.

Using autonomous vehicles for delivery extends beyond food or groceries, however. Beijing-based JD.com has plans to deliver medical supplies as well. These vehicles can fulfill 50 percent to 70 percent of deliveries that go in and out of Wuhan’s Ninth Hospital, which is at the epicenter of the current outbreak.

The vehicles negate the need to send physical couriers, unless the packages are too large to be placed inside the vehicles, or if there are too many orders simultaneously.

Yang Xu, a senior analyst at the research firm Analysys, noted that while unmanned delivery services existed before the epidemic, the outbreak has the potential to highlight the extraordinary capabilities of autonomous vehicles, and even help some businesses weather the storm.

However, Yang cautioned that “Companies will face challenges because real-life situations are complicated, with interactions between people, roads, and building to take into consideration”.

Autonomous vehicles aren’t just being deployed in the services industry, though. China is also deploying robots and drones to disinfect hospitals remotely, while there are unverified reports of law enforcement using loudspeaker-equipped aerial drones to supervise the public, and direct individuals to go back inside or return to quarantine areas.

Drones have joined fight against novel #coronavirus (COVID-19) in China. Equipped with thermal imaging technology, they can detect those with a fever up in the air. Check out drone patrol in central China’s Hunan pic.twitter.com/BP6ZTYTdkA

The takeaway from this is that technology deployment has the potential to change the tide when it comes to businesses. It is simply about identifying current needs, being sensitive to the trends of the market, and finally utilizing the right solution.