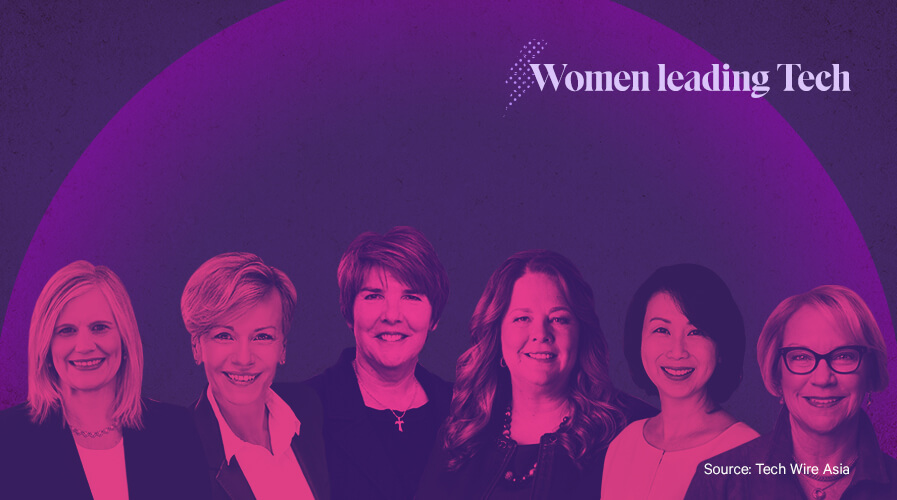 Six female champions of the global tech scene in 2020

It’s an obvious point to make today, but the situation isn’t helping businesses. The pressure to prove gender diversity on the company roster is one thing, but there is evidence to suggest that women collaborating in teams and in leadership roles has a tangible impact on the business’s bottom lines.

In short, women in the boardroom makes business sense.

Ahead of International Women’s Day (March 8), Tech Wire Asia, along with publications under Hybrid, set out to draw a picture of the state of female leadership at the world’s highest-earning companies.

Focusing on CIOs, CTOs and equivalent tech leadership roles, in particular, Tech Wire Asia has collated a list of six of the most powerful women in tech from across leading global markets.

Below, we have attempted to tell some of their story on the path to leadership in technology in an effort to showcase the diversity of skills, backgrounds, and values that are driving the digital progress of globe-straddling corporations.

By showcasing these individuals, though representing just a handful of the powerful women in tech today, we hope to inspire business leaders to champion progressive recruitment and promotion strategies, in order to leverage the power of women in tech. 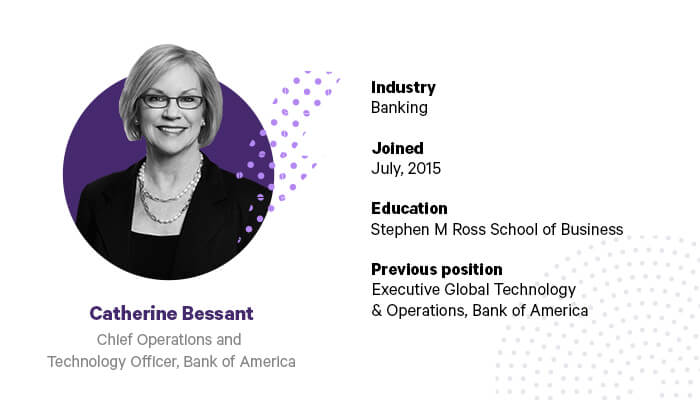 From Shakespeare to AI, Bank of America’s Catherine Bessant shows not all CIOs have to be techie by degree.

In becoming one of the most influential figures in the financial industry, Catherine Bessant’s achievements in finance and technology led her to rank number one in the “25 Most Powerful Women in Banking” for three consecutive years by American Banker.

Under her leadership, Bank of America’s (BoA) virtual assistant Erica was launched and, to this day, remains one of the company’s most popular and impactful tech initiatives. On the infrastructure front, she led the firm’s rationalization program, retiring more than 18,000 applications, consolidating 65 data centers worldwide to 16 by year-end, and as a result, cutting down company expenses by a quarter (26 percent) since 2013.

Setting the standards as a thought leader in the industry, Bessant recognizes the slow emergence of women in STEM subjects and is adamant in making changes.

In her own company, close to half of the top 3,000 employees at the department of Global Technology and Operation are women. However, the number drops as one ascends the corporate ladder, among the technologists that report directly to Bessant, just one is female.

“It doesn’t take long in the technology space to realize that there aren’t enough women,” said Bessant.

The award-winning banker relentlessly advocates this belief and is part of Women in Technology and Operations (WIT&O), a community that supports the professional development of female talent in the company. 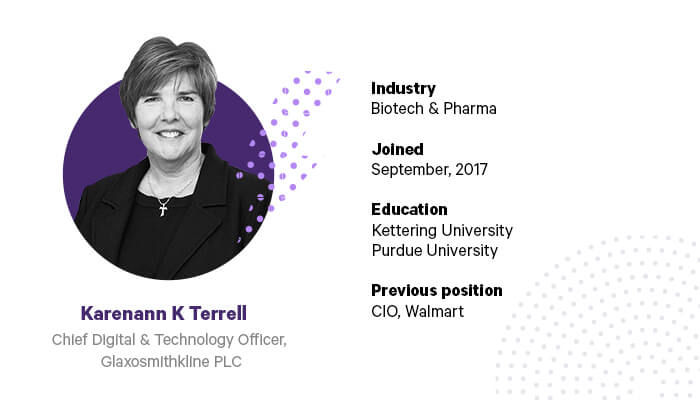 From putting the “first Bose radio into a Cadillac car,” to leading the race to digitize big pharma.

On Karenann Terrell’s appointment in 2017, Emma Walmsley, Chief Executive of GSK said the impact of technology on the healthcare industry was requiring the pharma giant to “rethink our approach”. Terrell, she said, had “the scope to think radically about how we can exploit the latest opportunities.”

Indeed, coming from a former role as CIO of tech-driven retail powerhouse Walmart where she led a multi-year effort to transform the firm’s use of data, analytics and digital engagement with customers, it’s safe to say Terrell knows how to lead global brands through tech transformation — and the life sciences industry has historically been slow to keep pace.

Implementing these disciplines into the fabric of GSK, “disruption” is the focus of Terrell’s company-wide remit of transforming how new technologies from inside and outside the healthcare sector are used to enhance performance across the group.

Terrell wants to improve how the firm interacts with healthcare partners, customers and consumers, and bring new efficiencies to internal processes.

On technology in drug development, Terrell has said: “Any digital and technology capability has got to really reimagine the experience of speeding drugs through the pipeline from the point of discovery, all the way to ‘bedside’ medicine.

“I think the drug development cycle is absolutely awash with digitization and technological enablement, not just at GSK but across the industry.”

On lessons from Walmart, she said: “Don’t wait for the opportunity window of someone to try and attack your business before you respond — understand and see that coming a mile off.”

Asked about becoming the CTO of a pharmaceutical company, Terell said “don’t take notes.” An electrical engineer in training, and having worked in the automotive industry for the first leg of her career, Terell said she “put the first Bose radio into a Cadillac car,” before moving to her first role in pharmaceuticals. 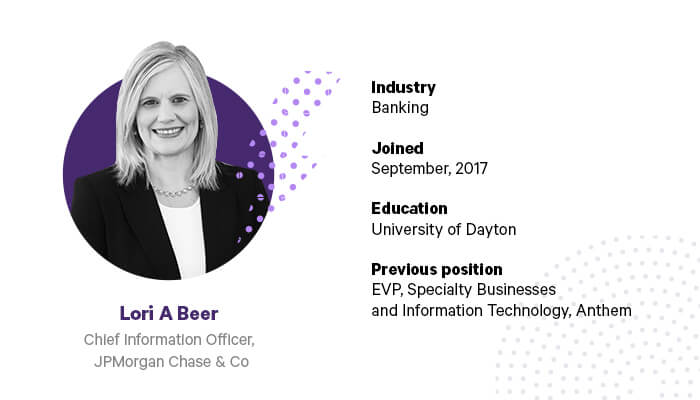 The CIO leading the charge to automation and AI in finance.

As the multinational bank and investment firm’s CIO, Lori Beer is a thought leader with future-forward ideas. Recognizing the importance of AI and next-gen technologies, she is progressive in vision and strategy.

Chairing at the operating committee, she integrates emerging digital solutions and monitors the acceleration of technological advancements, activating the transformational value of new technologies with a massive team of 50,000 technologists under her watch.

Beer manages an annual budget of US$11 billion, including JPMorgan’s diverse portfolio of retail, wholesale, and wealth and asset management businesses. Not only does she drill into the core of emerging technologies and the practicalities of its adoption, but also expands AI capabilities towards igniting a broader impact across communities.

“I do think we are uniquely positioned to really have an impact on how AI will address social-economic issues that provide wider access to financial services in our communities,” said Beer.

As a visionary leader, Beer is seasoned in the fast-moving landscape of finance and the prominent role of technology in this progressive sector. Her concern for the widening skills gap pushed her to champion programs that open doors for diverse talent in technology.

“As our people are our most important asset, we will continue to place an acute focus on attracting, retaining and developing top technology talent,” she said. 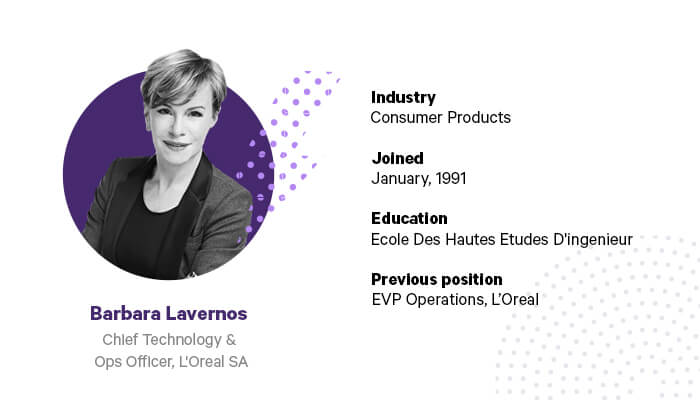 An optimist and keen life-long learner, Lavernos is adamant that adaptability is key to success today.

Barbara Lavernos leads with agility in mind. As the Chief Technology & Ops Officer (CTO) at L’Oréal, she believes in ingraining industrial agility in every core process of production from designing to manufacturing.

With a 29-year tenure under her belt, Lovernos has developed crystal vision for how she can foster the company’s growth in the digital age.

Spearheading the brand’s global transformation efforts to meet the demands and expectations of a diverse consumer market is one of her key responsibilities.

Lavernos leverages customer insights when making important business decisions, such as understanding consumer habits from a study of 10,000 passengers across 15 different airports. By knowing “the way they behave and purchase,” Lovernos tailors marketing strategies to address the unique cultural elements of each country.

“We have all these strengths inside L’Oréal, and I want to offer those strengths to key retailers, who in turn have the strength of knowing who is coming into their shops.”

Innovation is also a critical aspect of transformation for L’Oréal; that manifests itself in envelope-pushing projects, such as the brand’s in-house 3D laboratories by leveraging advanced capabilities like augmented reality, exploration into collaborative workplace robots, and application of machine learning and AI in supply chain optimization. 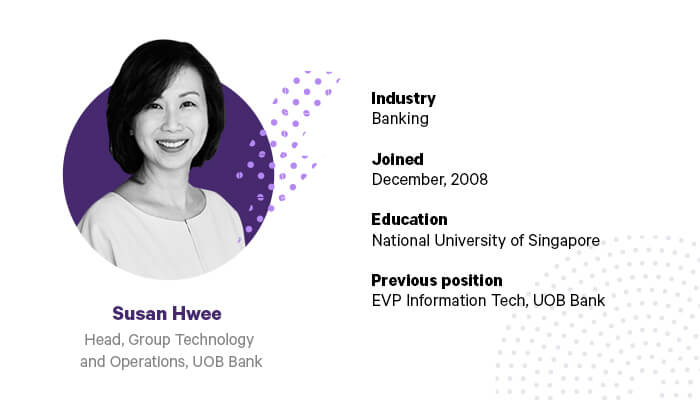 To Susan Hwee, the customer should always be in the center of a strong technology architecture. To this end, she has driven multiple initiatives to push customer-centric innovation forward.

Under Hwee’s leadership, UOB now has standardized systems and processes to manage core and digital banking, operations and infrastructure. Because UOB is a regional bank operating in 19 countries, having such core banking systems allow services to be easily deployed to customers.

Technologies like AI are highly utilized, such as in multilingual chatbots and AI-driven real-time insights.

Hwee also believes that inclusivity is a sustainable business practice. She has spearheaded initiatives that transform clerical roles into work opportunities for autistic individuals. Often, these roles require a keen eye for detail and great focus, all of which are qualities that can match the abilities of an autistic individual.

On staying relevant as a technologist in the banking industry, Hwee thinks that there is a ‘real need’ to keep in touch with the development of technology, and “constantly think of what is possible.”

“One of the moral hazards of this profession is we always think about risks first. What’s important is to stay adaptable ahead of the learning curve, and think of the possibilities, because what’s not possible today might be possible tomorrow.” 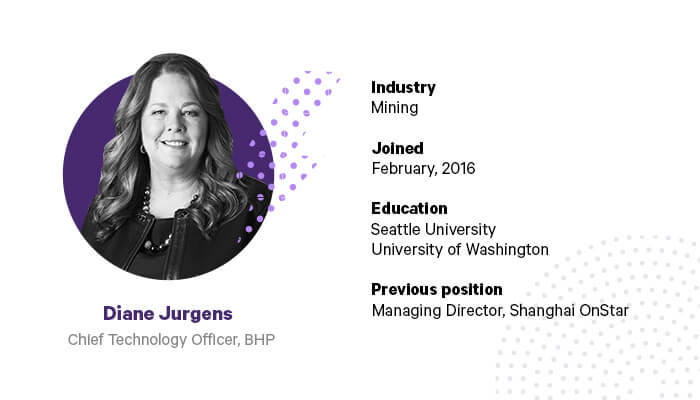 Over three decades of experience in leading technology teams in 25 countries, Jurgens has a global perspective.

Diane Jurgens was appointed BHP Chief Technology Officer when the organization was making significant efforts to simplify its operating model to accelerate productivity and value creation.

That was back in February 2016. Just around her three-year anniversary mark with the company, BHP Chief Executive Officer Andrew Mackenzie was delighted by the work that Jurgens had put in.

“Diane Jurgens has been instrumental to BHP’s innovation strategy, which has created more efficient, connected and safer operations,” said Mackenzie.

Having been educated as an engineer earned her stripes at Boeing’s Defence and Space Group, and working with cutting-edge automakers in the US and China, Jurgens came to mining with the view that BHP needs to push the boundaries that conventional mining imposes.

“We need to connect our workforce, data, and systems. We need to replicate existing technology from other industries and more importantly accelerate innovations to make our work safer, more productive and energy-efficient,” she told her team, peers, and industry colleagues.

In her first year, Jurgens worked on ‘globalizing’ the company’s technology function. “It now spans research and development, program delivery and technology operations along the value chain that converts reserves into marketable resources,” a proud Jurgen told delegates at the 2017 International Mining and Resources Conference.

Since then, BHP has been credited with several innovations, including the use of AI and machine learning, which is common in banking and financial services but quite difficult to deploy in the mining industry.

“We’re using machine learning and a lot of other technologies to give hidden insights into what’s under the ground so that we can efficiently find and extract the material,” Juergen told CNBC.