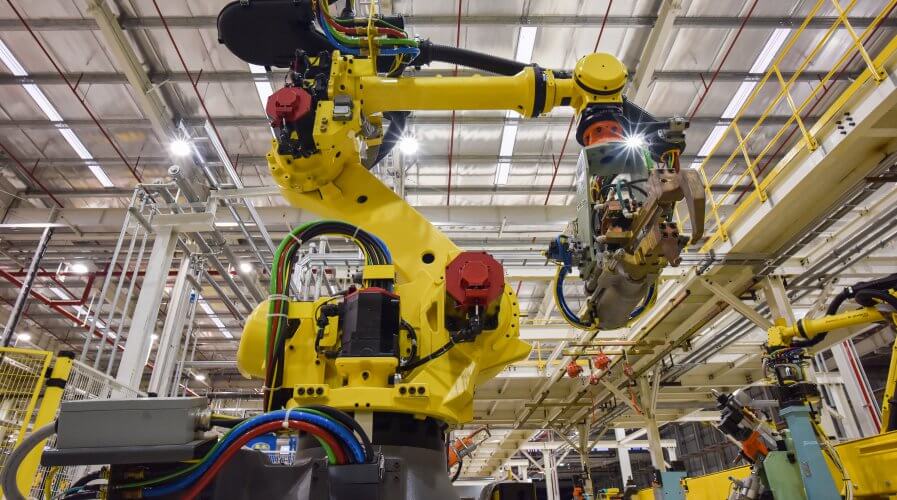 The industrial robotics sector could be catalyzed by the current disruption as enterprises realize the potential for automation and remote operation technology to reduce their reliance on people power.

We’ve seen robotics on the rise in warehouses, factories, and even agriculture, for decades now, but many businesses will have been putting off substantial investments and costly integrations.

COVID-19 and the economic impact of social distancing orders may be the impetus for many businesses to wipe the slate clean and take the steps necessary to overhaul their operations with automation and robotics technology.

That’s theoretical for now, but the confidence certainly seems to be there. At the turn of the month, The Motley Fool reported that the shares of two leading robotics manufacturers – ABB and Rockwell Automation – shot up following quarterly earnings reports.

That was despite both firms cautioning that coronavirus-related shutdowns were taking a toll on the quarter, and forecasts that sales will be hit by the impact of ongoing lockdowns in Q2 and a subsequent “sharp drop in demand.”

This investor confidence doesn’t seem to hinge on these firms helping businesses manage workforce shortages now, or even in the coming months.

The situation’s more complex and there are many other factors at play. While robotics would have helped some businesses manage the current situation, these are ‘unprecedented’ circumstances for even the most well-automated enterprise.

For example, UK grocery retailer Ocado – whose picking and distribution hubs are built on massive-scale robotic automation – was unable to handle the surge in demand in March as UK residents flocked to online grocery deliveries to avoid supermarkets.

Instead, the bullish outlook seems to be founded on the idea that this current disruption will lead to a resurgence of interest when industries are ready to regroup, take stock and spend again on transformation.

When business begins to spin up, companies will have to keep coffers closed for an extensive period in order to manage and survive the economic downturn. When the market begins to return to normal, businesses will want to direct spend in a way that can ensure operations are optimized to avoid downtime again in future crises – and automation is certainly a tool to help them do that.

COVID-19 has hit the ‘off-switch’ on business-as-usual, and that presents a chance (and little excuse not) for businesses to reboot with new operating systems.

The Motley Fool cited IDC reports that that 70 percent of companies in its supply chain survey said robotics will be important or very important within the next three years. It’s this longer-term window that investors in ABB and Rockwell Automation are hedging their bets on today.

“Robots have been replacing humans in certain jobs for some time, but the COVID-19 crisis is accelerating the process,” said Wafaa Hassan, Thematic Analyst at GlobalData, a leading data and analytics company.

While sectors like manufacturing and logistics will be the most fruitful for robotics firms down the line, Hassan noted that even in sectors like retail, Walmart and Kroger have been robots have shown their worth in functions such as floor-cleaning – another area that will now be a safety concern for customer-facing businesses, hospitality being another.

Brain corp, which those aforementioned retail giants have been using for years, announced a US$114 million series c funding round led by SoftBank in 2017, and is in position to quickly fulfill large scale orders of “intelligent autonomous machines” to businesses. Walmart, amid the pandemic, announced plans to add an additional 1,500 robotic floor cleaners.

“Robots will show their worth by performing tasks that human workers are unwilling or unable to do,” Hassan said.

“The COVID-19 crisis will ultimately increase the use of robotics across all industries. Primarily, they will be used for support functions such as cleaning and packing. However, as consumers get more familiar with them and the robots themselves become smarter, they will increasingly be used to support customer-facing tasks.”

While in the technology sphere we’re seeing spikes of interest in areas related to remote working or telemedicine, for example, the robotics industry may leverage this current tectonic shift for a longer play.