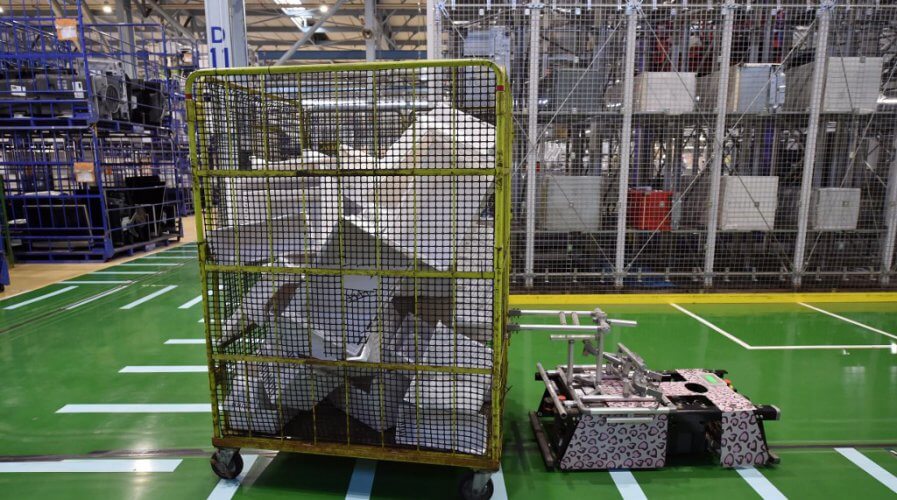 With mountains of waste and other refuse not being managed properly across the continent, Asia has a substantial environmental hazard on its hands. Recycling robots might be able to lend a mechanical hand, and we should take the opportunity before the problem reaches truly critical levels.

The World Bank says that 2.01 billion tons of municipal solid waste is generated globally every year, and more than half of that (1.19 billion) is generated in the regions of South Asia, Europe, and Central Asia, as well as East Asia and the Pacific.

Generally more high-income regions, such as Europe, will have better waste collection infrastructure, up to 96% in some areas. But in lower-income nations such as many in Asia, only 39-51% gets collected for proper recycling.

Issues with garbage collection is a major reason for poor waste management, since many Asian regions of high population density contain vast spaces of urban sprawl with poor urban planning and overstretched civic amenities, like in China and India. 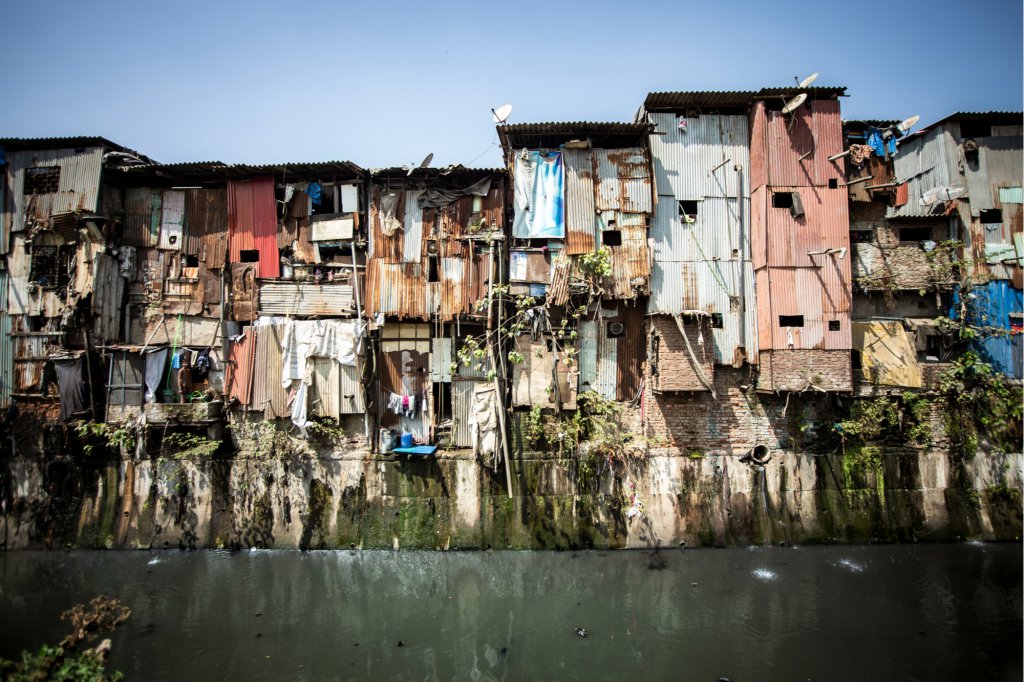 Garbage collection is difficult in many urban areas, such as parts of Mumbai. Source: Shutterstock

In efforts to tackle the problem, there are a growing variety of autonomous robotic thrash collectors in the works. Volvo’s ROAR prototype is exploring how the work can be made more efficient with the use of a drone and robotic collector while, in India, an autonomous robot is being developed that will aim to help the country’s “mammoth task of garbage collection and segregation.”

In addition, the existing poor collection methods in Asia results in recyclable materials such as plastic, glass, paper, and others all being collected mixed together, causing extra costs to separate them and recycle them. It is often just cheaper to dump all of this rather than invest in improving waste collection and separation of materials at the source of collection.

In China and India for example, the problem is so bad that over 90 percent of waste is sent to landfills with, at most, limited attempts to treat or cover the landfills.

To help address this, AI-driven robots can help sift through unsorted thrash, using sensors and computerized systems to detect recyclable items like plastic containers, glass, or aluminum cans that can account for as much as 75-80% of a collected load. These detected recyclables can then be removed via robotic arm in a fully automated process, leaving just 20-25% of unrecyclable waste to be composted or disposed of.

AMP’s Neuron AI platform guides the AMP Cortex robots, using advanced computer vision and machine learning to continuously train itself by processing millions of material images within an ever-expanding neural network that adapts from experience to changes in a facility’s materials processing stream.

“Robots are the future of the recycling industry. Our investment with AMP is vital to our goal of creating the most efficient recycling operation possible, while producing the highest value commodities for resale,” commented John Hansen co-owner of SSR.

Added fellow co-owner of SSR Eric Konik, “AMP’s robots are highly reliable and can consistently pick 70-80 items a minute as needed, twice as fast as humanly possible and with greater accuracy. This will help us lower cost, remove contamination, increase the purity of our commodity bales, divert waste from the landfill, and increase overall recycling rates.”

Trade body Food Industry Asia also found in its study that improving Southeast Asia’s waste collection systems – rather than banning or taxing plastic consumption which had proven to be ineffective in the region – to be the most effective way to prevent plastic waste from leaking into the ocean, a major issue facing ocean conservation in this part of the world.

But what of plastic waste already in the oceans and rivers? There are several autonomous projects already literally in the water, such as WasteShark that collects ocean waste by swimming through the ocean, able to collect up to 200 liters before needing to be emptied. 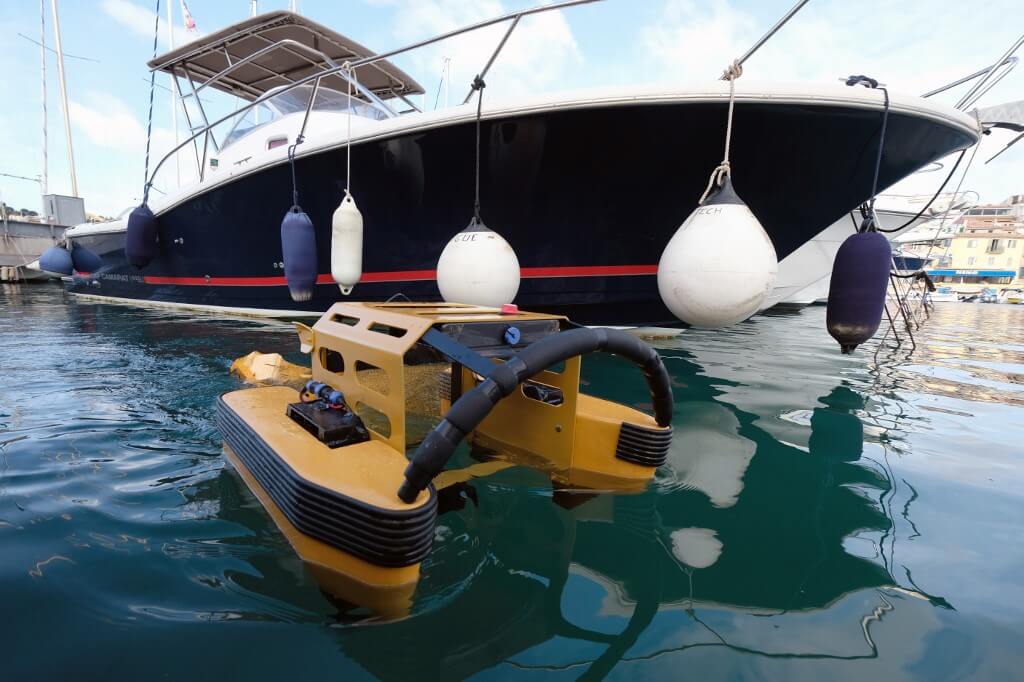 A ‘Jellyfishbot’ collects floating waste in the harbour of Cassis. Source: AFP

Hector The Collector is a remote-controlled bot from the Rozalia Project that uses sonar to map deposits of plastic and other waste deep on the ocean floor, and Hector can dive down to collect this rubbish without impacting the surrounding marine life. 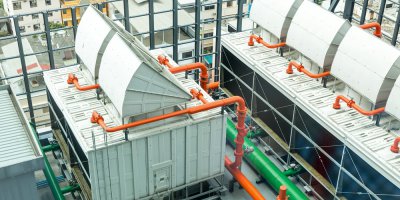 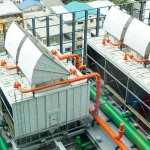 And Dutch NGO The Ocean Cleanup has released a robot that intends to clean up 80% of the world’s rivers within five years. The Ocean Cleanup founder Boyan Slat believes 1,000 rivers worldwide are responsible for some 80% of plastic pouring into oceans, so its robot is a solar-powered device that scoops up waste from river surfaces, positioning the garbage unto conveyor belts and into a bin headed for recycling.

One of its first robots is being used to pluck 30 tons of garbage out of Malaysia’s Klang River, every day.