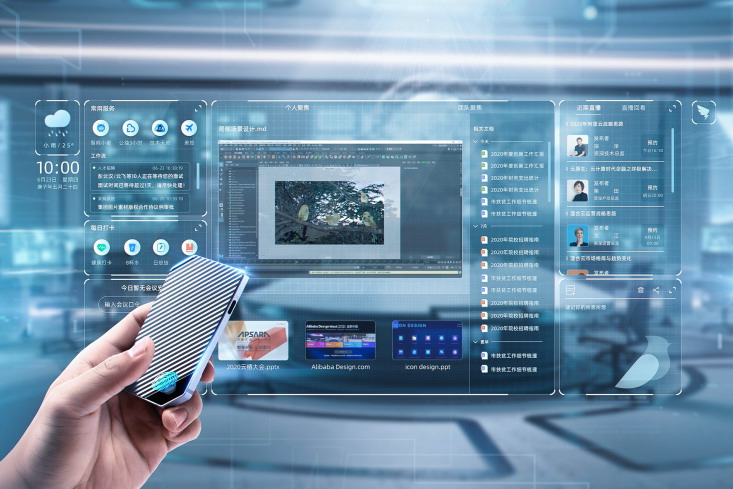 ‘Everyone will have one’ — Alibaba unveils personal cloud computer

The cloud arm of Chinese tech heavyweight Alibaba unveiled new hardware at its biggest technology event of the year, including a personal cloud computer.

The 60-gram, palm-sized Wuying computer is aimed at replacing the need for powerful desktop machines.

Connectable to any computer screen, the device leverages Alibaba’s backend clout to allow users to perform compute-intensive tasks and “more easily enjoy the benefits of cloud computing anytime, anywhere, in a cost-effective yet secure way,” according to Jeff Zhang, president of Alibaba Cloud Intelligence.

Cloud computing was Alibaba’s second-biggest source of revenue last quarter, according to the firm, driven by growth in its public cloud and hybrid cloud businesses.

The tiny cloud-native device could offer greater power than PCs for certain applications. Alibaba says the rendering time for one frame of high-resolution animation on the device is just 10 minutes, which is nine times faster than traditional machines.

“Wuying is not only designed for home – use but can also be used as a replacement for computers across government agencies and enterprises. All you have to do is connect it to a screen, then you can use it to do anything you would use a PC to do,” Alibaba Cloud president Jeff Zhang said during the online event.

Channeling the famous words of Bill Gates, Zhang said that with the evolution of cloud technology, “everyone will have a cloud computer.”

“You can purchase resources anytime you want, scale the computing power as you need, and release the resources whenever you are done with them,” he said. “No more moving information around from one storage media to the next.”

Alibaba’s Wuying (which means “cast no shadow”) differs from Google’s successful cloud-first Chromebook in that it doesn’t require a CPU, and all storage is managed in a data center- like security environment. Users can also buy and access licensed software including Linux, Windows, and various productivity applications.

The firm didn’t announce details on pricing but said the device would be made initially available for enterprise customers before being rolled out to a consumer market.

Alongside the cloud computer, Alibaba’s Damo research and development arm unveiled an autonomous delivery robot. Aimed at China’s last-mile delivery sector, where 200 million packages are delivered daily, the robot can cover a distance of 100km on one charge and carry 50 packages at one time.

This potential can able Cainiao, Alibaba’s logistics division, to deliver up to 500 packages a day within a single community or campus.