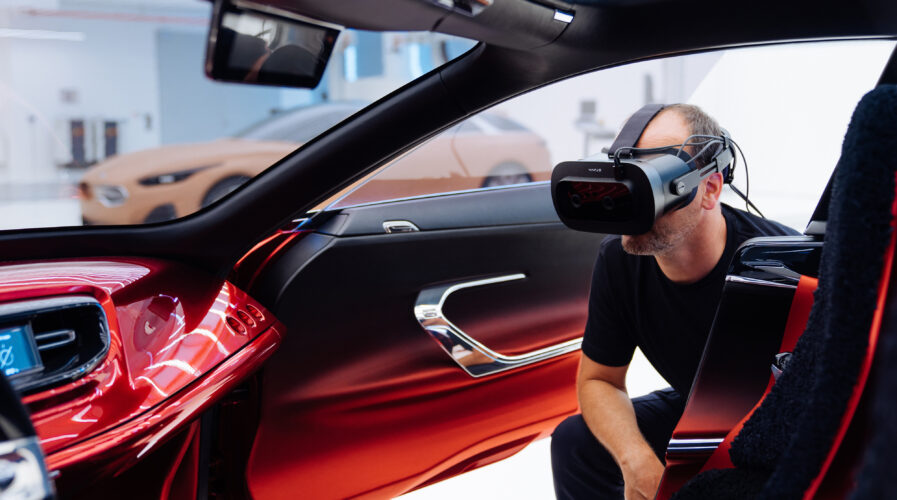 KIA uses Varjo’s VR headset to not only improve its car concepts, but to collaborate with global teams too. Source: Varjo

How KIA Motors is streamlining car design with XR

Unterluggauer is the center’s creative manager of CGI. With recent business travel restrictions, he and his team at KIA Europe have been relying on Varjo’s mixed-reality devices integrated with Autodesk VRED to enable them to work virtually alongside colleagues from the car giant’s studios around the world, while radically redefining the collaborative process of car design.

Using the XR-1 headset made by Finnish firm Varjo, designers can visualize and work on a photorealistic, real-scale virtual car model within a real-world physical space. Using Autodesk VRED’s virtual collaboration feature, designers and stakeholders in other parts of the world can work on the exact same models, with all design updates recorded and reflected accurately in real-time.

At its design center in Europe, the South Korean carmaker creates futuristic concept cars as well as production models for both Europe and the global market. Until recently, the design process had relied on extensive use of 2D review processes, switching to 3D clay models and prototypes when they need to refine and develop surfaces.

However, 2D models lacked volume, and clay models lacked scale, meaning to achieve realistic representations of the automobiles they were working on was a challenge. With XR and VR devices, they’ve been able to create an immersive mixed reality experience instead of just looking at concepts on a screen or a model. Designers are able to discuss, gather feedback, and make design decisions in a virtualized, but physically accurate, collaborative space. They can even compare a virtual model against a physical model in a room, or augment a physical model with virtualized designs.

“Immersive collaboration works way more naturally than we expected,” said Gregory Guillaume, the vice president of design at KIA Motors Europe. “This is something I’ve always wished for and with the Varjo device, it’s now a reality.”

Unterluggauer said the resolutions produced by Varjo’s VR headset were much more vivid than other headsets he had tried. “For the first time, we could literally see the metallic flakes in the paint and perceive the depth and quality of the material shaders. We could see the beauty of the details more than ever before in the virtual world.”

His sentiments echo the thoughts of Varjo CEO Niko Eiden, who recognized that his XR system could help accelerate design processes not just for car manufacturers but for other design-heavy industries like architecture. And while its VR training business is really taking off with partners like Boeing, Eiden saw XR’s real power in design.

“We want to enable these professionals to work inside their designs every day […],” Eiden told TechHQ.

Varjo’s retina-level visuals are what sets it apart from other headset makers, and makes it such a valuable tool for the detail-obsessed design industry. But its power comes from a combination of cutting-edge hardware and software. The Varjo XR-1 is the first mixed reality device supported by Autodesk VRED, an advanced automotive visualization software.

“It’s the perfect fit between two technologies,” said Autodesk VRED product manager, Lukas Fäth. “With VRED’s highest accuracy in design quality and the photorealism of the Varjo XR-1, designers can spot problems and make iterations sooner than ever before.”

The need for collaboration in the design process in spite of the restrictions of remote working has, in many ways, helped streamline and innovate the design process for the Kia Motors team, reducing the need to organize physical meetings in various parts of the world. 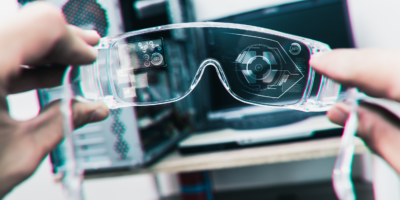 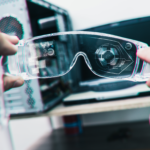 ARE WE ANY CLOSER TO SMART GLASSES IN BUSINESS?

“Before, reviewing a car model with design management meant flying to Korea and took at least four days,” commented Guillaume. “Now, I can do it in one hour.”

And in a ‘New Normal’, where the efficiency of remote collaboration tools like videoconferencing software is stretched and often unreliable, Guillaume says there have not been any reliability issues with Varjo and Autodesk, despite the complexity of the VR/XR hardware and visual rendering software.

“You’d think this is so much more complicated than a video call. But the collaboration has been very reliable,” Guillaume said. “That’s only possible if we trust what we’re seeing and the tools we’re using. It amazes me that something so complicated is working so naturally and easily.”