Workers in Vietnam and SMEs in Indonesia can now look to e-learning platforms to pick up digital skills. Source: AFP

There have been a lot of downsides to 2020, but one of the bright spots was the availability of e-learning platforms and services to stand in for classroom educations for all levels. From young learners to those taking professional certification courses, the vast majority switched to online learning for large parts of this year.

With pandemic-related effects posing an ever-present threat, however, embracing digitalization has become more imperative than ever. While more matured territories might be further along in their digital adoption, countries like Indonesia and Vietnam have just recently announced that small and midsize enterprises (SMEs) and workers affected by COVID-19 will embark on training via e-learning to improve their digital capabilities.

In Indonesia, the Ministry of Communications and Information Technology revealed it’s working with the Indonesian E-commerce Association (IdEA) to kick off online classes for 2,500 SMEs, starting from this month until December 12.

The classes covering a variety of digital skills including digital branding, soft skill development, and business financing will be offered to participating SMEs to help upgrade their skills. Not only will the 60 classes on offer be good to enhance digital inclusion among Indonesian small businesses, but the program will also target SMEs outside of the main urban hubs, including in remote areas and in tourist locations.

“We’ve seen that the successful cases of SME digitalization mostly occur on Java island. So, we want the same success for SMEs all around the nation,” stated Johnny G Plate, Indonesia’s Minister of Communications and Information Technology. “We also want to see those already on the digital platforms upscaling their businesses.”

The minister added that about 9.4 million Indonesian smaller businesses have migrated operations online, which is not too far from the government’s target of having 10 million SMEs go digital by the end of 2020.

Meanwhile, in Vietnam, a series of short training courses is being introduced in eight cities and provinces across the country, with the aim of helping at least 1,000 workers who have been impacted by the pandemic or its consequent effects like downsizing.

A collaboration between the German development agency Deutsche Gesellschaft für Internationale Zusammenarbeit, Vietnam’s General Directorate of Vocational Training, and the local departments of Labour Invalids and Social Affairs, these courses will also run for two months until the end of the year. 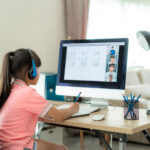 BYTEDANCE IS SHIFTING ITS FOCUS TO THE ONLINE EDUCATION MARKET

Workers heavily affected by the pandemic such as tourism and hospitality can opt for these e-learning programs which will focus on reskilling participants in more sustainable industry fields, including mechanics, industrial electrics and electronics, plumbing, wastewater treatment, and automotive.

Vietnam has been pushing vocational training courses like this for the last few years, but with the amount of unemployed or workers at risk of losing employment due to the pandemic, the training is being made available online.