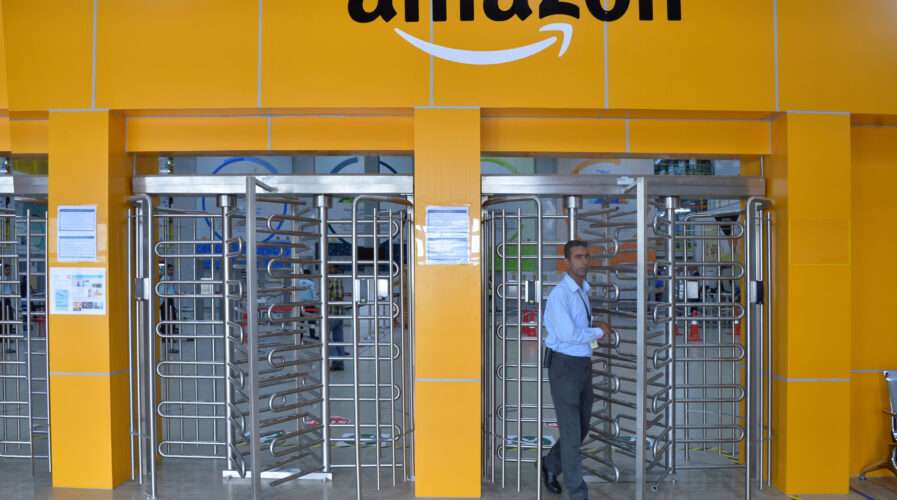 Employee of Amazon India walks out of a security gate at Amazon’s fulfilment center on the outskirts of Bangalore. Source: AFP

For India, the most exciting time of the year is just a month away. Diwali, an event marked all over the world, but especially by the world’s Hindus.

During the festive season sales in the past several years, online shopping sites in India broke records continuously, and this time, e-commerce biggies like Amazon, Flipkart, and Jiomart aren’t holding back.

This is despite the pandemic severely hitting the Indian economy, resulting in large-scale layoffs across several industries.

In fact, the number of online shoppers in India will nearly double to around 50 million during the festive season this year, according to consultancy firm RedSeer.

Amazon’s Great Indian Festival sale will begin from October 17, the e-commerce giant has announced. This is just one day after Flipkart’s Big Billion Days 2020 sale, showing just how serious the US retail giant is about heading off local competitors. The Seattle-based online retailer is now the leader in India with rival Flipkart a close second since Walmart acquired control for US$16 billion two years ago.

To take on home-grown e-tail rivals Flipkart and Jiomart, Amazon will allow its Prime members access to the sale 24 hours earlier, giving them the priority to deals and discounts of the Amazon Great Indian Festival sale a day before other customers. And as rivalry heats up in the Indian e-commerce, a market worth US$27-billion market in 2019, the two giants will clash for the first time with a more recent homegrown competitor, Reliance Industries Ltd.’s JioMart.

While Flipkart is sticking to a six-day event, Amazon plans to keep the discounts going right up to the mid-November Diwali celebration – a move that follows a 60% surge in new merchants on Amazon’s platform, Bloomberg reports.

Amazon has also recently infused fresh capital of US$152 million into one of its India units, Amazon Seller Services, which will provide more ammunition to Amazon to compete aggressively against Flipkart and Jiomart. According to reports, Amazon has invested US$6.5 billion into its India operations and for this year alone, both Amazon and Flipkart have invested in excess of US$1 billion to build up their capabilities, declaring “long-term” bets on the country.

Tapping into the booming e-commerce market

India’s e-commerce is set to achieve a 40% growth in 2020, compared to 23% growth last year, grossing US$38 billion in gross merchandise value, up from US$27 billion in 2019, according to RedSeer Director Mrigank Gutgutia.

Owing largely to digitization caused by the pandemic, the total number of online shoppers is expected to jump from 135 million in 2019 to 160 million by the end of the year.

And as a result of the continued challenge faced by offline retail, RedSeer expects online penetration to jump from 3% in 2019 to 5% in 2020, the highest increase ever recorded for Indian e-commerce in the last decade, driven by the e-grocery category.

Currently, India’s retail market, which is worth US$850 billion according to Bain & Company, is the fourth largest globally – though largely unorganized.

E-tailers like Amazon and Flipkart usually hire thousands of people in temporary delivery and support roles to handle the high volume of orders during the peak sales period.

To meet the demand spike, Amazon created 100,000 seasonal jobs globally and plans to open 10 new fulfillment centers to warehouse products from its 650,000 sellers. In May this year, Amazon had created close to 70,000 seasonal opportunities across its operational network and customer service centers, part of the company’s commitment to creating one million new job opportunities in India by 2025 through continued investments in technology, infrastructure, and its logistics network. Flipkart announced that it would add 70,000 positions, but last year announced the creation of 1.4 million temporary jobs across the supply chain, last-mile connectivity, and customer support in preparation for their festive sales.

Both e-commerce titans have also recruited thousands of local stores to serve customers. For Amazon, more than 20,000 small stores have signed on to its Local Shops program over five months to vend basics like household essentials and fresh flowers. Flipkart, for its part, has enrolled 50,000 retailers to deliver in more than 850 Indian cities while unveiling a wholesale digital marketplace connecting manufacturers with sellers.

Over the last few months this year, Amazon, which has more than 32 million cubic feet of storage capacity and supports more than 6.5 million sellers across the region, has announced plans to launch 10 new warehouses and expand seven existing centers across the country this year.