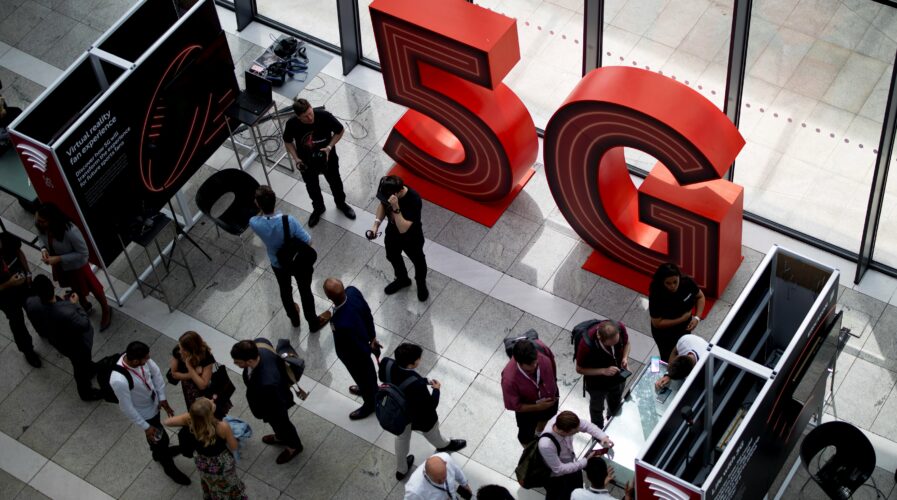 The 5G logo is pictured during the launch of Vodafone UK’s 5G mobile data network in London. Source: AFP

Singapore has been embarking on an all-out push to get itself ready to become a leading digital economy.

Part and parcel to that goal, the city-state has been leading the charge for the next generation of mobile connectivity in the region as its 5G rollout gathers momentum and more enterprises participate in the ecosystem.

Already its cellular infrastructure is competitive. To put things into perspective, Speedtest Global Index, a service that tracks access speeds internationally, ranked its mobile internet speed 12th out of 138 nations. The island’s fixed broadband speed is the fastest among 174 countries while it’s mobile internet speed is ranked 12th out of 138 nations.

Pundits have declared that 5G will revolutionize the digital world and in the ASEAN region, Singapore is expected to lead the way in launching 5G in 2020, followed by Vietnam, the Philippines, Malaysia, and Thailand.

Singapore’s Minister for Communications and Information S. Iswaran said the city-state has committed to invest substantially in 5G because of the exciting opportunities it will bring businesses, workers, and individuals, and despite the current economic uncertainties posed by the pandemic, the island remains on track to roll out nationwide 5G services by 2025.

Currently, three incumbent network operators – Singtel, StarHub, and M1 – have all began 5G trials with industry partners, including a 5G pilot network in the one-north district, by Singtel and Ericsson. Singtel chose Ericsson while a group that includes StarHub Ltd. opted for Nokia after the city-state gave final approval for the rollout of nationwide 5G coverage in the country Wednesday.

Singapore’s fourth telco operator TPG, which submitted a separate bid, was the only major player left out of the nationwide 5G deployment.

The licenses granted to the telcos is for 15 years, according to Iswaran.

The race of 5G

5G networks offer significantly greater transmission capacity. 2G brought us SMS and picture messaging, 3G was all about mobile internet while 4G made streaming and sharing part of everyday life.

Reports stated that advanced 5G technologies promise surfing speeds 20 times faster than what 4G networks offer and the ability to connect 1,000 times as many devices, on top being able to better support mission-critical applications, such as driverless car navigation and remote surgery requiring a constant connection without lag.

The GSMA forecasts that Asian mobile operators will invest more than US$570 billion between 2018-2025, with US$370 billion being spent on 5G deployments.

Several industry reports also concluded that Singapore is the best location of all Southeast Asian countries to capitalize on the new revenue opportunities generated by 5G mobile technology.

The revenue of Singapore telcos could increase by up to US$510 million (SGD704 million) by 2025 as a result, according to a report by multinational technology company Cisco and consulting firm A.T. Kearney state that.

Additionally, consumer 5G mobile subscriptions are expected to make up to US$240 million, while business-to-business or enterprise users could add another US$220 million with 5G aiding the adoption of emerging technologies such as artificial intelligence (AI), robotics, and the Internet of Things (IoT).

The remaining US$50 million is expected from firms that use the enhanced 5G connectivity to provide services to other businesses or consumers.

Though the standalone networks are more efficient compared to many of the initial 5G networks that are being rolled out, they are also very expensive to build. Many of the current 5G networks are built by upgrading existing 4G infrastructure.

Despite facing a recession this year due to the Covid-19 crisis, Singapore’s Communications and Information Minister said that the cumulative investments will run into billions of dollars.

IMDA had also said telcos would have to pay more than SGD55 million for one lot of the scarce 5G airwaves and the telcos would also have to build other 5G-related infrastructure including base stations to provide islandwide coverage.

What good is a digital transformation without talent?

Technology is relatively easy to come by when it comes to translating technological innovations into real business results; it is talent that is often the limiting factor.

Singapore’s government has also emphasised that a part of the first wave of 5G opportunities is in the creation of jobs to support the network infrastructure.

The island will also begin training existing telecoms professionals at the end of this year, with plans to train 5,000 5G professionals over the next three years.

Through the TechSkills Accelerator program, IMDA has also set up 5G workforce transformation committee with each of the four mobile network operators to oversee the matching of talent with opportunities.

IMDA will also be appointing a consortium, comprising the National University of Singapore and Singapore Polytechnic, as the 5G and Telecoms Programme Manager, which will coordinate programs to develop skills across the country’s 5G ecosystem.

The government is expecting the demand for 5G professionals to continue to grow as the 5G rollout gathers momentum and more enterprises participate in the ecosystem.