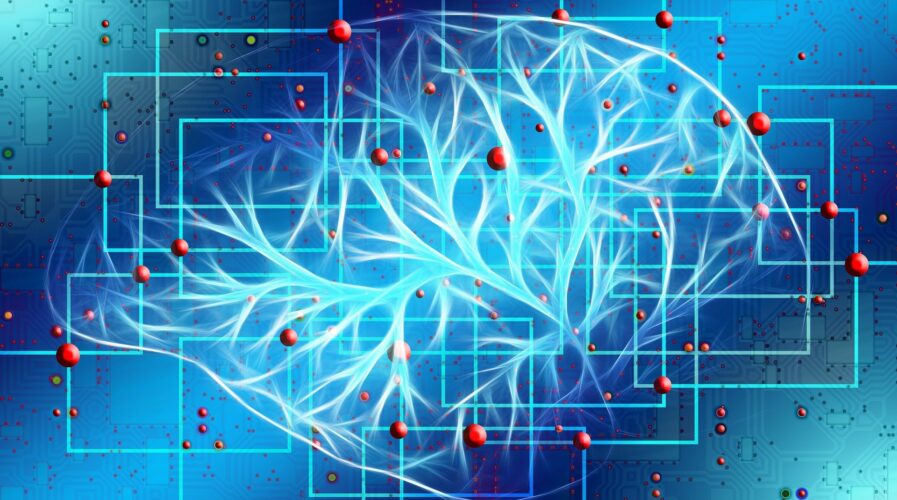 Insilico Medicine recently raised US$255 million and is disrupting the pharma industry with its novel use of deep learning and AI.

The use of emerging technologies in the biotech market is growing, with a market valuation of US$752 billion in 2020 alone. This is especially true in the Asia Pacific (APAC) region, whose biotech market is expected to expand even faster, with a CAGR of 16.8% up to 2028.

This speed can be attributed to improvements in healthcare infrastructure, supportive government policies, clinical trial services, and epidemiological factors.

In the US, over 78% of the healthcare sector intend to or are already implementing digitalization efforts using cloud and other emerging technologies.

There is also growing interest by foreign companies to work or collaborate closely with regional APAC biotechnology players, making the region’s biotech market ripe for investment.

Insilico and its value proposition

Yesterday, Hong Kong-based AI-powered biotech startup Insilico Medicine raised another US$255 million, led by Warburg Pincus and over 25 expert biotechnology, pharmaceutical, and AI investors. These include Sequoia Capital, Lilly Asia Ventures, and Baidu Ventures. Since its inception in 2014, this brings their total investments up to US$310 million.

Insilico’s innovative and unique services revolve around the heavy use of deep learning to drive their efforts in drug discovery and development. Deep learning (DL) is a subset of machine learning (ML) under the umbrella of artificial intelligence (AI).

Insilico and technological disruption of the pharmaceutical industry

Traditional drug development from discovery to market exists on a continuum, divided amongst three to four stages, depending on the manufacturer.

It takes approximately 10 to 12 years to achieve that, with most of the time spent on clinical trials. Complicating that, only about 14% of drugs manage to get regulatory approval (such as from the Food & Drugs Administration, or, FDA), with costs averaging US$2.8 billion.

As such, speed is the biggest challenge for pharmaceutical companies, and also why novel drugs cost so much while their patents are active.

Before drugs can reach the clinical stage, it has to undergo several rigorous steps to demonstrate its strong efficacy and safety for clinical trial organisms, be it animals or humans.

Typical development processes up to the nomination of a preclinical candidate can take approximately four and a half years or about 53 months.

With Insilico’s method, it can shorten the process by as much as 66% (which is 18 months, or, one and a half years). Not only that, but it can also drastically reduce associated costs by 90% as compared to similar programs. 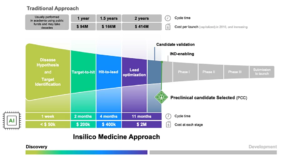 The novel system by Insilico will save up to 66% of preclinical process time. Image by Insilico.com

Insilico has built a strong, AI-powered, end-to-end drug discovery platform, which, according to their CEO, Dr. Alex Zhavoronkov, has taken them seven years to develop.

The platform includes PandaOmics™, an AI-powered novel target discovery engine; Chemistry42™, a deep generative reinforcement learning system (which allows for de-novo design of novel molecules with the desired properties that do not exist in the known chemical space), and InClinico™, which predicts clinical trial outcomes.

PandaOmics is a biology-solving engine, whereas Chemistry42 is a compound-generating engine. Both these engines have been built on years of modeling large biological, chemical, and textual datasets using deep learning.

Insilico is the world’s first company that has managed to use AI to identify a novel target for a major pulmonary disease. How it works is that the algorithm generates novel molecules for that novel target.

The novel target generated by PandaOmics presents a significant breakthrough and is relevant for a broad range of fibrosis indications. Chemistry42 then uses the newly discovered target as the basis for the structure-based design of a first-in-class novel small molecule inhibitor. This then completes the preclinical experiments required to nominate a preclinical candidate.

Next steps for Insilico

Since the launch of Chemistry42 in September 2020, seven out of the top 30 pharmaceutical companies have deployed its software, including Merck KGaA and UCB.

“Over the last two years, we have built an AI-friendly drug discovery team and a “frictionless drug discovery” ecosystem of about 80 contract research organizations and partners like the cloud robotics provider Arctoris, that specialize in specific assays, to generate disease-relevant machine-learnable proprietary data and to develop our own drug discovery pipeline”,

He also stated that the company is preparing to innovate clinical development (which takes around seven or more years) using a similar approach.

“Artificial Intelligence and Machine Learning is a powerful tool to revolutionize the drug discovery process and bring life-changing therapies to patients faster than ever before.”

In the meantime, Insilico is ready to license its AI platform to pharmaceutical and biotech companies for on-premise deployment or via SaaS to expand their own AI-drug discovery processes.