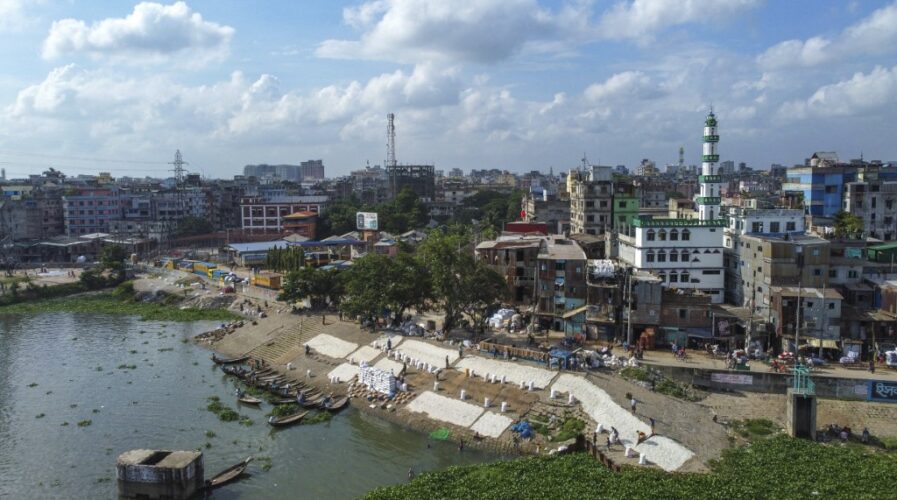 With input from Japan, Bangladesh might have its own Dhaka smart city soon. (Photo by MUNIR UZ ZAMAN / AFP)

Smart City development has long been a priority for many nations – and Bangladesh may soon join their ranks.

According to Naoki, Japan has contributed in many areas including infrastructure development in Bangladesh. There are currently over 300 Japanese companies operating in the country – triple the number 10 years ago.

Japan is the largest Asian export market for Bangladesh with shipments amounting to about $1.3 billion. As such, Japanese companies are ready to expand their business there, in spite of challenges brought on by the Covid-19 pandemic.

Naoki emphasized the importance of collaboration to further expand cooperation between the two countries through the development of strategic partnerships between Japan and Bangladesh.

“ICT is now the main driving force of the economy. The Japan International Co-operative Agency (JICA) can further develop and enrich the master plan for Bangladesh 2041 by assisting in technology-based human resource development.”, he added.

Palak presented some proposals to the ambassador for collaboration to boost the country’s IT sector. Some areas Bangladesh is exploring include cybersecurity, e-Waste management, and e-Governance.

“We have already sent a proposal to ERD to set up a Bangladesh-Japan ICT University to meet the requirements for performing Industrial Revolution 4.0 and Society 5.0,” added Palak.

Last year, Nikkei Asia reported that Japan has set aside a 250 billion yen (US$ 2.4 billion) fund to support Smart City projects by Japanese companies and improve decarbonization measures in 26 cities across ASEAN.

Tokyo expected these 26 cities to present their Smart City development plans at the end of last year, with eligible projects to be picked by March this year. It also expects Japanese companies to have basic plans for these cities with feasibility studies conducted. However, at the time of writing, its progress is still unclear.

JOIN will consider forming joint ventures (JV) with local and Japanese companies in ASEAN, whereas JBIC will extend the credit line to environmental programs. The latter include initiatives for reducing greenhouse gas emissions, increasing the use of renewable energy, and preventing air and water pollution.

Japanese companies in ASEAN include Tokyu in the Bin Duongh Province in Vietnam, whereas a consortium of Yokohama-based companies is involved in a project in the Thai province of Chonburi. Trading houses Sojitz and Mitsubishi are separately promoting the development of smart cities near Jakarta.

This move puts it in competition with other countries from Greater Asia – namely, China and South Korea, as well as other foreign rivals.

The South Korean government is also preparing a fund of 400 billion won (US$ 366 million) to help its own companies acquire smart-city projects.

While projects in Kota Kinabalu, Malaysia, and the Laotian capital of Vientiane are eligible for South Korean support, the cities are also among those where Japanese companies are aiming to expand their business.