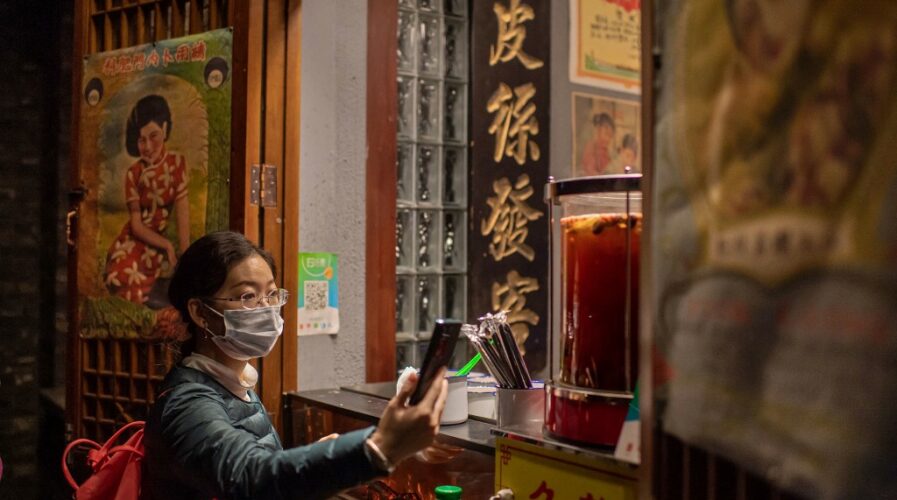 As consumers increasingly prefer digital payments, central banks are looking into CBDCs to keep up with digitalization trends. (Photo by NICOLAS ASFOURI / AFP)

A recent report released by the Bank for International Settlements (BIS) re-asserted their position that central bank digital currencies (CBDCs) can be a good supplement to a competitive monetary system and explored CBDC designs that nations can consider adopting.

Monetary systems are fundamentally built on trust in the currency. As such, it opined that CBDCs can open a new monetary channel based on trust in central banks.

Given how the world is rapidly digitalizing with rising consumer trends towards digital forms of payments, a digital representation of money such as CBDCs can “better capture public interest”.

“… digital innovation implies a “triple imperative” for the central bank in its role at the foundation of the monetary system: competition, data privacy and the integrity of the payment system,” said Hyun Song Shin, Economic Adviser and Head of Research of the BIS, in a speech at their recent Annual General Meeting in Basel.

It recommended that CBDCs function as part of a “two-tier system” where the central bank collaborates with the private sector, with each playing to its own strengths. The central bank will operate the “core of the (CBDC) system”, and ensure its safety and efficiency, whilst private sector players such as banks and other payment service providers bear the brunt of customer-facing activities. In Asia, several countries have or are considering developing CBDCs, including China, Japan, Malaysia, and Cambodia.

CBDCs should be designed around digital identity

Reinforcing its disdain for decentralized cryptocurrencies, BIS pushed for CBDC designs to be built around digital identity with a focus on data security and privacy. A trusted digital identity approach can stave off illicit activity, while at the same time, protect data privacy and facilitate cross-border payments.

“Central bank digital currencies are moving from concept to practical design and renew the institution of money in a new form designed for the digital age,” writes the Bank for International Settlements in its Annual Economic Report 2021.

The report covered several design options for CBDCs and included an economic analysis of its implications for financial institutions, central banks, and customers.

As central banks are trusted and function as overseers of each nation’s monetary system, CBDCs will merely have to piggyback on their status to ensure the finality and certainty of payments made in transactions.

Central banks ensure adequate liquidity in payment systems to function and are able to level the playing field; as such, CBDCs can be “made available on an equal basis to all parties”.

BIS, in its analyses, suggests that the most viable and practical design for CBDCs would entail one that is tied to digital identity.

This means that users would have to identify themselves to use this currency system, which reduces the option for using a decentralized identity approach such as blockchain.

They did, however, talk about possible designs that borrow from distributed ledger technology (DLT) in the form of “permissioned DLTs”.

However, this is still an ongoing area of research that is assessing the merits of such a design.

BIS noted the importance of data security and protection of customers’ data, and frequently emphasized their necessity in CBDC designs. Exploring various digital identity (DI) management approaches, BIS referenced DIs from Big Tech such as Facebook and Huawei. Such players often build private DI ecosystems within their products and services, which can also be used across other services with facilities such as single-sign-on (SSOs). They also mentioned harmonized DIs that work across consortiums of private firms (e.g. multiple banks) but highlighted how this approach would lead to silos and limited interoperability with other services. And there’s also a hybrid approach where private and governmental operators could harmonize and provide interoperability for DIs such as those seen in Estonia and Singapore.

The Singapore government utilizes a biometric digital national identity system for citizens called SingPass, which is required to access government services, but which can also be used to access services by certain private players. As BIS condones CBDCs, they emphasized how CBDCs should also come with a high standard of cybersecurity, especially since the pandemic has led to a rise in cybercriminal activity and attacks. Incidents such as data breaches and coordinated or state-backed cyberattacks further reinforce the critical need for higher security as CBDCs will similarly face cyber threats.

BIS concluded that CBDC designs ought to be careful to protect users against personal data abuse whilst at the same time protecting the sovereign payment system against money laundering and financial crime.

In addition, the BIS says international cooperation on design will be vital if central banks are to harness the full benefits of CBDCs and to improve cross-border payments while countering foreign currency substitution. Cross-border trade is big in Southeast Asia (SEA), and the rise of digitalization and consumers hungry for e-commerce will further spur more cross-border trade.

Recently, China’s JD.com launched the first ‘In-ASEAN’ cross-border trade with Thailand, and Malaysia and Thailand also launched a cross-border QR code payment system. These suggest that the necessity for an interoperable payment system is all the more important, especially in this region.

A key challenge highlighted by BIS is the lack of interoperability of DIs across countries. Some countries may be hesitant to provide DI information to other countries that do not have similarly stringent or different data protection regulations.

As such, it recommends that countries collaborate to develop a mutually recognizable system for DI credentials. This can be grounded on fostering KYC (know-your-customer)  and cross-border information sharing; reviewing interaction between data frameworks and cross-border payments, and “factoring an international dimension into CBDC design.”

BIS asserts that such cooperative efforts can lead to robust payment arrangements. It highlighted the multi-CBDC (mCBDC) approach that links CBDCs so they interoperate across borders. This can be done by coordinating national CBDC designs with “consistent access frameworks and interlinkages to make cross-currency and cross-border payments more efficient”.