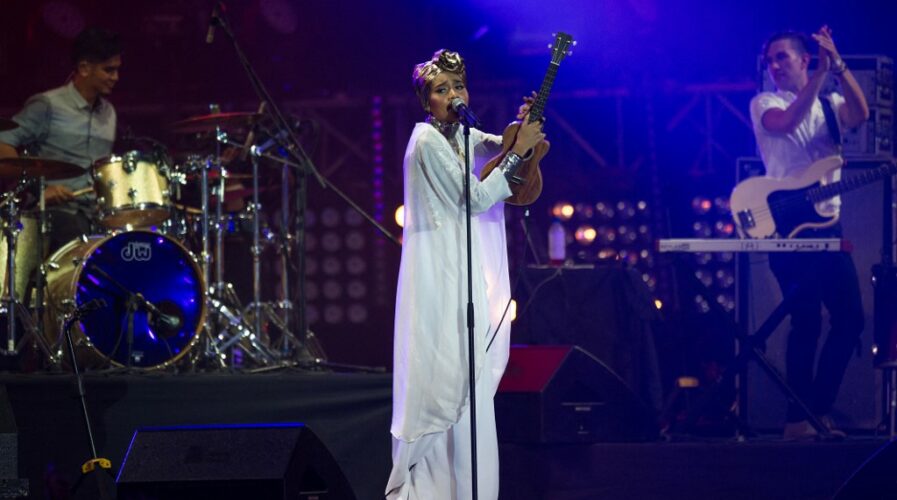 Blockchain could turn the tide for the media and entertainment industry and benefit content creators. (Pictured: Yuna performing on stage at the MTV World Stage Live in Malaysia 2014)(Photo by MOHD RASFAN / AFP)

Can blockchain help solve the woes of the media and entertainment industry?

Media and entertainment isn’t quite the industry we think of when it comes to blockchain. Often misunderstood and mistakenly used interchangeably, blockchain has gained both popularity and notoriety due to its association with the ever-controversial bitcoin.

The lowdown on Blockchain

There are multitudes of practical applications for blockchain technology due to its security and transparency – cryptocurrency is just one of them.

A blockchain is a highly secure, decentralized database system that stores records of data in a cryptographic format. Unlike normal databases, blockchain data created by users (transactions) are not stored in a central location (like a data server). Instead, they are stored on the machines or systems of the people who create the data, across a network. As creators store that data themselves, they ‘own’ their data, thus the system is considered ‘decentralized’.

Normal data stored on data servers risk being accessed and/or manipulated by the data server owner, or may even be lost due to accidents; also, it may be difficult to have a record of these events. However, with blockchain, every transaction created and recorded is permanent and secured with a cryptographic ‘lock’, and the transaction is broadcasted to everyone who owns copies of the blockchain. It is immensely difficult to hack into it to change transaction details, hence why blockchain is transparent and trustworthy.

As blockchain cannot be tampered with, is fully owned by the data creator, and stored across many machines, it won’t face the same security risks that normal data does.

Media and entertainment challenges for creators

Currently, the global media and entertainment industry faces several challenges that blockchain’s secure and transparent nature can help to solve.


How blockchain can help

Overall, blockchain technology allows content creators and media companies access to more just and equitable revenue arrangements by shifting the market power to them instead of intermediaries.

In addition, it can also help to stem the spread of fake news and allow consumers to take back control of their data while innovating the advertising and marketing industry.

Globally, the blockchain market is estimated to reach US$ 23B by 2023, with a CAGR of 81%. Aside from cryptocurrency, blockchain has multiple applications across a variety of industries, thus making it an attractive choice for companies to adopt its use. As with other digital market growth forecasts, the APAC region is projected to grow the fastest.

Aside from other countries, authorities in Southeast Asia (SEA) have been rather receptive to exploring, improving, and implementing blockchain regulatory frameworks. A well-regulated blockchain ecosystem will make it easier and attractive for companies to set their systems up in the region.