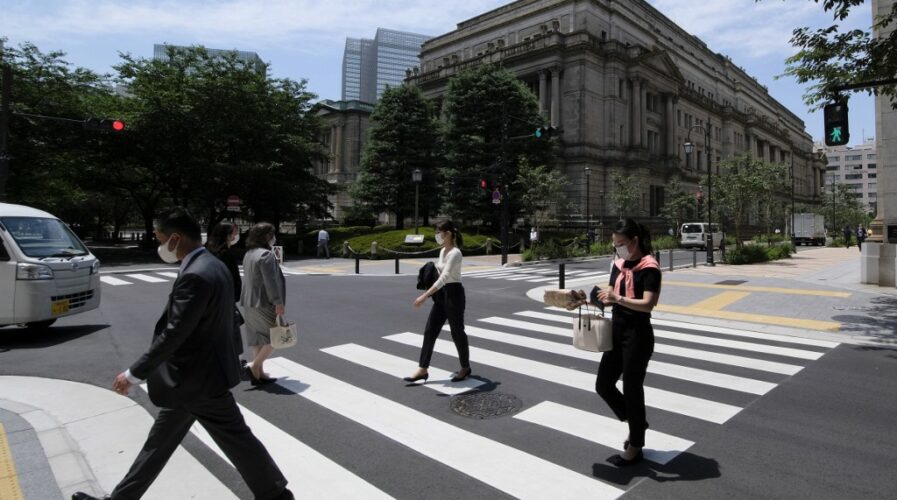 Pedestrians cross the street in front of the Bank of Japan HQ in Tokyo. The BOJ is considering issuing their own CBDC to keep up with digitalization across the region. (Photo by Kazuhiro NOGI / AFP)

A lawmaker overseeing Japan’s CBDC project has said that the country can have additional clarity on what their digital yen would be like late next year, reported Reuters.

Earlier in April this year, the Bank of Japan (BOJ) launched the first phase of its central bank digital currency (CBDC) experiment, with plans to launch the second phase next year. The BOJ is among a group of seven major central banks jointly looking into core features of CBDCs.

The second phase will further clarify some key functions of a digital yen, including which entities will serve as intermediaries between the BOJ and deposit holders.

Japan is joining the ranks of other Asian countries that have studied or are near the launch of their own sovereign digital currencies, including China, Malaysia, and Cambodia. This trend is in line with the rapid pace of digitalization that’s taking the world by storm.

“By around the end of next year, we’ll have a clearer view of what Japan’s CBDC would look like,” Hideki Murai, who heads the ruling Liberal Democratic Party’s panel on digital currencies, told Reuters in an interview on Friday.

However, Japan has not made any decision right now on whether the CBDC will be issued or not. The nation is still researching details of its design and how its issuance will affect financial institutions, according to Murai.

CBDC from Japan not confirmed

Japan’s progress towards experimenting with its sovereign digital currency will be putting quite a number of players in the finance ecosystem on their toes, and ramp up the discomfort traditional lenders will have against digital players.

Similar to other countries, Japan’s traditional banking and finance sector is seeing an upheaval from digitalization, as well as changing consumer demands for financial services. Fintech companies, some independent and many backed by consortiums, usually tech giants, are increasingly entering the lucrative financial space.

Earlier, the BOJ argued that a digital yen will “not crowd out or meddle in private businesses”. If the CBDC is designed in a way that puts commercial banks as intermediaries, it could reduce business from alternative digital financial providers.

“If a digital yuan becomes so convenient it’s frequently used by tourists or becomes a main settlement means for trade, the relationship between the yen and yuan could change” and erode the yen’s status as a safe-haven currency, Murai said.

Murai added that the BOJ has to ensure that their CBDC is compatible with designs by other nations, in part to counter China’s advanced progress towards their Digital Yuan.

This sentiment commensurates with recent research by the Bank of International Settlements (BIS), which highlighted the importance of international cooperation on designs.

Such cooperation will be vital if central banks are to harness the full benefits of CBDCs, especially as it will be able to improve cross-border payments while countering foreign currency substitution, said BIS.

In essence, the report suggested that CBDC designs be centered around digital identity (DI) and privacy and security.

However, a key challenge highlighted was a lack of interoperability of digital identities (DI) across countries. Some countries may be hesitant to provide DI information to other countries that do not have similarly stringent or different data protection regulations.

Nevertheless, we will have to wait till late 2022 to see how Japan’s aspirations towards a CBDC will pan out adequately, and how CBDCs in nearby regions will be able to complement each other.