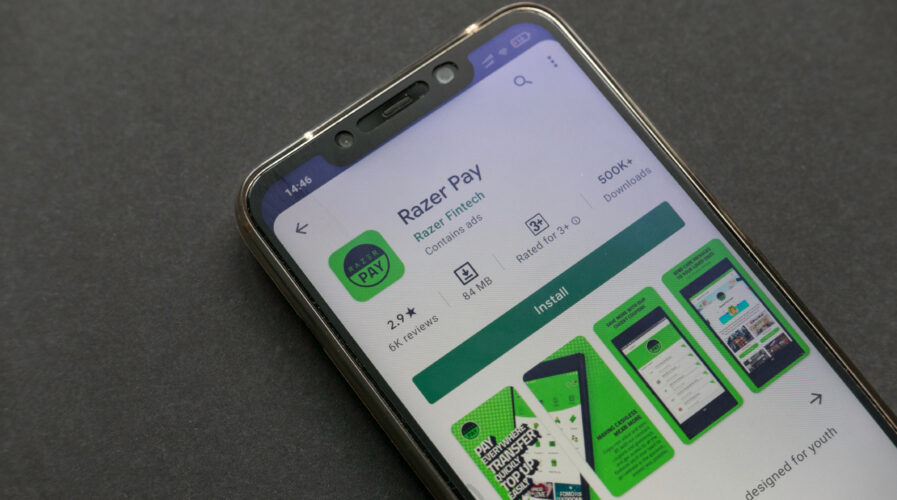 The Razer Pay app on an android smartphone, which will cease to be in service by Oct 1, 2021 (IMG/ Faizal Ramli / Shutterstock.com)

The death of Razer Pay: Did it fail to slice through the competition?

After a three-year “beta” testing period, global gaming peripherals maker Razer has announced the cessation of its e-wallet, Razer Pay. The e-wallet, which was launched in Malaysia in 2018, will end on September 30th in both the Singapore and Malaysia markets it operates in.

According to the website, Razer Pay is an e-wallet app designed for youth and millennials to go cashless and pay for “most well-used retail and services in the [SEA] region”. The app will no longer be available from October 1st, 2021.

Customers with credit balances or gift codes may continue to use or withdraw them up until August 31st. As of writing, all new registrations, top-ups, and peer-to-peer (P2P) transfers cannot be carried out anymore.

One could say that the SEA region is rather congested with fintech services. In the Asia Pacific alone, almost half of consumers prefer digital payments. Not only has consumer preference for such payments increased over the past few years, but noteworthy surges could also be seen in pandemic times.

Countries with a large number of unbanked consumers such as the Philippines and Indonesia have particularly experienced exponential uptakes of fintech apps and products such as digital banking services and e-wallets. Enterprise-wise, many micro and small, and medium enterprises (MSME/SME) have been flocking to digital banks to secure funds as well.

The Malaysian and Singaporean fintech markets, whilst not entirely as mature as their counterparts in greater Asia, are still relatively ahead of their regional peers. In Malaysia for example, digital payments are quickly becoming the norm, coming second only to cash — the latter of which will likely not be king for long.

If there’s anything China’s e-wallet history can teach us, it is that — may the best player win. For e-wallet providers to not just survive but excel, the competition has to be kept small, and consumers have to become highly reliant on their e-wallets. There can be no compromise.

For years now, hardly anything is paid in China with cash or card. Instead, almost everyone in cities is massively reliant on e-wallets. And this is how the two biggest players; Ant Financial’s Alipay, and Tencent’s WeChatPay, are the reigning champions in the digital payment space in China.

Within the Malaysian and Singaporean e-wallet spaces, multiple contenders closely vied for market share over the past few years.

In Malaysia, there are early entrants such as Fave, Boost, and Grabpay. Soon, more joined the motley crew, including Touch ‘N Go (TNG), Maybank’s MAE, as well as China’s stalwarts Alipay and WeChatPay.

It’s worth noting that Razer Pay was launched by Razer and its Malaysian real estate conglomerate partner Berjaya Corporation Berhad. However, a year later, the Berjaya-linked telco UMobile launched its own “multi-function” e-wallet, GoPayz. But whether that was impactful or not is anyone’s guess, although the lack of traction and news about said wallet might say something.

In Singapore, the same brands (even from China), aside from TNG, sought to establish their presence, which did not go unnoticed by local banks. DBS Bank launched its highly popular PayLah; UOB its UOB Mighty, and OCBC has its Pay Anyone (all of which are comparable to Maybank’s MAE).

And to complicate all that, there are your e-Commerce giants such as Shopee, Lazada, and the newest, possibly most threatening fintech player GoTo (i.e. the Gojek and Tokopedia union) that are trying to get their own customers hooked onto their own internal funding ecosystem (aka e-wallets) to pay for their online shopping.

As it is, the early history of the e-wallet battles was waged on nigh uncovered grounds. Early movers such as Boost and Fave appeared to struggle to attract customers, much more retain their loyalty, especially since these startups did not have pockets as large as say, TNG’s (which is 49% owned by Alibaba-linked Ant Financial).

As other players entered, the scene (de)volved into a delightful, albeit short-lived carrot-dangling fest of rebates, discounts, and other goodies that customers could enjoy — at least, in Malaysia.

It seems like three years later, the e-wallet battle fatigue has set in, as leading providers like Grabpay and TNG started conservatively holding back on the goodies. Of course, this was once they’d managed to secure and retain large enough numbers of customers — and more importantly, their data.

Fast forward to 2021, we have central banks in the region working on their own sovereign currencies (CBDCs), with more forward-looking nations looking to facilitate cross-border exchanges.

And then there’s your BNPL players (buy now pay later) too, tapping into the regional consumer debt markets.

In as little as a few years, we have seen all these coming together — deep pockets for marketing; domination of market share; possession of massive amounts of customer data, and increasingly prominent brand presences shaping the scene into something a little more coherent.

Could it be that the stiff competition Razer Pay faced gave it a, shall we say… razer thin margin of success?

After all, with intense competition from fellow e-wallet players, as well as pressure from other fintech players, it would be wise for e-wallet services that can’t do well to drop out of the competition entirely and focus on strengthening their existing portfolios. Alternatively, they could explore closing other fintech gaps to better serve the unique SEA consumer market.

Nevertheless, a source from inside Razer who declined to be named mentioned that “Other [offline] e-wallets services via Razer Merchant Services [RMS] will continue to operate as usual.”

Razer Merchant Services is a B2B provider of solutions ranging from e-Commerce, offline payment solutions, to even logistics. Meanwhile, Razer’s revenues continue to grow, whilst their team teases audiences with previews of their upcoming product, Razer Zephyr — a wearable air purifier… mask… thing.

Clearly, within the next five years, SEA consumers are going to be incredibly spoilt for choice when it comes to not just e-wallets, but for a digital payments service.

Whilst the e-wallet scene could be described as grossly saturated, there is always room for innovation.

And the new window of opportunity?

And on that front, could UMobile’s 2019-launched GoPayz be the dark horse?

Well, that’s a game I’ll be happy to watch.

Update: Razer has reached out for clarification.

According to Li Meng Lee, CEO of Razer Fintech, “The Razer Pay e-wallet app was conceived as a testbed for Razer Fintech to better understand the e-wallet and scheme card ecosystem in Singapore and Malaysia. The app contributed a very small amount to Razer Fintech’s overall performance, with over 95% of our TPV driven by Razer Merchant Services (RMS). As part of the strategy to drive Razer Fintech’s hypergrowth ambitions in its next stage of development, Razer Fintech will sharpen its focus on RMS to position itself as a forward-thinking, merchant-focused B2B payment, solution provider.”

According to a statement, Razer Merchant Services in H1 FY 2021, expected to grow their TPV at a double-digit percentage year-on-year, driven mainly by e-commerce marketplace purchases, food deliveries, and e-wallet top-ups.  RMS has also seen a continued strong uptick in adoption from merchants with an 89% growth year-on-year coming from the Retail, F&B, and professional services industries.

Some key licenses and network expansion include the direct acquiring license from Visa and Mastercard to commence direct card processing in Malaysia before expanding into Singapore and the Philippines. In Singapore, Razer Fintech has been granted a Major Payment Institution license from the Monetary Authority of Singapore (MAS) for domestic and cross-border money transfer and merchant acquisition services.

In Taiwan, Razer Fintech has been approved by the Financial Supervisory Commission (FSC) as an overseas payment provider for cross-border payments through a partnership with E.Sun Commercial Bank.