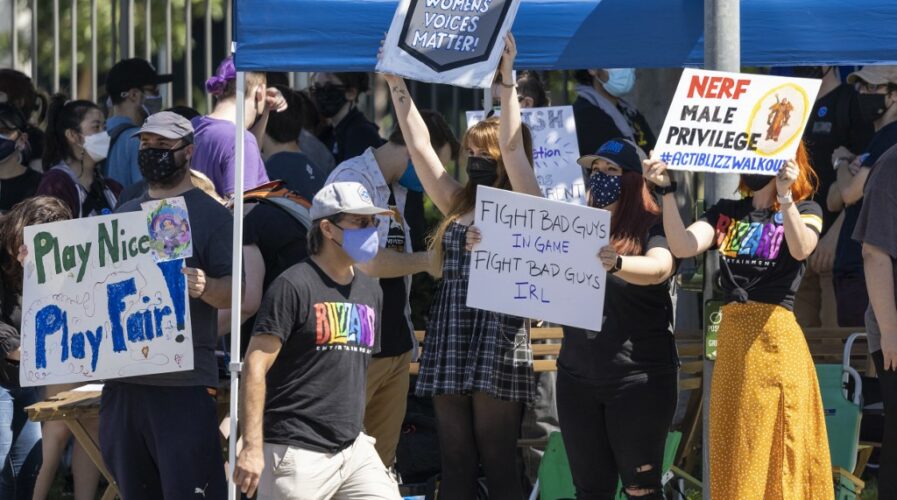 Employees of the video game company, Activision Blizzard, hold a walkout and protest rally to denounce the company’s response to a California Department of Fair Employment and Housing lawsuit and to call for changes in conditions for women and other marginalized groups, in , in Irvine, California, on July 28, 2021.  (Photo by DAVID MCNEW / AFP)

Last week, an unidentified woman employee from Alibaba made allegations of workplace harassment, specifically, sexual assault,  against her manager and a client during a work trip to the city of Jinan in Shandong province, according to AFP. The Chinese e-commerce giant said that it was cooperating with a police investigation, and also had suspended “relevant parties suspected of violating our policies and values,” asserting that it had a “zero-tolerance policy against sexual misconduct.”

On the other side of the world, famous game developer giant Activision Blizzard was recently sued by the state of California’s Department of Fair Employment and Housing. This was on behalf of the large numbers of women staff who have endured years of humiliation, sexual harassment, and even physical abuse at the hands of men in the organization.

This resulted in a mass walkout by protesting staff, class-action lawsuits by investors, and a number of top executives resigning from their positions. Needless to say, their reputation suffered greatly from the social media backlash, and their stock has been falling since.

According to the organization Women Who Tech, a worrying 44% of women founders continue to be harassed, with 41% experiencing sexual harassment. This, and other figures, were derived from a 2020 global survey on the experiences of people in tech.

Of the women working in tech who were sexually harassed:


These women aren’t reporting the harassment they’ve experienced to senior leadership in 2020 as much as they did in 2017. Compared to 50% of men in tech, a majority (67%) of women in tech lack trust in how their companies would handle allegations of harassment.

Can we stop harassing and abusing workers?

These grim statistics reflect the goings-on that we see in the news today — the same narratives were used by Activision-Blizzard women employees who were at the hands of their abusive co-workers, with little room and opportunity for recourse as the rot goes all the way to the top.

And, similar to other instances of sexual assault and harassment in the world, victims are afraid to speak out for fear of it affecting their lives — and in this case, jobs and businesses.

“That fear of retaliation, of it impacting your business in some way, is so, so real. We have a financial responsibility to do what’s best for our business, and if speaking out is going to harm our business, is that OK?”, said Susan Ho cofounder of travel startup Journy, who spoke about abuse by investor Justin Caldbeck.

Unfortunately, the state of rampant misogyny, sexism, harassment, and gender inequity carried out in the tech world against women is but a microcosm of the way women are generally treated elsewhere in society.

This is especially so when there is an imbalance of power between the perpetrators and women victims, where the latter is often in subordinate positions relative to their harassers.

Workplace harassment is not new, nor news

This toxicity and abuse are not new — it is systemic and enabled by people in power and with money, buoyed by prevailing gender-imbalanced social norms, regardless of where it is in the world.

Professor Jennifer Jordan from the IMD business school opines in an op-ed that “ power leads people to feel more invincible, take greater risks (or not even see the inherent risks), not take others’ perspectives, and objectify them.”

Interestingly, this phenomenon that was observed in her study applied to all genders — except that most of those in positions of power, are men. Harassment and abuse don’t just affect women — men are also victims in the workplace.

Take Singapore for example — a highly-developed nation with seemingly progressive legislation and values. In spite of that, a whopping 70% of workers (both women and men polled) did not report harassment in the workplace, according to a report by Ipsos, commissioned by AWARE.

According to those surveyed, survivors were not inclined to report the harassment as they “just wanted to forget about it”, “did not think the case was severe enough”, or “believed that they did not have enough evidence.”

Worryingly, the complaints of about half of those who did report harassment were treated negatively, either by having their reports dismissed, explained away, or coerced to not take further action, among others.

So what’s the solution?

Professor Jennifer believes that finding a solution to this is going to be difficult for as long as gender imbalances at the top of power hierarchies remain.

“Yes, women who experience such forms of harassment or discrimination need to speak out and report such incidents. But depending on the organizational culture and how seriously these reports are taken, speaking out can sometimes fall on deaf ears or even be punished”

“It will also reduce the ability of women at the top to point out to those who demonstrate some of these behaviors and attitudes how destructive and unacceptable they are without the fear of retributions in terms of job security, reputation, or financial standing”, she added.

Professor Jennifer suggests that reporting needs to be “paired with those at the top who set the explicit norm that such behavior will not be tolerated, swiftly punish those who do show such behavior and set a norm through one’s own behavior that women are treated and respected as equals.”

Companies need to do more about workplace harassment


Clearly, companies need to step up to ensure the safety and comfort of workers in tech. Many more companies, tech or otherwise, have enacted newer regulations on conduct in the workplace after the #MeToo movement came to light.

Most of these have occurred in supposedly liberal and progressive nations such as the US, so what can we expect from more conservative and largely patriarchal societies in Asia?

It has been years since the movement, but nothing has changed. In fact, women in tech are more afraid to speak out.

Many at the top are abusers and perpetrators of harassment and abuse themselves — and they get off scot-free due to the power and influence they wield in the company.

So while experts can prescriptively suggest methods to take perpetrators to task, it is imperative that such remedial actions are also extended to those at the top. Whether it is the founder, CEO, or directors, there should be clear checks and balances to ensure that these individuals in positions of power are held accountable for their actions, and duly punished for such violations.

Ideally, governments should also start drafting new laws to protect workers, especially women, from harassment, abuse, and toxicity in the workplace, in tandem with efforts by private organizations.

Otherwise, there is little left to hope for a future where employees are respected and unharmed.