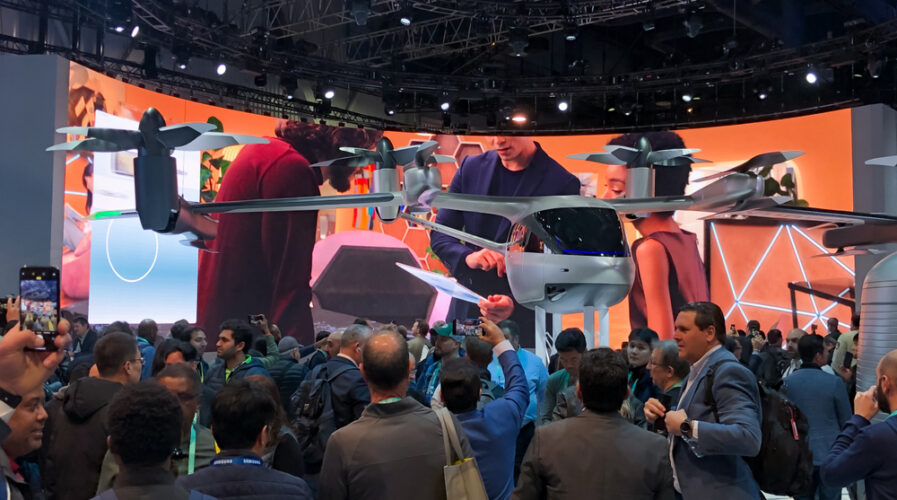 Throwback to the Hyundai-Uber exhibition at CES 2020, when tech conferences weren’t too held back by covid fears (IMG/Yugong Luo/Shutterstock)

Update (24 December 2021): A day after this article came out, more big tech names have suspended all on-site activity at CES 2022. They include Google, Lenovo, and Waymo, the self-driving vehicle unit of Alphabet (parent company of Google).

US chipmaker Intel told AFP that after consulting with health officials, it “will move to a digital-first, live experience, with minimal on-site staff” to reduce risk.

As of yesterday, it accounts for 90% of cases in certain states in the US, reported CNBC.

As the world prepared to return to normal, so did major in-person tech conferences — until the new Covid-19 Omicron variant started upending plans.

In the US, Omicron cases have been rapidly rising, prompting several major tech companies to cancel or limit their attendance at the 2022 Consumer Electronics Show (CES) — the tech industry’s annual mass-gathering in Las Vegas.

The popular four-day conference, which had planned for a grand return next month, is still scheduled to start January 5, with the press getting an early peek two days before.

But on Tuesday, a number of major tech firms such as Facebook parent company Meta, Amazon, T-Mobile, and Twitter canceled their appearances. Google told AFP that it is  “closely monitoring the situation” and would announce any update regarding its CES plans.

Electric vehicle automaker General Motors, however, has opted to remain at the tech conference, with plans to reveal its new EV model, the Chevrolet Silverado pickup truck.

The company had, in January, pledged to exclusively offer electric vehicles by 2035 and end production of combustion-engine ones.

Tech publications including CNET, The Verge, and TechCrunch also confirmed that reporters would not be sent to cover the event, adding to suspicions that CES might have to be delayed or canceled.

Over in Asia, the annual RISE Conference scheduled to take place in Hong Kong in March 2022 has been canceled, with organizers planning for a 2023 return.

In a fresh blow to an international business hub that has embraced China’s “zero-Covid” strategy, organizers of the tech conference chose to postpone because “uncertainties brought about by the pandemic have continued”.

According to AFP, the move came after organizers flip-flopped on their choice of venue, announcing last December that it would ditch Hong Kong for Malaysia before reversing that decision nine months later.

But as Malaysia faced a fresh surge of Covid-19 cases in the middle of this year, the company behind the event said it was “no longer feasible” to run it in the country.

RISE’s evolving relationship with Hong Kong has drawn attention at a time when major tech firms fret over Beijing’s crackdown on dissent in the financial hub.

But a national security law imposed on Hong Kong by Beijing last year has given authorities new controls including internet takedown powers.

RISE has previously stated that its choice of venues had nothing to do with Hong Kong politics.