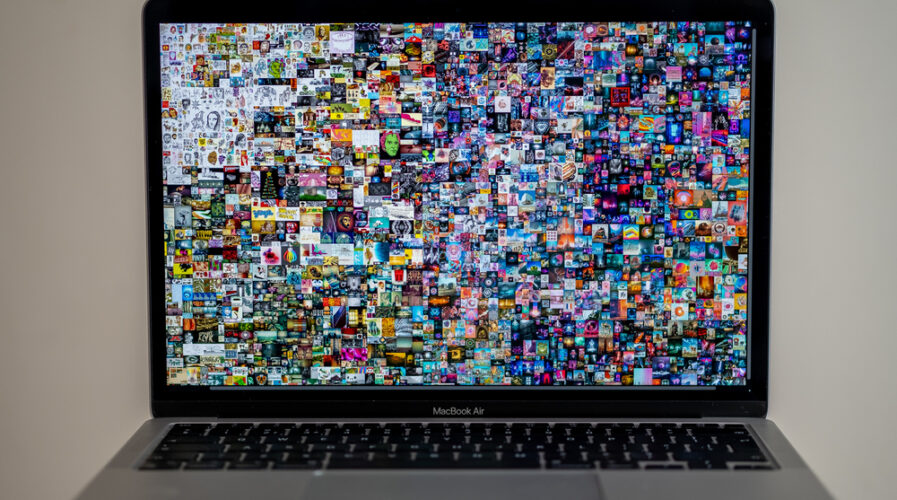 NFTs such as for Beeple’s collage, Everydays: The First 5000 Days, which sold at Christie’s for a whopping US$ 69.3 million, are traded on NFT marketplaces. (IMG/ mundissima/Shutterstock)

NFTs are being traded and have sometimes sold online for astronomical sums, with major companies now joining the craze as the tokens find their way into everything from the art market to video games.

But what exactly are these digital assets, and how are they traded?

What is an NFT?

Something that is “fungible” can be exchanged with an equivalent item — for example, a $5 bill with another $5 bill.

Here’s an explainer by Tech Wire Asia on how they’re different from cryptocurrencies.

Cryptocurrencies, which use a digital public record of transactions called a blockchain, are fungible.

NFTs are digital items that can be bought and sold using this blockchain technology. But they are not fungible, making them a different type of asset.

Some have sold for millions, including an NFT by digital artist Beeple which went under the hammer at Christie’s in March for an eye-watering $69.3 million.

Some of the most coveted NFTs are released via collections of thousands of unique individual cartoons, such as the Bored Ape Yacht Club.

They are seen as intrinsically cool by their owners, who enjoy boasting of their purchases by displaying them as their social media avatars.

The tokens aren’t necessarily images, though: on several websites, such as Decentraland and The Sandbox, you can buy virtual land in NFT form.

Critics say investors are spending money on meaningless items, but supporters insist that NFTs are much more than digital trinkets.

Some predict that using the blockchain to record the ownership history of an item will eventually become much more widespread, revolutionizing how we think about property.

How are NFTs traded?

Like cryptocurrencies, NFTs are traded (bought and sold) on specialized platforms. OpenSea is the best-known NFT marketplace.

A sale does not necessarily involve the transfer of the object depicted by the token.

NFTs of famous paintings have been sold, for example, but the buyer does not receive the painting.

What changes hands is a certificate of ownership of the NFT, registered on the blockchain The certificate must be kept safe in a digital wallet, which can take various forms.

The wallet might be accessed via Metamask, a free internet browser extension, or a secure physical device. It might also take the simple form of a code printed on a piece of paper.

To purchase an NFT, the wallet must contain enough of the relevant cryptocurrency — for example, ether (ETH) if the person is buying a token on the Ethereum blockchain.

With a little technical know-how, it is also possible to make, or “mint”, your own NFT.

Ultimately, NFTs are digital contracts, with certain rules embedded such as the number of copies available for sale.

What are the risks?

Trading NFTs involves technical processes that are sometimes misunderstood — and that can lead to investors not knowing quite what they are dealing with.

Every interaction with the blockchain involves fees to pay for “mining” — the hugely energy-intensive computer calculations needed to verify each transaction.

Thousands of users might rush to buy a much-coveted NFT as it’s minted, and they have to pay the fees even if they walk away empty-handed.

Some buyers use bots to try to ensure that they get their hands on a token, which makes the market even less accessible for newbie investors.

“A very small group of highly sophisticated investors rake in most of the profits from NFT collecting,” blockchain data company Chainalysis said in a recent report.

And it added that NFTs are often sold at a lower price to enthusiasts who have helped to create hype for the project.

“The data suggests that NFTs are far from a surefire investment,” Chainalysis concluded.

with additional reporting by Jules BONNARD for Agence France-Presse