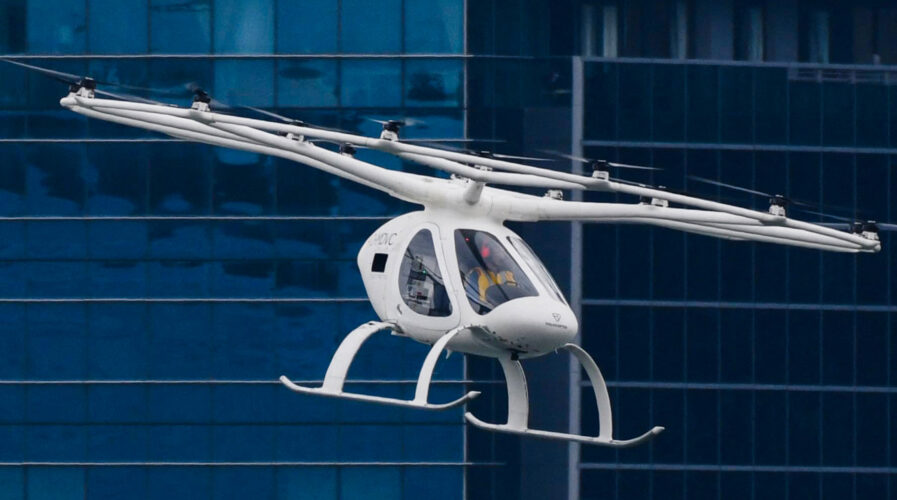 Volocopter, an urban air mobility company will be launching its air taxi services in Singapore in 2024. Singapore’s Seletar Aerospace Park has been selected as the Advanced Air Mobility (AAM) hub to enable the air taxi ecosystem.

Volocopter signed an MOU with Skyports, an enabler of advanced air mobility (AAM) and provides the critical link between the ground and the sky, JTC, and the Singapore Economic Development Boards to explore ways the aerospace park can support the growth of the emerging AAM sector in the republic.

FLYING TAXIS COULD BE IN THE SKIES OF JAPAN BY 2025

“Basing our APAC headquarters in Singapore has enabled us to expand rapidly into other countries across the region. For example, we established a joint venture with Geely in China, joined the Osaka Roundtable in Japan, and conducted South Korea’s first crewed public air taxi test flights. We believe the launch of UAM in Singapore will truly enhance the Lion City’s position as one of the most innovative cities in the world,” commented Christian Bauer, Chief Commercial Officer of Volocopter.

The agreement will draw on the vertiport developer’s experience of building take-off and landing infrastructure for air taxis, to explore ideas for the future development of Seletar Aerospace Park. This includes facilities like an air taxi vertiport terminal, airside facilities, and hangarage, as well as facilities to support research and development (R&D) and pilot training.

“Singapore is a trailblazer for future mobility in the Asia Pacific region and we are delighted to be working with Economic Development Board and JTC to explore all the elements required to create an advanced air mobility hub at Seletar Aerospace Park. Skyports has based its Singapore operations out of Seletar Aerospace Park and can already see the potential for the facility to be integrated into a future network of vertiports,” said Yun Yuan Tay, Head of Asia Pacific, Skyports.

Volocopter’s internal studies also show that its UAM services can generate an estimated SG$ 4.18 billion in cumulative economic benefits and create up to 1,300 local jobs by 2030.  The initial launch will be tourist flights over Marina Bay and Sentosa, then expand its network to include cross-border flights to the island of Batam in Indonesia and the state of Johor in Malaysia.

Volocopter is the only electric vertical take-off and landing (eVTOL) developer that has a family of electrically powered aircraft including air taxis for short and long urban routes (the VoloCity and VoloConnect) and heavy-lift drones for goods (the VoloDrone). It is also the first and only eVTOL company holding both the required design and production organization approvals (DOA and POA) to advance its aircraft toward commercial launch.

In 2019, Volocopter was the eVOTL company to conduct a crewed air taxi flight in a city. The flight over Singapore’s iconic Marina Bay in 2019 gave observers firsthand experience of what an air taxi looks and sounds like.