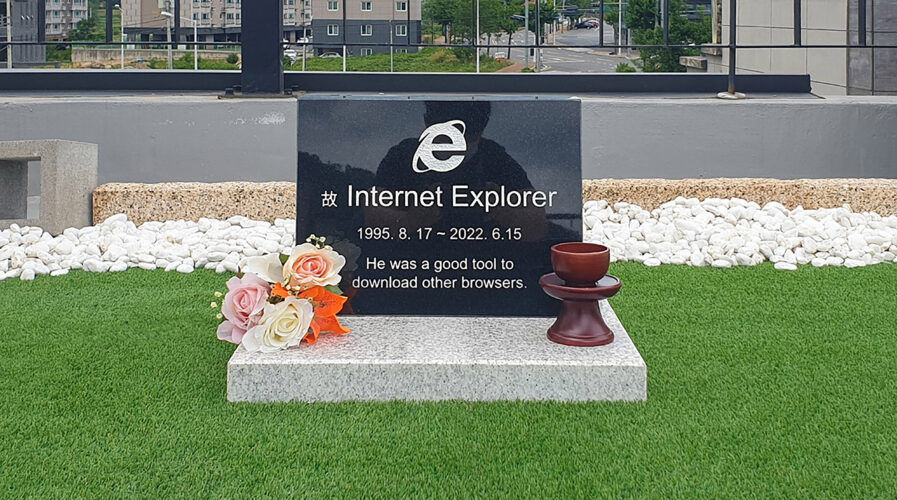 This undated handout photo provided courtesy of Kiyoung Jung on June 17, 2022 shows a grave for Microsoft’s Internet Explorer, which was retired by the company earlier this week after 27 years, in honour of the browser’s “death”, on the rooftop of a cafe in South Korea’s southern city of Gyeongju. – A South Korean engineer who built a grave for Internet Explorer — photos of which quickly went viral — told AFP on June 17 that the now-defunct web browser had made his life a misery. (Photo by Kiyoung Jung / Courtesy of Kiyoung Jung / AFP)

Microsoft actually informed this in a memo last year, before making it official. “The Internet Explorer 11 desktop application will be retired and go out of support on June 15, 2022, for certain versions of Windows 10,” the company said, adding separately that it will continue to support some forms of Explorer. The truth is, Microsoft Internet Explorer died many deaths in between — with the emergence of Firefox in 2002 and Google Chrome in 2008.

Microsoft saw as much of what was in the market and eventually developed Edge, a more secure and modern browser that launched in 2015. In a blog posting on June 15, 2022, Microsoft Edge Enterprise general manager Sean Lyndersay admitted how the web has evolved and so have browsers.

To recall, Internet Explorer launched alongside Windows 95, offering a first taste of the web to many people who hadn’t already used early browsers like Netscape Navigator. Undoubtedly, Microsoft Internet Explorer played a key role in popularizing the internet— it had 95% of usage share by 2003, and wasn’t eclipsed by Edge until 2019. Yet, the browser was also closely linked to some of Microsoft’s worst practices.

Although bundling IE with Windows helped web newcomers, it also stifled competition. Microsoft even had a US’ 2001 antitrust case against them due to accusations that the company abused IE restrictions to maintain Windows’ market dominance. It was also reputable for its poor security and its over slow pace of that turnaround only helped browsers like Google Chrome and Mozilla Firefox rise to prominence. Perhaps that is why the current Edge browser is based on Chromium rather than in-house tech.

What will happen to existing Microsoft Internet Explorer users?

Eventually, Internet Explorer will be disabled permanently as part of a future Windows Update, at which point the Internet Explorer icons on users’ devices will be removed. For IT professionals with organizations that use older, legacy sites as part of their normal business processes, Sean said they can easily automate IE mode so that those pages launch in IE mode automatically for their users. Notably, the Edge browser’s IE Mode will still receive support through 2029 or later, so you won’t be stuck if you just need compatibility with the older web engine.

In his blog posting, Sean also reckons that with IE mode, Microsoft Edge offers unmatched compatibility for the internet. “The future of Internet Explorer is in Microsoft Edge, giving you a faster, more secure and more modern browser,” he added.

Some are still very dependant on Internet Explorer

For a country like Japan, the death of Internet Explorer spells inconvenience mostly. A March survey by information technology resource provider Keyman’s Net revealed that a large number of organizations in Japan still relied on Internet Explorer. In fact, 49% of respondents said they used the browser for work.

In a report by Nikkei Asia this week, Japanese organizations said the browser was used for employee attendance management, expenses settlement and other internal tools. “In some cases, they have no choice but to use Internet Explorer because of clients’ systems used to handle orders. Over 20% of these respondents did not know or had not figured out how to transition to other browsers after Internet Explorer’s retirement.”

Surprisingly, Nikkei noted that government agencies are particularly slow to respond. It was only yesterday that the portal site for information on government procurement and bidding switched its recommended browsers to Microsoft’s new Edge and Google Chrome. “But for Japan Pension Service, notices concerning online applications must be viewed in Edge’s Internet Explorer mode. The website of a government-backed mutual aid corporation for private schools still listed Internet Explorer as its only recommended browser,” the article reads.