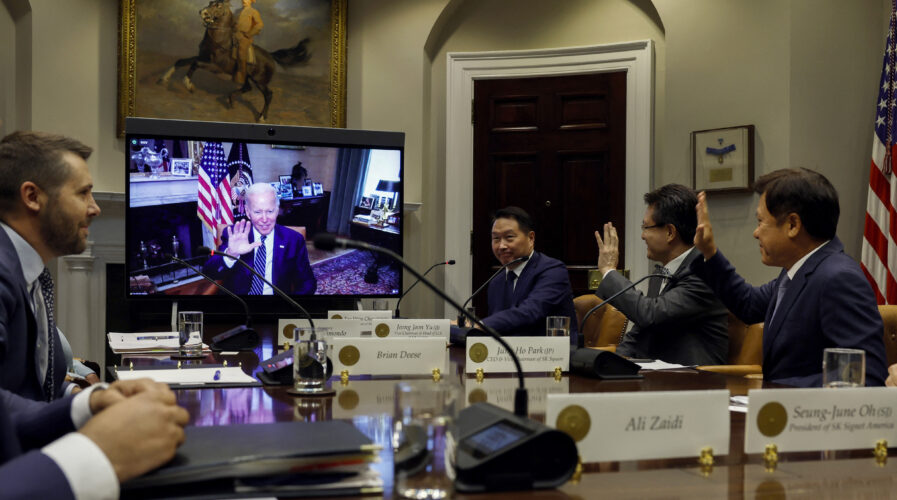 Here’s what South Korean giant SK Group is doing with its US$22b investment in the US. (Photo by Anna Moneymaker / GETTY IMAGES NORTH AMERICA / Getty Images via AFP)

South Korean second largest conglomerate, SK Group, has been operating in the US over the last three decades through several of its companies, with sites in more than a dozen states. In the past two years alone, SK companies have invested US$5 billion, growing their US assets to US$13 billion and doubling employee headcount to more than 4,000 today.

Then in May this year, SK companies announced its plans to invest an additional US$30 billion in the US by the end of 2025, nearly tripling their US assets and quadrupling the number of US employees. The South Korean conglomerate’s investments were mainly driven by a global strategy to advance new sustainable businesses.

While most of us following the news would have reckon that the company is done with its intended investments–at least for now–we are in for a surprise. The South Korean second-largest company just announced that it is pouring in another US$22 billion into the states, focusing on high-priority areas including chips and clean energy.

The funding announcement, coinciding with a key vote in the US Senate on Tuesday to push forward a bill that seeks to increase domestic production of semiconductors, came even after the group’s massive chipmaking unit warned of weaker consumer demand for technology products for the rest of the year. That said, SK Group said it would direct the funding to increased production and development of semiconductors, electric vehicle batteries, and pharmaceuticals.

The landmark deal, expected to create more than 15,000 jobs, were announced by leaders from the mammoth SK Group to US President Joe Biden virtually on Tuesday. The exact timeline for the investments were however not disclosed, but Biden did say that the Seoul-based corporate giant plans to grow its US workforce from 4,000 to 20,000 people by 2025.

We had SK Group at the White House for a meeting today.

They’re investing billions in producing microchips here at home – which will help our supply chain and create jobs. The meeting was virtual, but I couldn’t miss the opportunity to say “hello” – even at a distance. pic.twitter.com/vrizC8UN11

Up to US$14 billion of the investment will go toward building two new gigafactories in Tennessee and Kentucky, in a joint venture with Ford, the group’s chairman Tae-won Chey said, in remarks made public by the White House. “SK will invest half of our total investment amount in the US in the semiconductor ecosystem.  Well, this money will fund R&D programs in partnership with the leading American universities and restoration of advanced packaging (inaudible) in the US. Well, this initiative will contribute to developing the next generation of memory chips, which will benefit the entire US high-tech industry,” Chey added.

He also shared that US$5 billion from the US$22 billion will be poured into other green energy businesses, including the ultra-fast EV charging system, the green hydrogen, and battery materials, recycling, and also small modular reactors. “Also, our investment will expand our facility in the US in the bioscience and bio pharmaceutical sectors. We believe our initiatives will contribute to strengthening the US supply chain resilience and to address climate change,” Chey said.

For Biden, the announcement is simply an “evidence that the US, Korea and its allies are back, and winning the technology competition of [the] 21st century.” He iterated how “In the past, these kinds of technology investments went to China.” The president recently had the chance to witness South Korea’s advanced manufacturing capabilities during his trip to the country in May. At that point, he also visited a Samsung factory and met with the chairman of Hyundai.

For context, South Korea is among the four countries that are a part of the US-led Chip 2 Alliance. While Japan and Taiwan were quick to agree to the US on the Chip 4, South Korea has not directly agreed to it, considering its economical ties with China. Josep Bori, Research Director in the Thematic team at GlobalData, reckons “South Korea is in a tough position, as it will want to balance its exposure to the Chinese market, including its local manufacturing capability, with its exposure to the US market and its significant reliance on US semiconductor manufacturing equipment and design software.”

Overall, given the control that the US, South Korea, Taiwan and Japan exert over the global semiconductor supply chain, GlobalData said it is understandable that China is concerned about the planned Chip 4 alliance. “Particularly so with South Korea, as it dominates in areas such as memory, materials, wafer fabrication, and equipment.”