Be heard and included, join the Micron Singapore team today

As a world leader in innovating memory and storage solutions, Micron’s success depends on attracting and engaging the brightest and most talented people in the world. In Singapore, Micron’s presence has been established for over two decades, and today employs well over 9,000 team members.

So why are employees of all backgrounds and capabilities staying with Micron Singapore, and what is the company doing right that has seen it repeatedly recognized as a Great Place to Work® in the distinguished Best Workplace List®, as one of the 2022 World’s Most Ethical Companies®, and as one of Fortune magazine’s Best Workplaces in Manufacturing and Production, to name a few?

In Singapore itself, Micron is much more than just a technology company. Long-time team members say that Micron is a great place to work because the company supports the personal development journeys of its varied workforce. It goes the extra mile to care for its team members – at Micron, everyone is a member of the team and not ever referred to as just a worker – by reinforcing the company’s core value of putting people first.

This people-centric focus showcases why Micron was named a Great Place to Work in the Singapore Best Workplaces 2021® rankings, with a whopping 91% of its employees reporting a welcoming atmosphere in the workplace. A big part of the organization’s ethos revolves around the inclusivity of all individuals, with a wide variety of programs and experiences designed to highlight the diversity, equality and inclusion (DEI) policies that Micron holds dear.

A key way Micron promotes participation and representation of its activities is by establishing Employee Resource Groups (ERGs), that ensure no group is left behind, including people of different ages, ethnicities, abilities and disabilities. One of the ERGs is Capable, which emphasizes DEI placements and a culture of acceptance for team members across a broad spectrum of abilities. “We aim to unite individuals dealing with different unique abilities, and those caring for others by providing opportunities – to educate as well as to increase awareness, support career development, and also influence our policy decisions,” explained Lily Liu, a senior manager in product integration at Micron, and one of the leaders of the Capable ERG in Singapore. 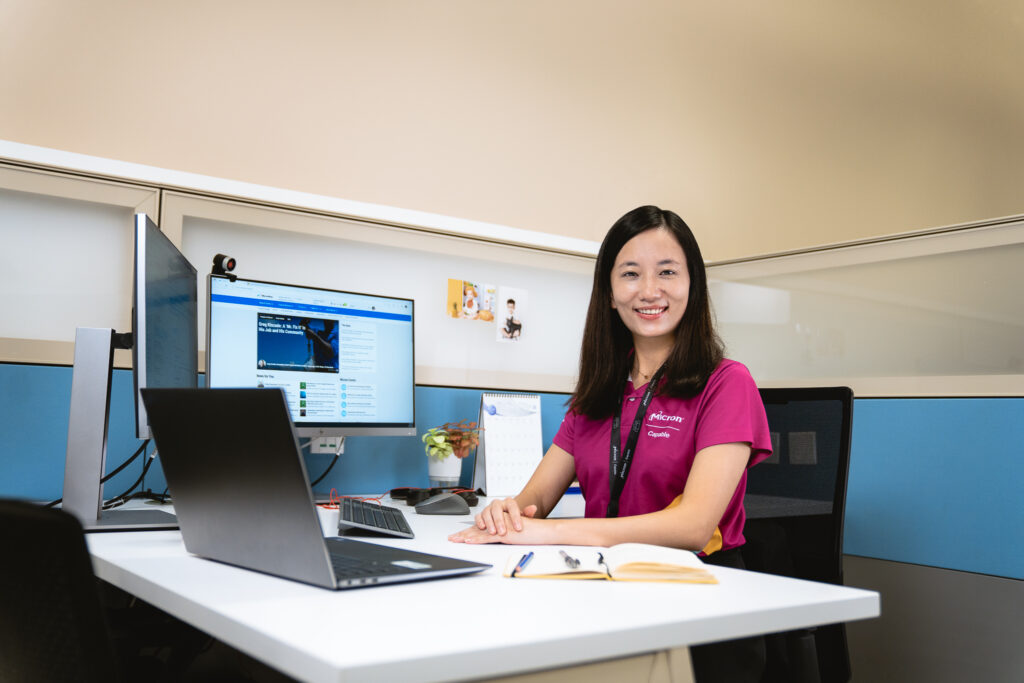 The Capable ERG strives to foster workplaces where “both seen and unseen disabilities are embraced”, according to Lily, “allowing Micron team members to strive and succeed in a climate of increasing acceptance and equity.”

Capable has been making inroads to achieve this target not just within Micron, but around Singapore by following a “best in class strategy model to set and achieve goals focused on basically the 4Cs: culture, career, community and commerce.”

ERG leaders in Micron use this model to build more intentional, actionable objectives for Capable around these 4Cs. For Micron Singapore, there are two main focus areas in 2022. “First is to continue to do more for digital inclusion. Since the start of Capable, we always tried to do a lot for digital inclusion [both within Micron and the surrounding communities] because Micron is a technology company and most of us are engineers,” mused Lily. “So we’re always very proud to use our own technology and products to enable digital inclusion, to give back to society as well as to benefit our Micron Singapore team members more.”

Another focus of Lily’s is on the ‘Bring Capable Closer to You’ campaign, “Because apart from producing technology products, we also always try to create a friendly environment and inclusive workplace for our team members with disabilities,” she said.

‘Bring Capable Closer to You’ is accomplished in two ways. First is about the workplace or the physical environment. “Facilities at Micron campus, not just the office area, but the meeting rooms and areas like our pantry area, rest area, canteen and cafeteria areas, all these should be accessible easily by people with disabilities.”

Second way is to boost the acceptance that people with disabilities can perceive the world in unique ways, though some of them might have experienced personal challenges. Thus the Capable mentorship program, where senior execs can mentor these team members by learning their unique situations, and see if they can help address any issues. “I always tell my colleagues with disabilities that I would like to lend my shoulder and my ears to hear from them, to listen to them to see what other concerns they have, and to build better bonds.”

Change is the key to opportunity 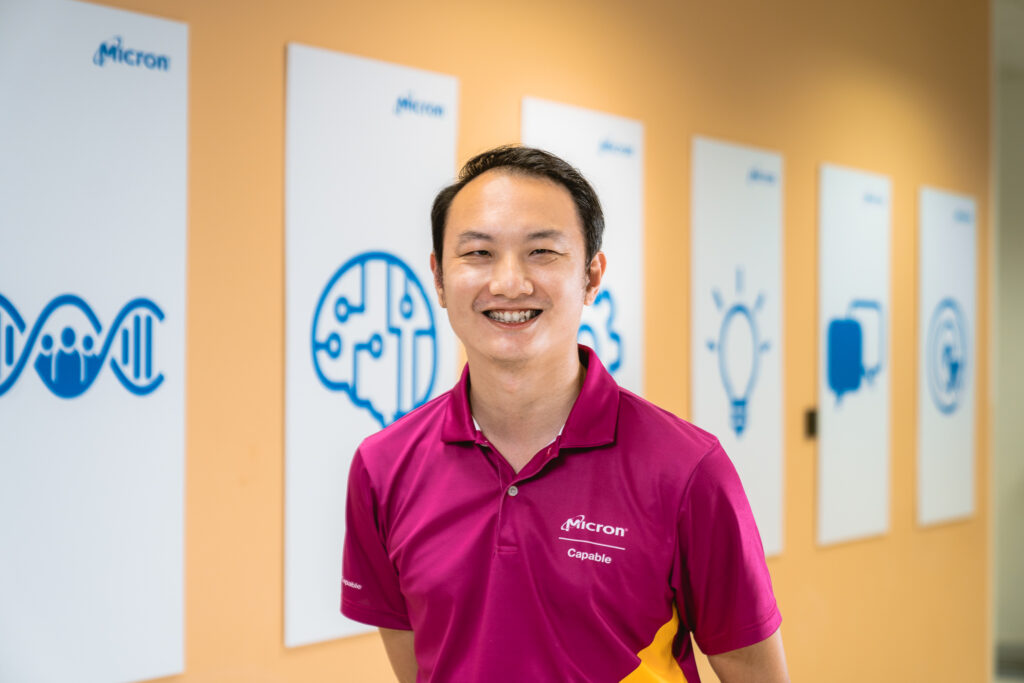 Being heard and changing the perspectives on living and working with disabilities is what motivated Jerry Chong, an engineer at Micron Singapore, who was born with cerebral palsy. Following a surgical procedure, his condition improves despite still having to walk with a slight limp.

“What inspired me to pursue a career in engineering is actually the ability to change,” claimed Jerry. “The key will be change because engineers make things happen, we create changes.” And he did make changes.

After starting out as a module equipment technician in another company, Jerry grabbed the opportunity presented by Micron Singapore to explore a career in process engineering. He says Micron gave him the opportunity to train and learn, and, when he was ready, did not hold back further opportunities from him.

Jerry had to start out as a technician as financial commitments at the time meant he could not pursue university studies immediately after his National Service. But once he made the change to Micron, and showed promise, the company supported him and gave him that higher learning opportunity – according to Jerry, the same sort of opportunities that might be given to a more conventionally-abled colleague.

“When I felt the time was finally right [to do my undergraduate degree], my leaders were fully supportive of it. And I was given the same opportunity [as a regular individual], the same platform. And I was being held to the same standard, nothing less.” 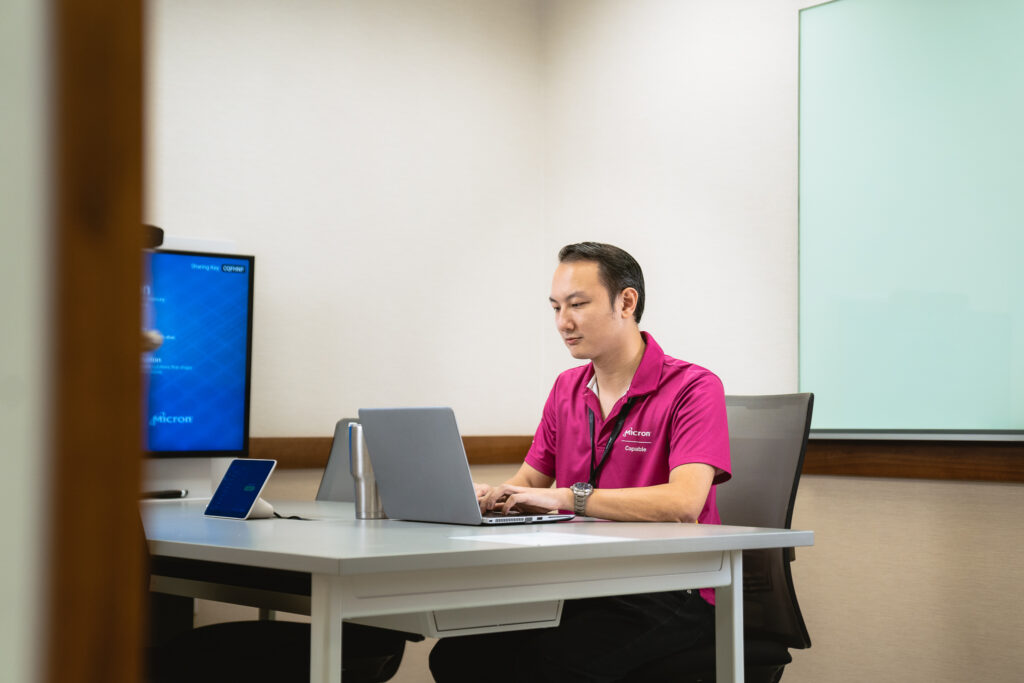 Jerry is very grateful for the chances he received over his eight years at Micron Singapore, from learning new skillsets with encouragement and guidance from management, to once-in-a-lifetime moments such as shooting a video package for the company, being able to participate in the presentation to the President of Singapore and a sharing session with the CEO of Micron and his executive team.

Jerry says he wants to inspire others with his career journey, and credits his leaders and the positive, nurturing environment at Micron as being instrumental to his growth as both an individual and as a professional. “The support is actually the confidence the leaders have in you, it is very important because in order to achieve something, probably I may not believe it myself,” he went on. “For individuals with some special needs, we will definitely assess the situation, whether we can or can’t do it. So when we are ready we will try it – in order to be able to try it, the opportunity must also come.”

The engineer pointed out how the needs of any team members with disabilities, be they visually impaired or hearing impaired (for instance), only had to reach out to their leaders to get facilities or special arrangements set up to facilitate an improved working experience. “If we have such requests, they will assess it and if it’s possible, definitely it will be incorporated,” he enthused. “They actually engaged a team to study solutions so that when we have a Zoom presentation, it will have subtitles in different languages to accommodate hearing-impaired co-workers across different regions.”

Jerry has seen his personal development blossom at Micron Singapore thanks to a host of inclusive activities, from selecting senior leaders for one-to-one mentoring to picking up company-provided seminars to learn soft skills such as public speaking.

Micron Singapore celebrates every major cultural happening like Christmas and Chinese New Year, leaving no one out, but company leaders do not just support team members during the feel-good times. “They also provide additional support and understanding during hard times. For example, even now we still have the flexibility to have work-from-home arrangements and this allow parents to take care of their children at home, if they are on home-based learning during the pandemic,” the young man continued. 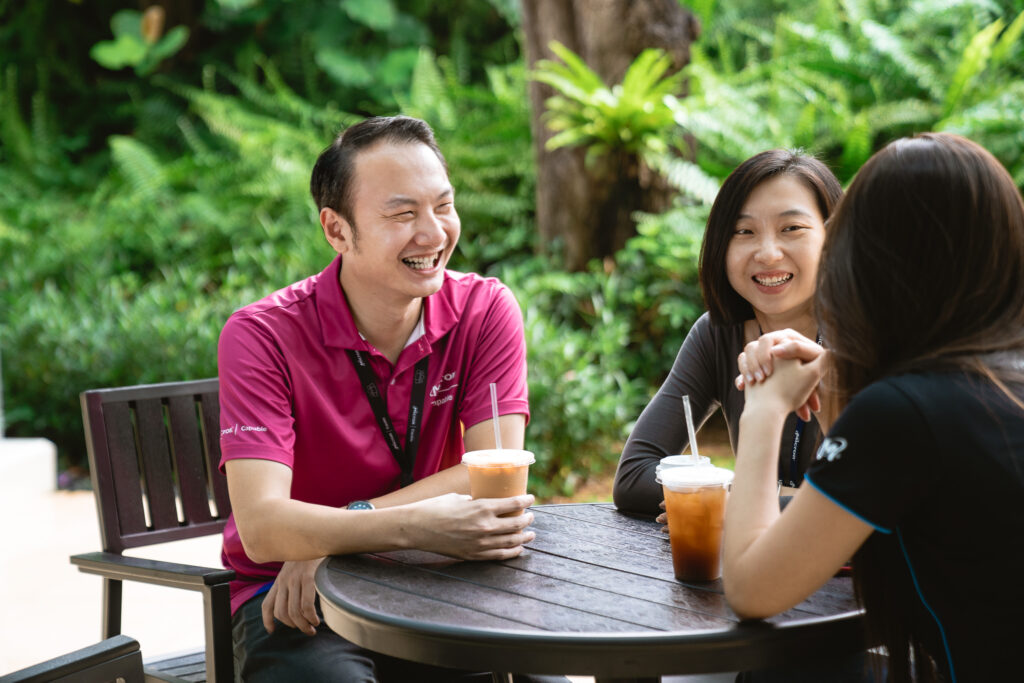 Jerry thinks the most wonderful part is that leaders and the team members are always open to communication. And if any special arrangement is needed in the context of work – the arrangement can be made. “[Micron Singapore leaders] are very flexible to open and honest discussions for solutions to meet your special needs. And of course, they also have programs for further studies. Like what I’m doing now: it allows me to study to improve my skill sets while still not neglecting work.”

Jerry is currently furthering his studies in computer science, benefiting from subsidized tuition fees thanks to Micron Singapore – after going through a stringent selection process, just like anybody else. He believes the sky is the limit for the personal and professional development potential at Micron, for team members from all walks of life. And the additional know-how that he picks up will eventually contribute back to the business in the long run.

“So once I learn more skills, I can deploy those skills. And because I’m doing a degree in computer science, I can leverage some programming knowledge in some automation and productivity improvement taskforces that I am already involved in.”

Be part of the workforce which gives back to the community

Micron knows that education and a strong community are vital to the success of both society and innovative companies. Each of Micron’s sites around the world know and understand the complex needs of their community and provide the necessary support. One example was Micron Singapore donating 40 refurbished desktops and 12 laptops equipped with Micron’s own solid-state drives to the Dyslexia Association of Singapore, helping students cope with their learning differences with easily accessible online classes and essential intervention programs. The project was an instance of inter-departmental collaboration between Capable, Micron’s IT team, and the corporate social responsibility-oriented Micron Foundation.

Fresh graduates and postgraduate students who are looking for their forever employment home, irrespective of preconceived ideas of their abilities, can pursue a full-circle future at Micron Singapore.

Learn more about talent and career opportunities at Micron Singapore, truly a Great Place to Work.