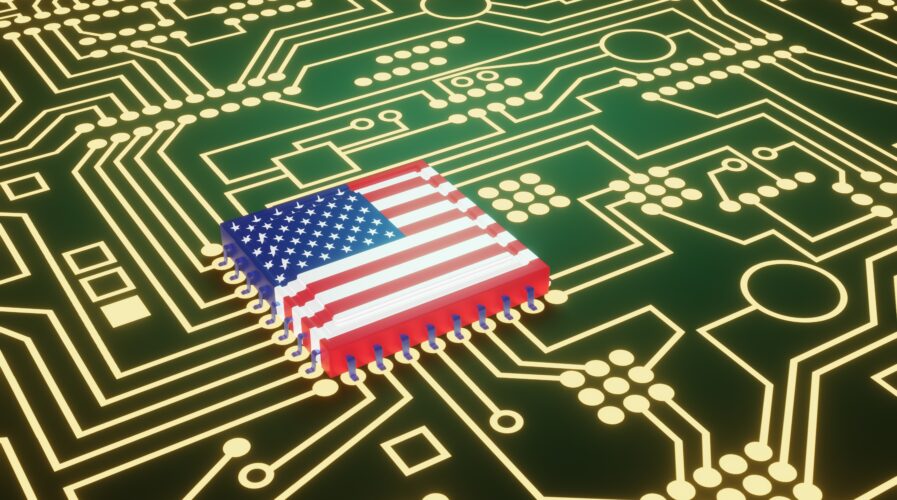 Chips Act: How will it impact the semiconductor industry in China and the US?

Washington has been relentlessly raising its efforts to curb the development of China’s chip industry, which has grown by relying on imported technologies. In fact, tomorrow, President Joe Biden is expected to sign the most sought after Chips Act into law — to subsidize the US semiconductor industry and make it more competitive with China. The billion of dollars of effort is expected to weaken China’s role in global semiconductor supply chains — but to what extent?

The bill, passed two weeks ago, includes more than US$52 billion in funding for semiconductor manufacturing and research, which the Biden administration has singled out as an urgent priority in US competition with Beijing. While chip makers in general welcomed Washington’s long-awaited passage of a bill to provide funding for the US semiconductor industry, they are torn in between as accepting those subsidies could tie their hands when it comes to future investments in China.

Which means, chip giants like South Korea’s Samsung Electronics and SK Hynix who both have presence in the UK and China, will be restricted from shipping new technology tools to factories they operate in China. Samsung and SK Hynix, which control more than half of the global NAND flash memory chip market, have invested heavily in China in recent decades to produce chips that are vital to customers including tech giants Apple, Amazon, Facebook owner Meta and Google.

Besides computers and phones, the chips are used in products like electric vehicles that require digital data storage. In short, being the receiver of the Chips fund would prevent both Samsung and SK Hynix from upgrading plants that serve customers around the world. China itself has not stayed put since the semiconductor bill surfaced over the last two years. The Chinese Embassy in Washington even said China “firmly opposed” it, calling it reminiscent of a “Cold War mentality”.

Besides the chips act, Washington has also been promoting the so-called Chip 4 Alliance – a partnership envisioned by the US to include South Korea, Japan and Taiwan – to exclude China. All while US officials are also lobbying Dutch chip equipment giant ASML to stop selling more lithography systems to wafer fabs in China. There are even recent updates indicating that the US is mulling a ban on the shipment of US chip making equipment to factories in China that manufacture advanced NAND chips, which would be the first time it has targeted the memory chip industry.

The report comes just days after US senators, including Senate majority leader Chuck Schumer, wrote to US Commerce Secretary Gina Raimondo to request that Chinese chip makers such as  Yangtze Memory Technologies Corp (YMTC) are added to a US trade blacklist. Unlike SMIC, which was added to the US Entity List in December 2020, YMTC – which has kept on relatively good terms with Washington since it was founded in 2016 – is not on any US trade blacklist.

For context, talks of a potential ban come as YMTC has been ramping up the construction of its second manufacturing plant in Wuhan to bolster output and advance its production level. The company started installing equipment at the new chip plant in June, and could produce 196-layer 3D NAND flash memory as early as 2023, Nikkei Asia has reported.

YMTC had a global market share for NAND flash memory chips of 5% last year, and is on track to surpass 10% by 2027, according to industry research firm Yole Development. Media reports even indicate that Washington is generally pushing for stricter export regulations to China by covering equipment needed for manufacturing chips at 14-nanometre and below. Such a move would make it harder for China’s top chip maker Semiconductor Manufacturing International Corporation (SMIC) to expand into advanced chipmaking.

So far, even before the enactment of the Chips Act, China’s semiconductor industry has been showing signs of flourishing, leaving the Biden administration wondering if their efforts to counter its growth is working. According to data provided by industry body Semi, Chinese orders for chip-manufacturing equipment from overseas suppliers rose 58% in 2021, making it the biggest market for those products for a second year running.

“Keep in mind that more than 40% of the equipment spending in China is by multinational corporation operating facilities there to produce closer to the large contract assembly base,” said SEMI head Ajit Manocha. “Furthermore, the great majority of the installed base capacity for foundries in China is for lagging-edge technologies.” 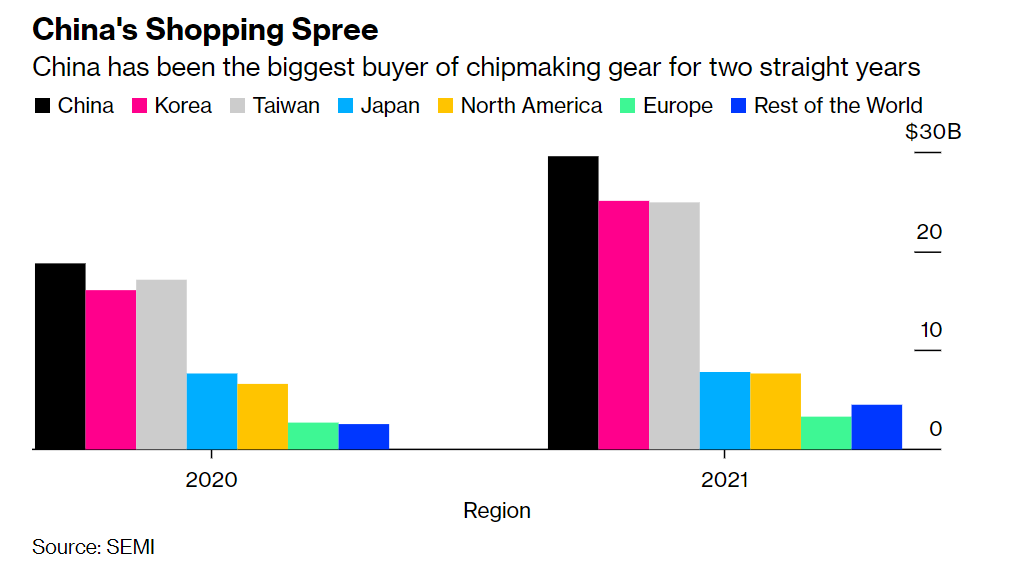 China has been the biggest buyer of chipmaking gear for two straight years.
Source: Bloomberg & SEMI

It is fair to note that Chinese companies aren’t the only ones losing out. Boston Consulting Group (BCG) estimates that US companies would lose 18% of their global market share and 37% of their revenues—leading to the loss of 15,000 to 40,000 high skilled domestic jobs—if Washington pursued a hard technological decoupling and completely banned domestic semiconductor companies from selling to Chinese clients.

In contrast, the US would only lose approximately 8% of global market share and 16% of revenues if Washington does not expand the existing Entity List export restrictions. Yet, the costs of decoupling would be even higher for China, whose producers are completely reliant on imports of electronic design automation (EDA) tools and semiconductor manufacturing equipment (SME) designed by foreign firms such as ASML and Applied Materials.