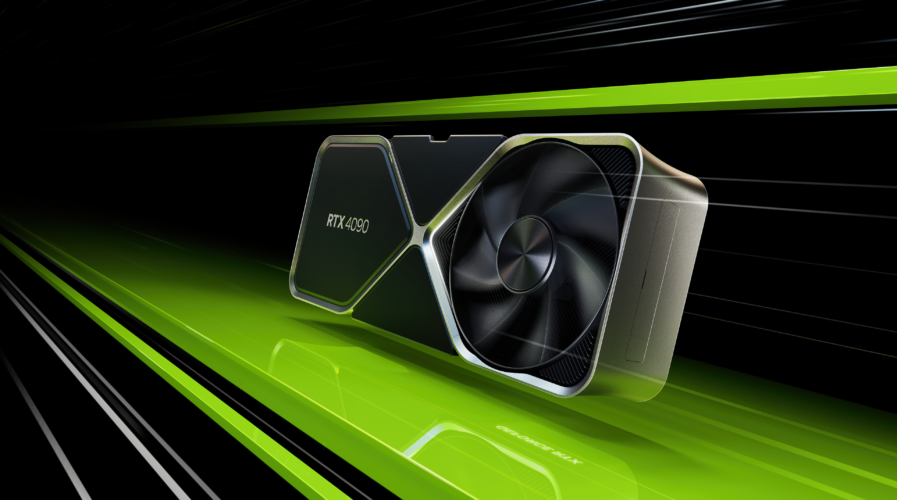 Nvidia may have lost nearly half of its stock value this year, but the semiconductor bellwether has been growing at a fantastic pace in terms of growth. Till date, it continues to lead in the when it comes to graphics processing units (GPUs) and artificial intelligence (AI) chips — all while making a big push in the automotive business. On that momentum, the US chipmaker announced a slew of new chips for gaming, AI, as well as autonomous driving space.

Nvidia founder and CEO Jensen Huang Jen-hsun during the company’s GPU Technology Conference on Tuesday, unveiled its new H100 AI processor, a successor to the A100 that’s used today for training AI systems to do things like translate human speech, recognize what’s in photos and plot a self-driving car’s route through traffic.

The A100 is basically the highest-end member of the family of GPUs that propelled Nvidia to business success. With the company’s NVLink high-speed communication pathway, customers can also link as many as 256 H100 chips to each other into “essentially one mind-blowing GPU,” Huang said at the online conference. The A100 is based on a design called Hopper, and it can be paired with Nvidia’s new central processing unit, called Grace, the CEO noted during the conference. 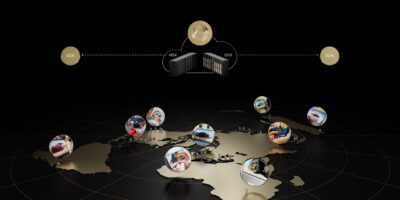 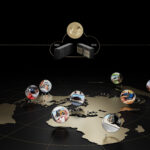 Huang shared that the H100 GPUs will ship in the third quarter of this year, and Grace is “on track to ship next year”. Currently, there is actually plenty of competition for the H100, which is composed of a whopping 80 billion transistors that make up its data processing circuitry. Rivals include Intel’s upcoming Ponte Vecchio processor, with more than 100 billion transistors, and a host of special-purpose AI accelerator chips from startups like Graphcore, SambaNova Systems and Cerebras. 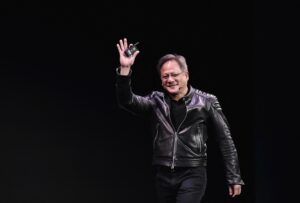 No doubt, Nvidia has gained attention in recent years with its booming data center business, which sells chips used in AI work such as natural language processing. However, the company’s roots are still in graphics chips, which still provided 59% of its US$26.9 billion in revenue in its most recent fiscal year. During the conference, Huang also introduced the company’s newest series of graphic cards known as Ada Lovelace.

“The world’s first GPUs based on the new NVIDIA® Ada Lovelace architecture, the RTX 40 Series delivers massive generational leaps in performance and efficiency, and represents a new era of real-time ray tracing and neural rendering, which uses AI to generate pixels,” Nvidia said in a statement.

While Nvidia designs its chips, the company has them manufactured by partners and Huang said these latest series of chips will be made by Taiwan Semiconductor Manufacturing Co (TSMC) with its 4N chip-manufacturing technology, a change from Nvidia’s previous generation of flagship gaming chips, which were made by Samsung Electronics. Huang also announced NVIDIA DLSS 3 — the next revolution in the company’s Deep Learning Super Sampling neural-graphics technology for games and creative apps.

The AI-powered technology can generate entire frames for massively faster game play. It can overcome CPU performance limitations in games by allowing the GPU to generate entire frames independently. The technology is coming to the world’s most popular game engines, such as Unity and Unreal Engine, and has received support from many of the world’s leading game developers, with more than 35 games and apps coming soon, Nvidia said.

Nvidia’s global GeForce marketing vice president Matt Wuebbling, in a web briefing said the Lovelace chips will be available for sale globally and are not affected by a recently imposed US ban on selling Nvidia’s top data center AI chips to China. To recall, in the second quarter of this year, Nvidia’s gaming department revenue was down 33% year-over-year (YoY) to US$2.04 billion, which was a sharper decline than the company anticipated.

The miss was attributed to the lower sales of its gaming products, which are primarily graphics cards for PCs. In contrast, the company’s data center business did slightly better with a 61% increase on an annual basis to US$3.8 billion, driven by what the company calls “hyperscale” customers, which are big cloud providers.