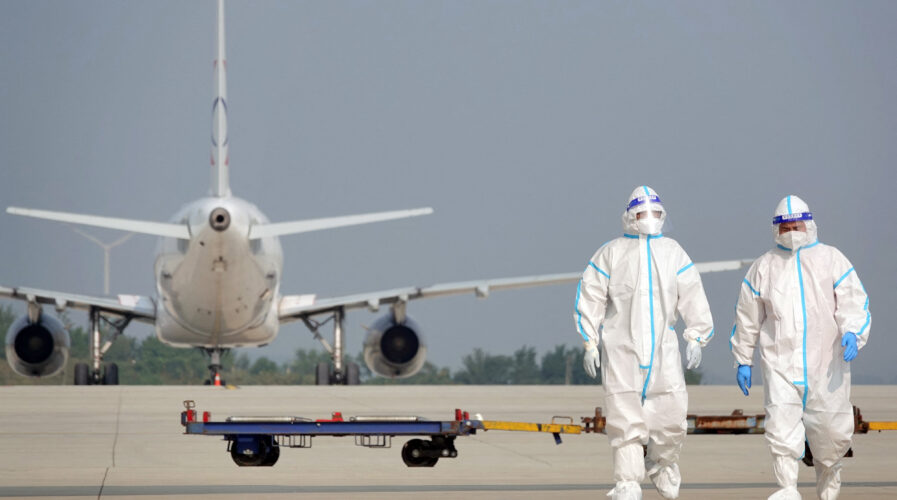 China is finally reopening its borders but Covid has eroded its luster as a manufacturing hub. Now what? (Photo by AFP) / China OUT

As China reopens its borders, Covid-19 has already eroded its luster as a manufacturing hub. Now what?

Since China had imposed its Zero Covid policies and shut its borders, the world witnessed further erosion in the country’s long-time dominance of global trade. Considering how China has been the factory of the world for the past four decades, the pandemic had simply triggered a reckoning of that status. Gradually, China were losing more manufacturing and export market share in key sectors to its Asian neighbors.

Looking back, China’s rise as the world’s factory spanned four decades and those years had eventually ushered in an era of globalization and integrated supply chains. It all started in 2018  after President Donald Trump launched a trade war against the economic powerhouse. The move was the first of many that would come after from the US and in turn, it has left investors to reassess their geopolitical risks.

In retrospect, there were a handful of companies that had moved parts of their manufacturing facilities out of China during the Trump era, but essentially it was the pandemic — and China’s zero-Covid policy — that emphasized the importance of not depending on one country for manufacturing needs. The whole world realized that, and that then ushered in an era of diversifying supply chains.

But now, China wants to reopen its borders — after three long years — and the decision is the last step in the country’s pivot to living with the virus. The latest update from Beijing is that China will reopen borders and abandon quarantine after it downgrades its treatment of Covid-19 on January 8, 2023.

Under the Covid Zero Policy, authorities must impose the toughest restrictions such as quarantine and isolation of the infected and their close contacts, and citywide lockdowns to contain those diseases. At the border, the infected must be isolated and those who might be infected quarantined, depending on the incubation period.

But a report from the South China Morning Post indicated that three sources from provincial health authorities and hospitals in Guangdong, Fujian and Jiangsu said they were notified by the National Health Commission on Sunday, asking them to prepare for the downgrade to category B management from January 8. That category means Covid-19 only requires “necessary treatment and measures to curb the spread”.

For the locals, the instructions in black and white from the central government means they can proceed firmly towards opening and restoration of normal life, without worrying about reversal of Covid-19 policies. For multinationals, the Covid Zero Policies and the complicated web of US-China trade tensions that may see no end, have pushed them to hedge their business risks.

When it comes to higher-end manufacturing, India is indirectly unseating China especially with the iPhone maker Apple and chipmakers eyeing its vast land as well as young and growing population. In fact, the UN’s Department of Economic and Social Affairs said in a July report that India is set to surpass China in 2023 as the most populous country.

The progress so far is that Apple has started moving some of its iPhone production to the Indian states of Tamil Nadu and Karnataka and is exploring moving its iPad manufacturing to the South Asian nation. As reported previously, JPMorgan analysts in September 2022 said they expect Apple to move 5% of its iPhone 14 production to India by the end of 2022. They even believed 1 in 4 iPhones would be made in India by 2025.

On the other hand there is Vietnam, a country that has been undergoing rapid economic reform since 1986, and that has yielded significant returns. And just like China, as a communist country, Vietnam has been undergoing rapid economic reform ever since the late 80s. It is even apparent that the reforms have yielded results as Vietnam from being “one of the world’s poorest nations”, have evolved to be “a middle-income economy in one generation,” The World Bank said in a November post.

The most recent context would be in 2021 itself when Vietnam attracted over US$31.15 billion in foreign-direct-investment pledges — up more than 9% from the prior year, according to the country’s Ministry of Planning and Investment. What is more impressive is that about 60% of the investments went into the manufacturing-and-processing sector.

Even Apple has moved some iPhone manufacturing to Vietnam and is even planning to move some of its MacBook production to the Southeast Asian nation. Among other companies that have shifted some of their production lines out of China to Vietnam are Nike, Adidas, and Samsung.

Still, there is no doubt that China retains tremendous advantages as a manufacturing center built up over the past several decades. Its enormous and rapidly expanding domestic market provides a powerful incentive for investment in capacity of all kinds. Southeast Asian nations, even India, still have enormous hurdles to overcome in competing with China, as trade experts reckon.

For most companies, picking a new country, or countries, is not easy. It is safe to say that no country has the logistics set up like China has. So it is left to see how and what would China do to protect its economic interest.