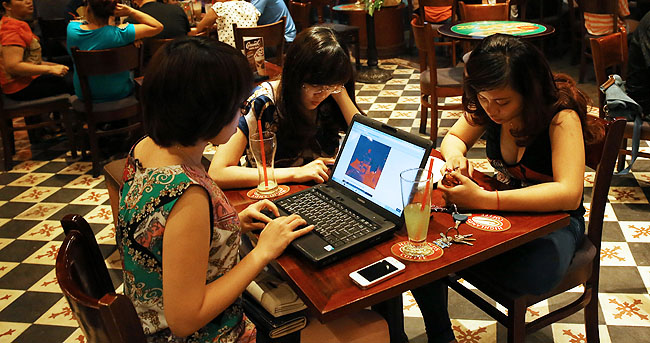 Vietnamese girls use a laptop and smart phones to go online at a cafe in Hanoi. Pic: AP.

Vietnamese girls use a laptop and smart phones to go online at a cafe in Hanoi. Pic: AP.

If there were two certainties to life in America – death and taxes – then there is one in foreign news coverage of Vietnam: censorship. Whether it is the locking up of many dissidents or the occasional release of one, the blocking or unblocking of social media sites or a brief release upon never-quite-stated strictures, it is as inevitable as typhoons are during Autumn on the country’s central coast.

The latest news? Prime Minister Nguyen Tan Dung has publicly said that the government should use social media to engage the populace. Banning it is impracticable. Banning Facebook, specifically, is not about to happen he said last week, according to the AFP.

“You are all on social media, checking Facebook for information. What should be done to have correct information?” Nguyen Tan Dung reportedly told officials. “It’s impossible for us to ban it.”

He added that the government “must give correct and timely information to guide opinion. Regardless of what is being said on the Internet, people will believe when there is official information from the government.”

Facebook has had an interesting time in Vietnam. Contrary to perceived wisdom it was never officially banned. Rather it was intermittently blocked by various ISPs. A leaked draft decree telling internet service providers to block eight websites, including Facebook, was leaked and very quickly did the rounds online. The government never actually owned up to it nor specifically said that Facebook was outright banned or officially blocked.

Then Foreign Ministry Spokeswoman Nguyen Phuong Nga told local media, “a number of social websites have been misused to convey information with contents (sic) that oppose the Democratic Socialist Republic of Vietnam … threatening information security.” “Misuse” of information, democracy, freedom or whatever is a favoured term the government uses against dissidents.

At the time I called it a “smoky bamboo fence”, compared with China’s Great Firewall. After all, at what passed for the height of the Facebook block (which was always and easily circumventable with a VPN or even fiddling with DNS settings), Nokia was still advertising its new smartphone’s Facebook access on billboards. Facebook in fact has had one of the fastest rates of uptake in the world, though as elsewhere the very young are less interested as they have their own, obviously cooler, platforms. Few paid heed to the block, preferring to fix the “technical difficulties” and get back to posting pictures of themselves.

The block was, according to Vietnam expert Professor Carlyle Thayer at the Australian National University, instituted in 2009 to prevent the online organisation of once disparate groups to protest billion-dollar Chinese-run bauxite mines in the Central Highlands. Though Catholics, environmentalists and democracy activists may have each had their own individual axe to grind – even when their issues overlapped – the unpopular bauxite mines gave them a common cause for worrying mass organisation and the recently adopted Facebook was a useful platform. The government reaction was hardly swift, or well coordinated, but it still sent a message and disrupted plans.

After first launching its own social media platform (users had to give their full identification details before they could ‘friend’ various communist luminaries) that fell through without much attention, the government slowly repealed the block and Facebook became more easily accessible again. Of course the government still blocks blogs and websites and there is sometimes a notable correlation between internet speeds dropping (thanks to yet another underwater cable being cut or damaged) and the politically interesting times during which these disturbances occur.

Dung’s comments are a change in direction (or as much as it can be given the previous lack of direction regarding the Facebook) but he is not the first member of the government to publicly embrace the site: that was Finance Minister Vuong Dich Hue when told reporters in 2012 that he wanted to engage the public via Facebook. The FT’s Ben Bland suggested it pointed to a “lack of policy cohesion in Vietnam… and the struggle that the Communist Party faces to adapt to life in the twenty-first century.”

But what has prompted the PM’s public speech to officials, which has been reported by local media? Largely, it seems, the avid speculation surrounding the illness of former mayor of Danang and anti-corruption official Nguyen Ba Thanh. The question posed by gossip and mystery blogs was: was his purported illness and overseas travel for its treatment because he was poisoned with radioactive material by a political rival whilst in China? These blogs of unverified information are an alternative to the varied newspapers that the government oversees. Whilst there are measures of press freedom at times many stories are still censored or ignored and the public is weary of the state’s one-note reporting of only certain issues.

The PM’s statements shouldn’t be taken as a sign of an increasingly free Vietnam, but simply of an out-of-date government realising years too late it needs to better manage its messages.

For a more exhaustive look at internet freedoms in Vietnam look here: http://www.indexoncensorship.org/2014/02/vietnam-internet-attack/