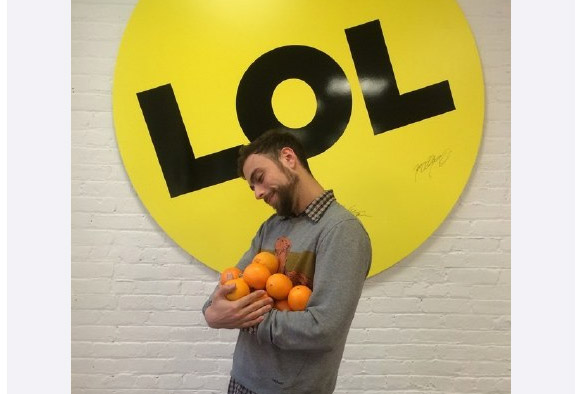 What good can come of being a victim of theft? For Matt Stopera, such unfortunate circumstances have led to him becoming known by a swath of Chinese netizens in what has become a bizarre, and highly entertaining, intercontinental social media exchange.

According to a Shanghaiist article, the saga started last year when Stopera, an American living in New York, left a bar in the East Village, only to find that his iPhone had been taken. After buying a replacement cell, and thinking little more of the incident, he later opened the photos on his new mobile, and was shocked by what he found.

His new phone featured an Asian man’s selfies, with an orange tree in the background. More of the mysterious Far East stranger’s photos appeared on Stopera’s phone— images of fireworks, elaborate Chinese dishes, and Avril Lavigne JPEGs— and before long Stopera learned what had happened. His stolen phone had winded up in the PRC, thanks to a vast underground network of buyers and sellers, which allowed shady sellers to sell the cell to man in Meizhou, Guangdong province. When this new owner began uploading photos on his phone, Stopera’s iCloud account synchronised the images onto his new phone, allowing both users to see the images, and connecting them even though they were half a world apart.

Stopera wrote about the surreal events in a popular BuzzFeed post, which was promptly translated by a Chinese netizen and reposted on social networks in the PRC. The owner of Stopera’s new phone was dubbed “Orange Brother,” and netizens became increasingly charmed by the tale of these “long lost” international brethren. Orange Brother’s nephew came across the post and informed his uncle, then reached out to Stopera with the following post:

@mattstopera hi Matt !!!Bro Orange is reading your message now, although it’s hard for him to understand English!!

Those following the exchange encouraged Stopera to visit China and meet his former phone’s new owner in person. Orange Brother concurred, making a video in which he invited Stopera to come and chow down on some authentic Meizhou cusine. The former theft victim is now attempting to do just that:

@不卖橘子的橘子哥! I won’t be able to make it by March 5 because I can’t get a Chinese entry visa by then  Is there another time later in the month that I could visit? I am so excited!

And it looks like the meeting is on. Stopera tweeted that the two will meet in China on March 18:

60 million people have read about my stolen phone, Weibo is my life, and I am meeting Bro Orange on March 18: http://t.co/rQSfox12tc