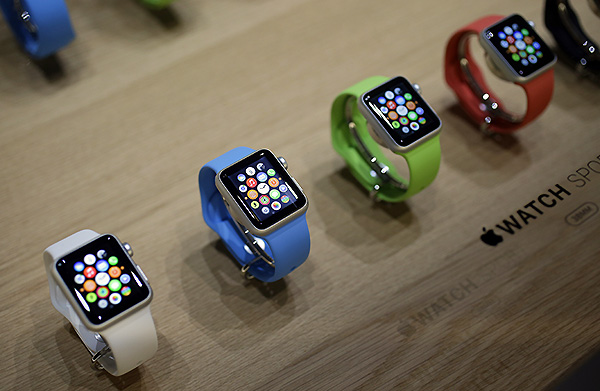 Varieties of the new Apple Watch are display after an Apple event on Monday. Pic: AP.

Singapore has 4th most iPhone users, so why no Apple Watch debut?

Varieties of the new Apple Watch are display after an Apple event on Monday. Pic: AP.

Apple fans in Singapore, among who are 2 million iPhone users, have naturally been disappointed to hear that their beloved sunny island wasn’t included in the Apple Watch debut.

Countries that will get the much anticipated wearable on April 24 include Australia, Britain, Canada, China, France, Germany, Hong Kong, Japan, and the United States.

Of these countries, only Australia, the United States and Canada have a higher percentage of iPhone users. Singapore trails behind in fourth place with 37% of its population owning one of Apple’s smartphones.

Since the Apple Watch requires an iPhone to function, one would think that picking the iPhone-loving city-state for its debut would be a no-brainer. So why wasn’t Singapore picked?

Apple hasn’t released an official statement explaining why, which is not unusual. The tech giant is well known for its secrecy and it typically doesn’t bother to explain launch decisions like these.

Nonetheless, I decided to contact our local Apple office for comment. I asked if they could shed some light on why Singapore wasn’t included in the initial release and whether it had anything to do with Singaporeans’ resistance to wearable tech.

Unsurprisingly, I got the tersely worded “no comment” response:

We have no further details beyond those announced today.

Should any additional information come to hand, we will update you.

To be sure, this is nothing new for us. Singapore wasn’t included in the initial release of previous iPhones, from 1 to 5. Back then, diehard fans had to import them from overseas.

But the release of the iPhone 6 and iPhone 6 Plus bucked the trend. Singaporeans could get the latest iPhones on September 19, 2014, together with Australia, Britain, Canada, France, Germany, Hong Kong, Japan, and the United States. China only got theirs one month after the initial release.

This time though, China won’t have to wait for the Apple Watch, but Singapore will.

So why the reversal? How did China make it onto the list while Singapore got removed? How did we go back to being just another small blip on Apple’s radar?

Perhaps it’s because the smart-wristwatch market is uncharted territory for Apple and it’s trying to be cautious. But if that’s the case, why pick Hong Kong but not Singapore? If anything, Singapore’s the perfect place to test out new tech products.

Singapore and Hong Kong tend to be, from an electronics perspective, leading indicators on what is going to be hot in Western Europe and North America, as well as what is going to take off in the region.

Singapore has a diverse population that would be perfect for market analysts. Want to see different income groups respond to the Apple Watch? We’ve got everything from the super-rich to the tragically impoverished. And if, as the government claims, families with a S$1,000 (US$720) monthly income can afford an HDB flat, surely they can afford an over-priced watch too.

In all, there are so many races here there’s probably one for every nerd in the Cupertino magic factory. This is also what makes Singapore such a great place for clinical trials, so why not test out novel wearables here too?

When it comes to wearables that can monitor your heart rate, track your every movement and even listen in on your conversations, privacy and security are at the top of the list of concerns that consumers have. According to a survey by PricewaterhouseCoopers in 2014:

82 percent of respondents were worried that wearable technology would invade their privacy and 86 percent expressed concern that wearables would make them more vulnerable to security breaches.

In fact, one of the Apple Watch’s features is a “take a minute to stand up” reminder that may save your life but will certainly leave consumers wondering — just how much does my watch know about me?

But compared to Americans, who have already started asking questions about what kind of data the Apple Watch will collect and store, Singaporeans are far less concerned about privacy issues. After all, we’re already used to having very little privacy.

Most of us live in cramped HDB flats, travel to school or work in sardine cans (which people in other countries call the bus or the train), and we barely even notice when the government installs police cameras all over our public housing estates and carparks.

Additionally, two of our major Internet Service Providers, Singtel and StarHub, are state-owned (or more specifically, owned by our sovereign wealth fund, Temasek Holdings), but most of us don’t make a big issue out of it.

As such, it’s puzzling that Apple doesn’t consider Singapore the perfect market to show off the potential of the Apple Watch to its shareholders.

Watches do more than tell time, they act as markers of social status. As Jack Smith from Observer puts it:

If you are a self-respecting dresser who understands what a watch means as a prestige item, this is exactly what you should pay [US$350] for a watch. If you have ever been measured for a pair of bespoke jeans or drink only pour-over coffee, please hold your objections.

I concede my ignorance of opulent fashions, but I think the Apple Watch does look pretty sleek. Whatever you may think of it, Apple has gone to great lengths to break into the market for wristwatches, even hiring fashion industry experts such as Marc Newson to make sure they get things right the first time.

This explains why China was included in the initial release, but not why Hong Kong was also included; and it also doesn’t explain why Singapore was excluded.

Euromonitor International forecasts an increase in the sale of luxury goods in China and Singapore, but not in Hong Kong.

Maybe branding has a part to play here. Compared to Hong Kong — the subject of a lot of media attention lately, particularly because of the Umbrella Revolution — Singapore is somewhat less well known.

Just as luxury brands price their products out of the reach of common consumers to maintain exclusivity, Apple may be trying to do the same with the Apple Watch by leaving Singapore out.

The logic goes like this: Let’s not include Singapore lest people think we’re lowering our standards. Who cares if it’s an excellent market, it’s what people think about it that matters; and given that people haven’t even heard of Singapore, they’ll probably just think of it as some postcolonial backwater. We definitely don’t want people thinking that they’ll be adorning their wrist with the same thing a bunch of slum dwellers slap onto theirs. That certainly won’t be good for business.

But that’s only a theory. The truth is: Tim Cook’s just as much of a mystery as Steve Jobs. Maybe he wasn’t happy with the font our government uses on its website. Or maybe he didn’t like how the Straits Times keeps capitalising the G in government.