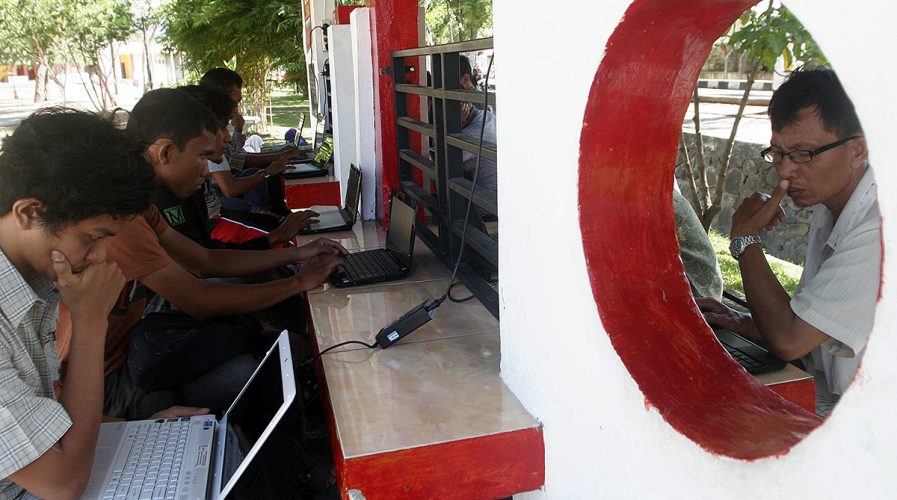 In this Friday, Aug. 5, 2011, photo, Acehnese browse Internet using free Wi-Fi access at a park in Banda Aceh, Aceh province, Indonesia. Venture capitalists from Silicon Valley to New York all have the same question about Indonesia’s come-from-nowhere tech frenzy: Are the young entrepreneurs that have piqued their interest, smart bets or just surfing a hype that will soon burn out. (AP Photo/Heri Juanda)

INDONESIA is currently facing a shortage of skills and talent that threatens to impede the growth of its promising technology industry.

According to Reuters, Indonesia is poised to take large portion of the potential US$200 billion internet economy in Southeast Asia, a region that will need to attract US$40-50 billion in sectors such as e-commence over the next 10 years to reach the figure – referring to a report by Google and Singaporean state fund Temasek.

The recruitment of talented executives is said to be a major hurdle in Indonesia even as internet giants like Alibaba and SoftBank are making major investments in startups that were linked to the country.

The scarcity stems from the republic’s education system, lack of experience and lower wages compared to more developed countries such as the United States.

Eka Himawan, group chief financial officer of Indonesia’s online retailer Orami, said the company spent two years looking for a chief technology officer in its struggle to take it business to the ‘next level’.

Eventually, the company discovered Ridy Lie, who had experience working with Amazon in the U.S.

“He is the one who is guiding (the engineers) and telling them: this is how the things are done in Amazon and this is how we should do it,” the news agency quoted Himawan as saying recently.

Among Southeast Asian countries, Indonesia has the lowest ratio highly skilled workers who account for only 10 percent of the 250 million population, according to the World Economic Forum.

Lie, who worked in a development engineering team at Amazon before joining Orami said hiring the right candidates for such jobs was tough.

“The education system is mismatched – what’s taught in university isn’t much in use at work,” Lie said

To tackle the skills shortage, the government is introducing coding on the public school curriculum and sought the help of foreign investors in knowledge transfers.

Apart from skills shortages, tech investors in the country also faced difficulties sourcing training materials for engineers. Poor logistics and policy flipflops were also among the challenges they faced.

In April, Adrian Vanzyl, CEO of Thailand-based Ardent Capital, told Reuters that there was plenty of capital available, and that Indonesia “is exploding on every possible level”.

“Why are things growing less fast than they can? The answer is talent shortage. That is the number one factor,” Vanzyl said.