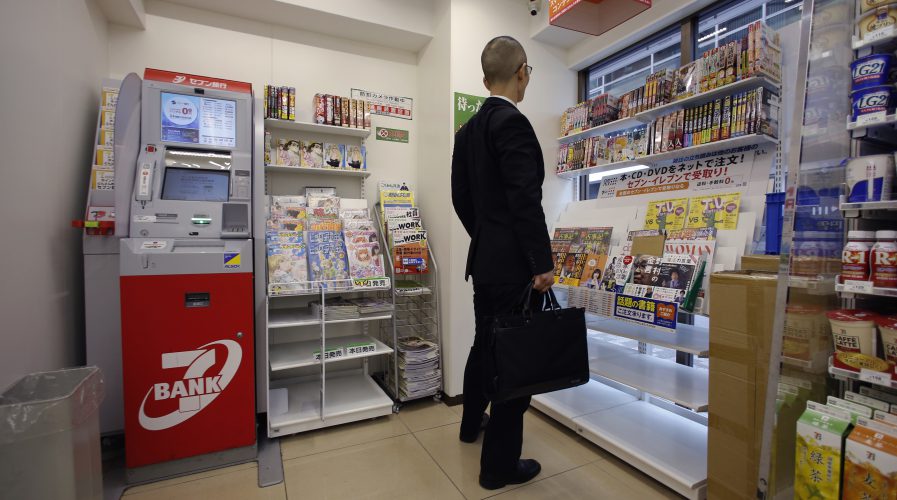 A man looks at magazines near an ATM at a convenience store in Tokyo, Tuesday, June 7, 2016. Japanese banks that lost some 1.8 billion yen ($16.5 million) when fake overseas cards were used at convenience store ATMs are scrambling to combat such fraud. The illegal withdrawals were made in just a few hours on May 15 at more than 1,000 ATMs in 17 prefectures (states), according to Japanese media reports. (AP Photo/Shizuo Kambayashi)

Two banks that operate ATMs in convenience stores are moving to combat such fraud and have now reduced the withdrawal limit for customers using non-Japanese cards.

Japanese media have reported that the illegal withdrawals took place on May 15. The thefts occurred in 17 prefectures.

The reports say fake cards from a South African bank were used, and police have arrested three suspects so far.

Authorities believe the money was withdrawn using fake credit cards with duplicated information that was leaked from a bank in South Africa.

Police estimate at least 100 people were involved in coordinating the high-tech robbery.

The bank said it was a “victim of a sophisticated, coordinated fraud incident”.

“This involved the withdrawal of cash using a small number of fictitious cards at various ATMs in Japan,” it said in a statement, adding customers were assured that they did not suffer any financial losses as a result of the attack.