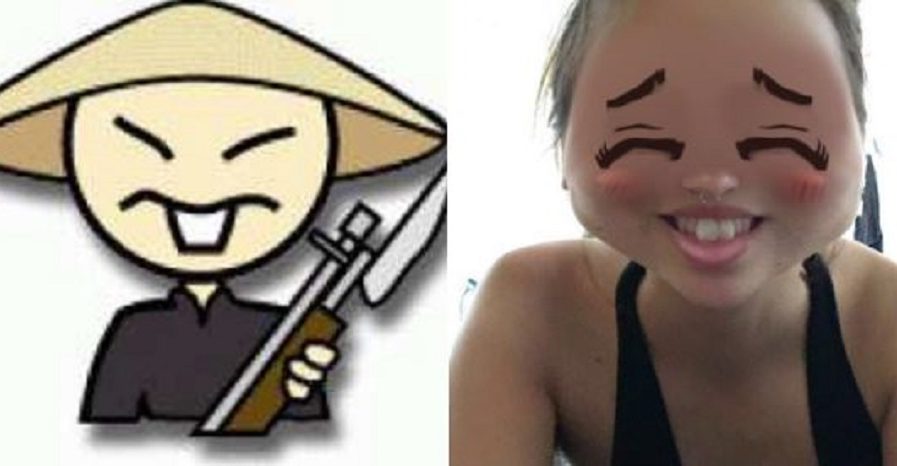 SNAPCHAT is in trouble (again) for releasing (yet another) filter that has been branded by many as being racially insensitive and offensive.

The social platform, popular for its filters that use facial recognition technology, has come under fire for a filter that alters users’ faces to look more “Asian”, with tiny eyes  and buck teeth. Anger over the offensive filter has sparked the hashtag #yellowface in protest.

Snapchat told The Verge that the filter was “inspired by anime” but has since taken it down due to the backlash. They also reportedly said that the “lenses are meant to be playful and never to offend”.

The company’s defense of the filter has not been received well, as it does not resemble much anime at all, which typically features characters with very large, sparkly eyes and other delicate features.

.@Snapchat wanna tell me why u thought this yellowface was ok?? pic.twitter.com/sgpW4AFPsE

In April, Snapchat fended off backlash after releasing a Bob Marley-“inspired” filter to celebrate 4/20 – 20th April is an unofficial day on which cannabis smokers celebrate the drug.

Outrage over the offensive “black face” filter quickly spread, even more so after popular Snapchat users like Kylie Jenner posted videos of themselves using the “racist” lens.

WIRED pointed out that Snapchat’s “yellow face” blunder was particularly short-sighted due to the debate around Asian-targeted racism in the U.S.

Grace Sparapani, whose tweet about the filter is embedded above as @tequilafunrise, told Motherboard that, as unfortunate as it is, “racism on social media isn’t anything new”.

She added that with this filter, Snapchat “formalized” racism and made it “easier”.

However, some have come Snapchat’s defense. Melissa Chen, a U.S.-based Singaporean genome scientist, took to social media to share her view that the filter was not racist.

She said: “We have all been harassed or made fun of for (insert facial feature here)… But if you want to make that a basis for accusing Snapchat of being ‘racist’ then you do realize, we’d also have to remove all the lenses and filters that make you bald or that give you a fat double chin because someone has been made fun of and teased for having those traits.”

Tl;dr version: it's not racist. pic.twitter.com/G26zwmFYHr