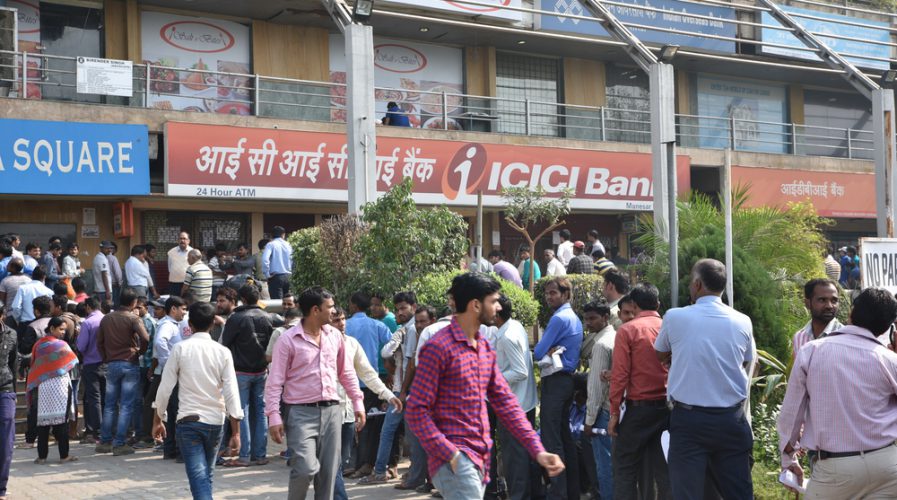 Long queues of people outside banks to deposit old 500 and 1000 currency notes and get new currency. Pic: singh_lens/Shutterstock

How is India dealing with PM Modi’s demonetization move?

IN a surprise move by India’s PM Narendra Modi to stamp out corruption, 86 percent  of India’s total circulated currency was withdrawn – which has left cash in short supply.

As India is a cash-based economy that’s home to 21 percent of the world’s unbanked population, the move to eliminate 500 and 1,000 rupees notes (worth US$7.50 and US$15 respectively), called demonetization, has caused widespread chaos. Some banks have been running out of cash and police were called in to keep queues of anxious customers at ATMs from raging out of control.

Still, currency reform that goes beyond a mere inconvenience provides a golden opportunity for digital payments companies as merchants of all stripes are now desperately seeking new ways to accept payment.

According to Bloomberg, Paytm is one of the many Indian digital payments companies getting a big boost from demonetization. The company, backed by Alibaba’s Ant Financial, is worth US$5 billion at last count and its user base has hit 150 million with daily transactions averaging 7 million since the currency withdrawal.

Paytm offers its merchants zero-transaction fees on mobile payments and it has also rolled out a DIY kit for merchants and hawkers that are new to the digital payments space.

Only 25 million people own credit cards in India, a country of over a billion people, so it’s fair to say that locals do not trust the big banks and need digital payments solutions more than ever. Besides Paytm, other digital payments startups have also reported an uptick in newly enrolled merchants within days. For example, mobile wallet startup MobiKwik, said that “it’s seen a 75-time surge in transactions” within a week’s time.

It’s co-founder Upasana Taku pointed out that the drastic move to “vanquish black money” has been a catalyst to eliminating unwillingness to try out digital payments as an alternative to cash.

“All the reluctance and friction in adoption of digital payments has vanished overnight. We are updating our numbers every day as usage is going through the roof,” he said.

As the ever customizable adage goes, “one man’s loss is another man’s gain”, India recoils from the effects of demonetization and turns to new technology which could bring an outdated economy into the 21st century.