A team of Malaysian youths have come up with a way to reduce food wastage and feed the poor. Image via YouTube.

Feeding the hungry with Robin Food, an app by four Malaysian teens

THE United Nation’s Food and Agriculture Organisation estimates that every year, some 1.3 billion tonnes of food are either lost or wasted, and that’s one-third of the world’s total annual consumption.

If the statistic doesn’t already turn your stomach, here’s another fact that will: The organisation also says that one in nine people (about 795 million of the world’s 7.3 billion populace) were suffering from chronic undernourishment between 2014 and 2016.

But a team of enterprising Malaysian teenagers have come up with a novel way to address the issue, using existing technology and a device that more than one-fifth of the world already use – the smartphone.

Like its name suggests, Robin Food is inspired by the heroic ideal of taking from the rich to feed the poor, as per the famous English folklore “Robin Hood”.

According to its creators – Joseph Chung Ming Chong, 14, Allegra Chan, 16, Ezra Adrian Robert, 15, and Ivan Avannus, 15, – Robin Food enables supermarkets and other corporations like hotels or mini-markets or even generous individuals to donate surplus food stocks to the needy with just a few screen taps.

Interested donors can use the application to inform food banks of the availability of access food at their premises and then arrange for a collection within minutes. Ultimately, it eliminates the tedious task of finding the best organisation to donate to and then seeking ways to get in touch with them, or on the reverse side, it also makes it easier for food banks in search of reliable donors.

The app, bankrolled by Malaysia-based multinational conglomerate Sime Darby Berhad, was the winning entry in this year’s Young Innovators challenge. It was launched on Dec 15 and is available for download in the Klang Valley across the Android and iOS smartphone platforms.

Bridging the gap between rich and poor

Since its launch, Robin Food is already showing the potential to make a large impact in the country.

Tesco Malaysia, the local franchise of one of the largest retailers in the world, has signed on as its main contributor, while renowned non-governmental organisation Food Aid Foundation (FAF) will organise food distribution to other organisations and charities.

The inspiration for this idea, according to Chung who hails from the Tunku Putra School, Kuching, Sarawak, the UN statistic on global food wastage.

“A lot of expired food that is still edible is thrown away by many supermarkets and restaurants,” he tells Asian Correspondent in a recent interview.

According to Chung, in Malaysia, approximately 8,000 tonnes of food are wasted daily, of which 3,000 tonnes are preventable.

“Therefore, we came up with the idea of Robin Food to reduce the food waste by creating a mobile application to connect businesses that discard too much food, and charities that need food to give to the needy.”

“Our idea does not only reduce food wastage and save the environment but also addresses poverty issues by feeding the needy.”

His team mate, Chan, who attends the Lodge International School, in Kuching, Sarawak, says the group conceptualised the app after being tasked by Sime Darby during the Young Innovators Challenge workshop earlier this year to come up with practical innovation skills and creative solutions.

“We chose food because food is fundamental to a human being’s survival, but we (as consumers) also discard excess food, or food nearing expiry, and food considered ‘ugly’, without realising that somewhere, someone is hungry,” she says.

“There’s enough of it to go around and easy to yield to those who need it. All it needed was a bridge to close that gap between those with too much and those with too little.”

She says the team’s initial goal was to create a sustainable way of providing a basic necessity to the needy while at the same time helping the environment. 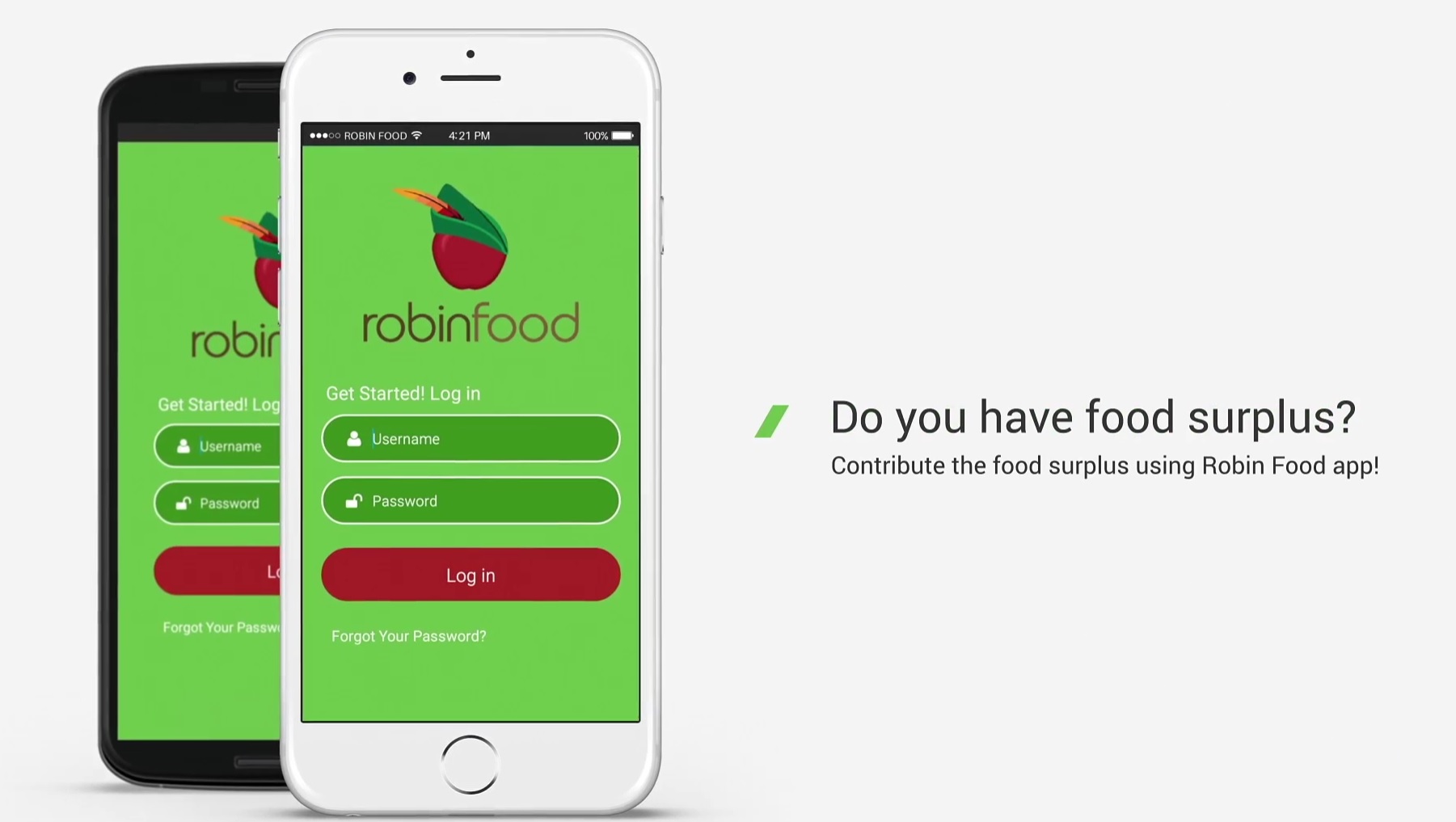 For Ivannus, a student at the St Michael secondary school in Penampang, Sabah, one key contributor to food wastage is the lack of knowledge. He points out that food wastage hardly gets flagged as a problem, adding that, “most of us do not know the consequences of wasting food.”

“I’ve learnt that the world produces enough food to feed 11 billion people, yet, one billion of the global population still goes hungry every night.

“It is these facts and numbers that encouraged us to tackle the issue of food wastage,” says Ivannus, the brains behind the app’s clever name.

Ivannus explains that the premise for “Robin Food” is very similar to “Robin Hood” but has “subtle differences” in that it channels surplus from “corporate giants such as Tesco to give to the poor”.

“I consider myself quite good with these things,” he said in response to how he conjured up the name for the app.

Putting technology to better use

Instead of developing technology to make products or services meant for the rich, Chan feels that it could be put to better use such as helping the needy.

“There isn’t much that technology can’t do these days. People are beginning to realise that it can be put to good use in aiding the needy,” she said.

“The simplest thing it provides is education. You can learn anything online. I think technology ought to be used to teach the needy more about their situation, and how to alleviate it. Helping them to help themselves.”

Another Robin Food team member, Robert, from the All Saints Anglican Academy in Kota Kinabalu, Sabah, says although the team was involved in about 30 percent of the app development from the drawing board phase right up to its launch, the biggest challenge was coming up with an idea that was feasible and easy to use.

“We probably want to make it usable worldwide,” he said, revealling his aspirations for the app to go global.

Sime Darby’s vision for the Robin Food app is to reduce food waste by 2,000 tonnes in Malaysia annually by 2020.

The Young Innovators challenge, an effort funded by the Sime Darby Foundation, the company’s philanthropic arm, had called for students between the age of 13 years old and 16 years old to collaborate and discover innovative, creative and actionable solutions to address issues or problems associated with the theme “People, Planet and Prosperity.”

Shortlisted applicants were invited to participate in regional camps held in the states of Malacca, Penang, Negeri Sembilan and Sabah. Participants were accompanied by Innovation Officers from Sime Darby who coached the students in design thinking to come up with ideas for their pitch.

Regional winners were awarded cash prizes and the first prize winners from each region were invited to attend a five-day national workshop where participants were coached in advanced design thinking, co-creation and collaboration of ideas, public speaking, pitching of ideas and techniques of prototyping and visualisation.

A total of four teams made it to the final presentation pitch to a panel of judges, held at the Sime Darby Convention Centre in June 2016, where the Robin Food team was crowned the winner.

The Robin Food team leveraged fully on design thinking, a module that was integrated and taught deeply throughout the SDYIC camp to really work on a solution that would be applicable and relevant, which was an app to reduce food wastage by bridging communities such as charity homes and NGOs with food sources such as supermarkets.

The team won a trophy, RM10,000 and a Macbook Air each. Their idea was then incubated by the Innovation team in Sime Darby Group Strategy and Innovation.

Apart from large companies, who else can use the app?

Sime Darby says the app is free to use but would only be available to registered users. Those eligible to sign up for Robin Food are manufacturers, retailers, food operators, hotels, cafes, and restaurants, wholesalers, distributors, importers and hypermarkets.

Individual contributions can be channeled directly to Food Aid Foundation, while those keen on obtaining information of the app and programme can visit http://www.myrobinfood.org/.

While the app can only be downloaded at the Google Playstore for Android phones, the iOS version will be available in January 2017.

** This article first appeared in our sister publication Asian Correspondent