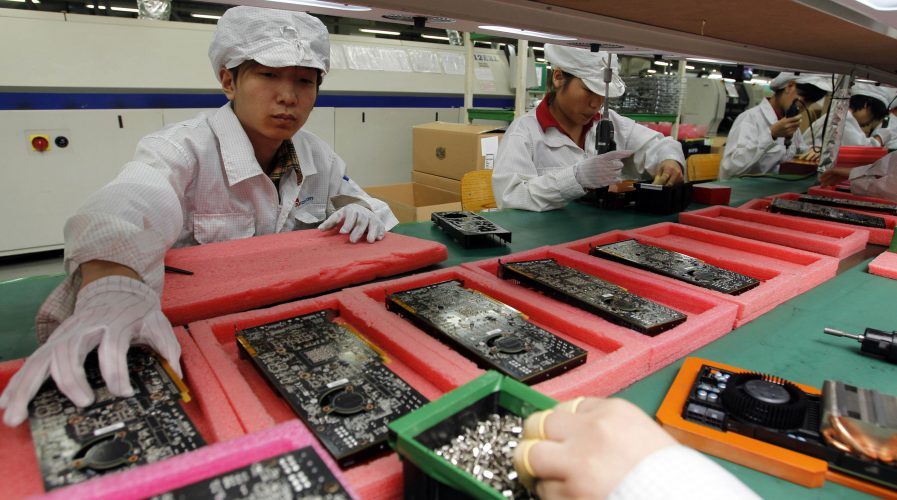 (File) Staff members work on the production line at the Foxconn complex in the southern Chinese city of Shenzhen. Pic: AP.

Does Shenzhen fear Trump’s plan to have US-made iPhones? Not so much

Last week, we reported that Apple might be pandering to President-elect Donald Trump’s request to move manufacturing back to the US. Apple had reportedly asked its two key iPhone assemblers, Pegatron and Foxconn, to look into the costs and logistics of making the smartphones in the US.

The Wall Street Journal pointed out that Trump’s quest to bring jobs back to the US might strike fear in the heart of Shenzhen, a once sleepy village-turned-global manufacturing hub just north of Hong Kong. According to interviews done with executives of top tech firms in the Chinese city, Trump is not the one they’re worried about – as they believe that the “economic forces” driving Shenzhen’s growth is “too massive to be rolled back.”

After all, even if Trump makes good on his promise to put tariffs on goods made in China, it is still far more cost efficient for firms to engineer, produce and ship products from Shenzhen instead of the US. According to the chairman of Foxconn, moving iPhone manufacturing to the US would double costs for Apple.

What the execs are truly concerned about are the same winds of change, brought about by globalisation, that diminished manufacturing jobs in the US and moved them to Shenzhen. As cost of living and wages rise in China, some of Shenzhen’s factories and other consumer-electronics firms are moving to lower-cost countries in Southeast Asia such as Vietnam.

For example, Samsung is one consumer electronics maker that invests heavily in Vietnam, making more than one-third of its phones there today. And it goes without saying that the robot revolution will save factory owners a lot of cash and it’s sure to chip off more jobs.

Trump Meets With Apple CEO After Campaign Attacks: Could Trump get Apple products made in US? #TrumpsApple https://t.co/EdAtWY26WL

Still, Shenzhen’s global competitiveness is a force to be reckoned with as it has a unique combination of resources: University-trained engineers, access to electronics parts at a low cost and experienced product prototypers that can produce mock-ups at a fraction of the time and cost as in the US.

At the same time, as we covered earlier this month, Vietnam is a rising hub for technical talent which has been attracting global consumer electronics firms such as Samsung and LG. As the Southeast Asian country continues to develop at warp speed, not unlike the way that Shenzhen has grown, it may become a serious manufacturing contender in the future.