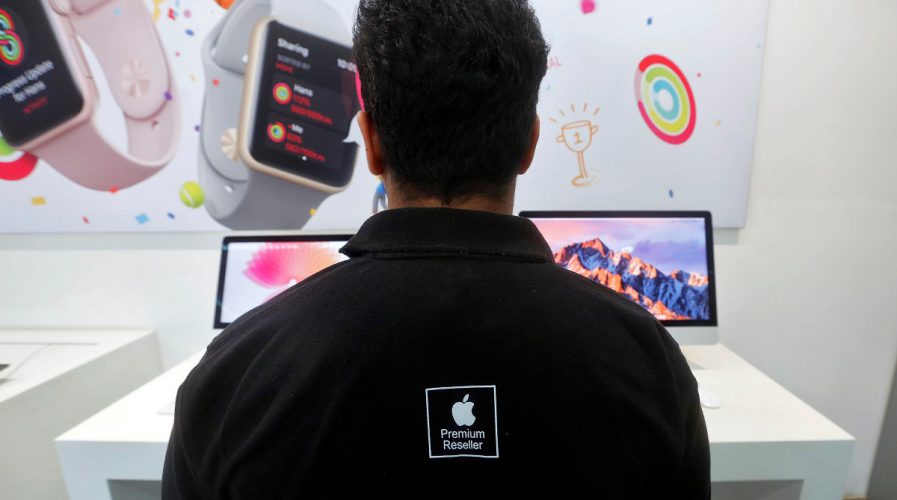 A salesperson waits for customers at an Apple reseller store in Mumbai. Pic: Reuters

Indian government wants Apple, but not all officials are biting

SOME Indian officials have balked at Apple’s demands for concessions before it assembles iPhones there, raising doubts about a spring deadline to launch a key project in Prime Minister Narendra Modi’s campaign to lure foreign investors.

The country is still keen for the U.S. tech giant to produce its signature smartphones there, and Information Technology Minister Ravi Shankar Prasad said on Wednesday that India would keep an “open mind” in negotiations.

“We will very much like Apple to come and have a base in India,” he said.

But Apple Inc.’s long list of demands, including tax concessions and several other policy exceptions, still faces resistance from officials who consider it excessive and unfair on foreign companies already operating in India.

Their caution underlines how Modi’s ambition to make India a global manufacturing hub, in order to drive the economy and create jobs for millions of people entering the workforce each year, will not be easy.

“We have not done this for anyone,” said a senior government official whose department is one of several involved in evaluating the Apple proposal. “If we do this, we must see a lot of value addition.”

Another official involved in the review said the government should make policies for the industry, not individual companies.

“Apple is coming here because it sees a lucrative market, this is not a favor being done to India.”

Competitors such as South Korea’s Samsung Electronics and China’s Xiaomi have already set up manufacturing in the country.

Apple did not respond to a request for comment.

Where any plant would be located and how many people it might employ have yet to be finalized, although it would likely involve thousands of jobs.

Attracting such a household name would be a valuable advertisement for a country shaking off a reputation for stifling bureaucracy, but officials are wary of tailoring rules to individual investors.

“What Apple is trying to do, if it happens, I think it will be available to everybody in the industry. I don’t see the government of India making discriminatory policies,” said Arvind Vohra, chief executive at Gionee India, part of Chinese smartphone maker Gionee.

It is setting up a local manufacturing plant under India’s existing rules.

From Apple’s point of view, the ambitious timeline agreed by Modi and Cook reflected its need to capture more of the fast-growing Indian market, where it has only about 2 percent share as iPhone sales in the United State and China have slowed.

In a letter sent to the prime minister’s office on Oct. 13 and seen by Reuters, it called on the government to “make the environment attractive” for it to make phones for the Indian market as well as for export.

On the matter of duties, it said high import taxes on smartphones could lead to retaliation from trading blocs.

“This would increase the cost of India manufactured smartphones and in turn limit India’s ambition of becoming a smartphone hub for the rest of the world.”

Despite the reluctance of some officials, Modi could intervene to get the Apple project back on schedule.

In June, the government relaxed local sourcing rules for foreign retailers like Apple barely a month after the finance ministry turned down the company’s request for a waiver.

The company and its partners have reportedly won significant concessions before in other markets.

On Jan. 25, the departments of industry, information technology and electronics, and finance will meet Apple executives to consider the conditions set out by the firm in India, government officials said.

In May, Modi and Cook agreed to work towards a “package” of four projects: assembling iPhones, opening Apple stores, importing certified pre-owned iPhones and refurbishing them in India, according to the letter.

Apple said its initial focus was to set up manufacturing of iPhones in India over two phases, the first of which was to be introduced by spring this year.

But after conducting due diligence on what it would take to get the project going, it determined its entry was “dependent on government support on a number of pre-requisites”.

The Cupertino, Calif.-based company listed a set of seven demands. Among them, it sought duty exemption on raw materials for manufacturing, components and capital equipment for 15 years for both domestic and export markets.

Apple also sought a change in rules that would govern how it could import defective iPhones to repair and export them again, a move it said was crucial for it to keep supporting and repairing older models of the iPhone.

Currently, Indian rules restrict such imports to phones that are no older than three years.

SEE ALSO: Internet users to hit 730m in India by 2020 driven by rural adopters and smartphones

Apple asked for the government’s help in quickly processing a request for a ruling from Indian tax authorities on transfer pricing agreements between its affiliates.

It also identified India’s customs procedures as a hurdle to manufacturing and asked the government to make them less onerous.