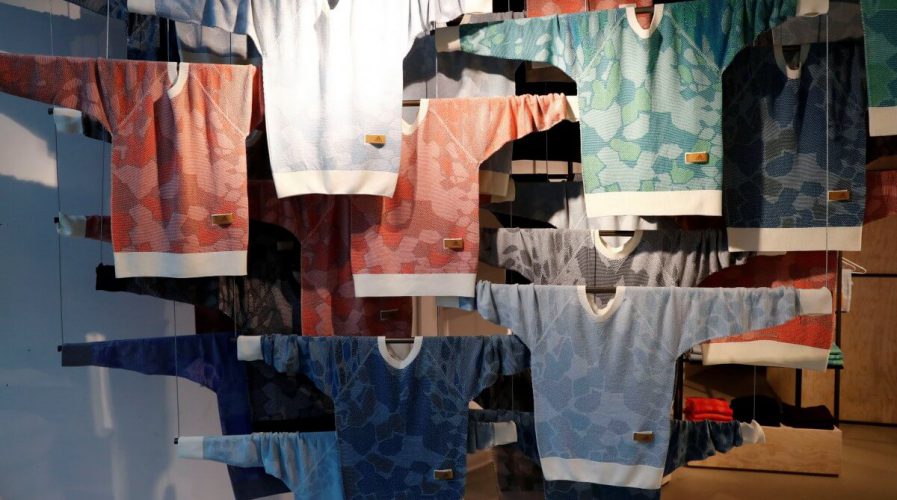 Sweaters are pictured at the Adidas Knit for You store in Berlin, Germany. Source: Reuters.

Is Adidas’ tech venture a leading signal for the future of sustainable fast fashion?

ADIDAS is envisioning a brand new way of adapting to the fickle trends of the fast fashion industry – the company has been trying out an in-store technology to knit customized 200 euro (US$215) sweaters for customers within the day in order to tap into fast fashion with a personal twist.

The technology has been implemented in a pop-up store in a Berlin mall, and allowed customers to customize their own merino wool sweater according to their desires.

The in-store machine scans the customer’s body to produce the right fit and size unique to each person. Customers would then choose a design from a range of possible options and then experiment with different color combinations. Once they had made their choices, the machine would knit the sweater in situ, and then the sweater is finished by hand, washed and dried before being collected by the customer.

This new venture is part of a plan to drive up the company’s operating margins to levels on par with rival Nike by 2020. The group is experimenting with strategies to cut short the delivery times of new designs down to 12 to 18 months.

It is a strategy which has worked in the sneaker industry, but now the “Knit for You” campaign aims to add individuality into the mix, aspect often lost in ready-made products.

But speed still lies at the heart of Adidas’s game plan. The sportswear company is aiming for 50 percent of its products to be made in a faster time frame by 2020 – double the rate it produced products in 2016 – which they expect will allow them to boost the products they sell at full price by 70 percent.

And they aren’t the only ones who are banking on speed to top their competition – Japanese basic wear giant, Uniqlo, are also hoping pushing for higher production rates and supplying their stores faster will help it usurp the fast fashion crown from Inditex’s Zara, who reported US$25 billion worth of sales in 2016.

“We need to be fast,” Uniqlo founder Tadashi Yanai was quoted saying in an interview with Bloomberg. “We need to deliver products customers want quickly.”

Like Adidas, Uniqlo is trying to leverage technology to launch forward fast.

The company’s Ariake facility along Tokyo’s waterfront brings together marketing and design teams to streamline the operations, an outfit Uniqlo’s owner, Fast Retailing, wants to replicate in more locations. The hope is that much of the company’s operations can be slowly automated and artificial intelligence can be increasingly used to predict sales patterns.

The goal to ultimately unseat Zara might be a bit of a stretch for Fast Retailing who aims for US$26 billion by 2021, but Yanai believes Uniqlo’s focus on everyday clothing that keeps fashion forwardness and practicality in mind is a recipe for success.

Uniqlo’s no-frills approach to fashion requires less production time in general and the company could focus on upping the quality of the designs.

“Zara sells fashion rather than catering to customers’ needs,” Yanai said. “We will sell products that are rooted in people’s day-to-day lives, and we do so based on what we hear from customers.”

Adidas and Uniqlo might be tapping into an industry that is already facing its twilight days.

Once the machine that drove the fashion industry, fast fashion is a term coined to describe clothes emulating catwalk trends that are quickly replicated for mass production, resulting in “micro seasons” and low wages for garment workers in some of the poorest countries in the world.

Fast fashion retailers such as Zara and H&M would churn out fresh pieces that would be rolled into stores on a weekly basis. Their rise crippled retailers that typically worked on a season-by-season basis, and relied heavily on brick-and-mortar stores to sell their clothes.

Fast fashion retailers harnessed the rise of e-commerce to peddle their wares online, spending less on advertising and relying on web analytics to chart consumer habits. 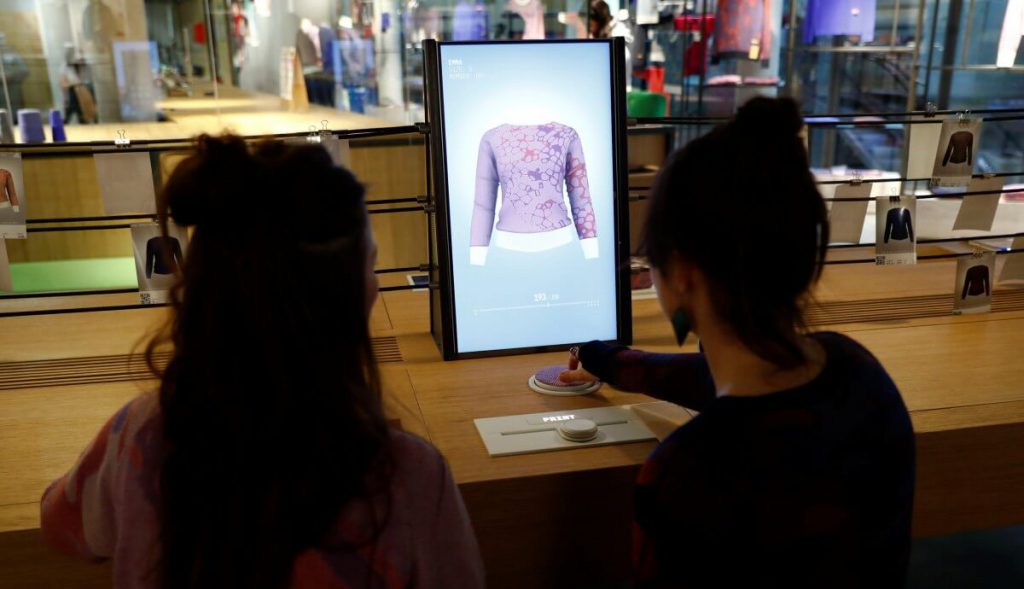 Staff members proceed with the measuring process on a computer to order a knitting pattern at the Adidas Knit for You store in Berlin, Germany. Source: Reuters.

“If you are a fashion apparel retailer, you have to have a steady flow of newness,” Customer Growth Partners president Craig Johnson said. “You can’t just regurgitate what was hot last year.”

But that all seems to be changing.

The changing fortunes of the two companies have two implications: Firstly, consumer habits are changing. Large scale campaigns by activists and marketing efforts by retailers have resulted in greater awareness of the side effects of fast fashion – most notably highlighted by the devastating Rana Plaza factory collapse in 2013.

The change in sales numbers indicates more and more people are spending a smaller chunk of their disposable income on clothing, and are instead diverting those resources to other areas, such as electronics or travel. LA Times reports less than four percent of every dollar is now spent on apparel compared to the eight percent that was spent in the mid-90s.

Secondly, apparel companies are now finding their margins under siege from rising production costs as the quality of living in once-poor manufacturing companies – such as Vietnam and India – and the cost of materials increase.

Fast fashion no longer appears to be the huge money-making machine it once was, and retailers are now turning to new strategies to captivate buyers.

Value fashion on the rise

The emergence of Adidas “Knit for You” campaign speaks to the broader question of the change fashion is experiencing; clothes tailored to the individual is beginning to matter more.

The sweater campaign’s focus on customization indicates exclusivity is far more important than the ability to buy the same shirt in six different colors for a few dollars.

“It is very individual. It is like knitting your own sweater,” Adidas customer Christina Sharif told Reuters, adding she ordered shorter arms on her electric blue sweater than the standard model. 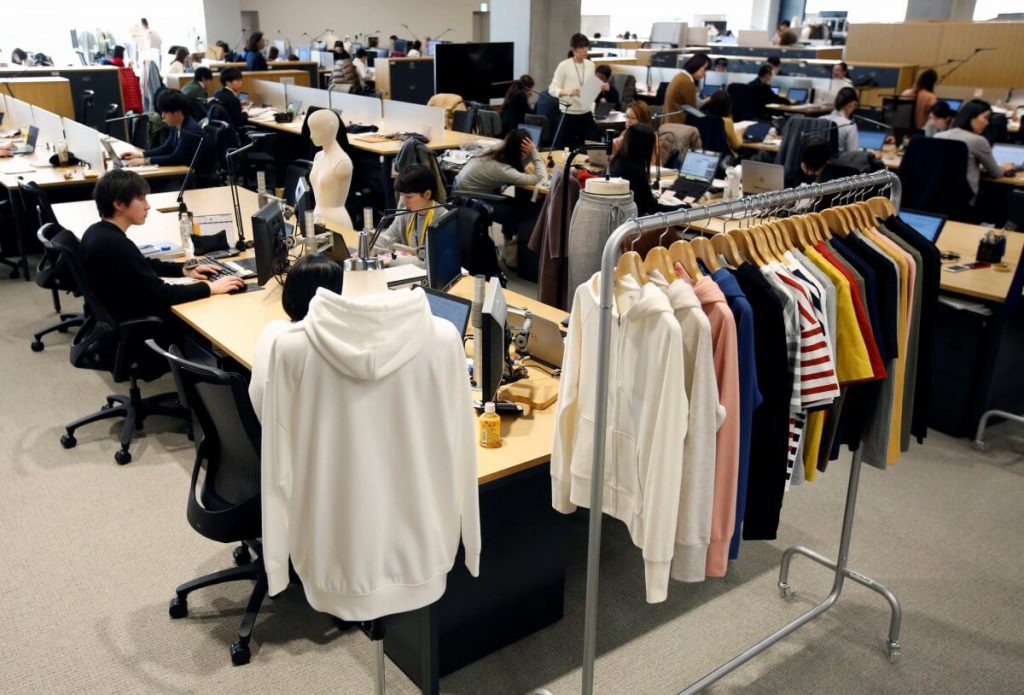 Despite the speed it aims to achieve, Adidas and Uniqlo are recreating the meaning of “fast fashion” into one that leverages technology to improve efficiency rather than sacrifices resources and engages obsolescence.

Uniqlo has maintained its commitment to the culture of normcore everyday wear, but expanded its range to include limited edition art-as-fashion pieces.

It engaged top-line designers such as Christopher Lemaire, supermodel Ines de la Fressange and New York’s Museum of Modern Art to produce lines that gave its everyday wear a fashionable and enduring twist.

It is a sign the company understands the power of fashion as an identifier and is moving into what Lemaire calls “slow fast fashion” – affordable (though pricier than Uniqlo’s main line) and accessible, with a know-it-when-you-see-it specialness

“People have been realizing [fast fashion] no longer can go on the way it used to – overconsumerism and overproduction are a disaster,” Lemaire says.

“You just need a good pair of pants. If you find a good pair, you don’t have to change every six months.”