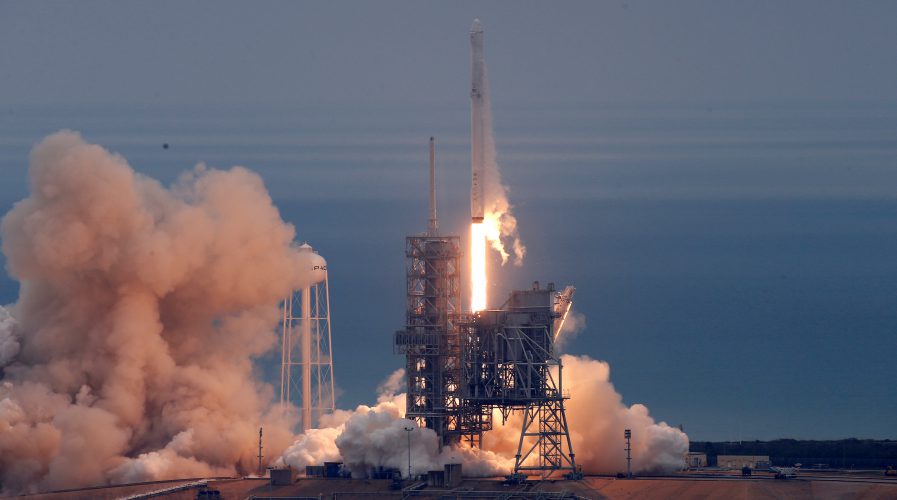 A SpaceX Falcon 9 rocket lifts off to the International Space Station at the Kennedy Space Centre in Cape Canaveral, Florida, U.S., on Feb 19, 2017. Source: Reuters

Space travel is about to get a lot more accessible thanks to SpaceX.

The company, according to a blog post, was approached by two private citizens who had “paid a significant deposit” towards a 2018 moon mission.

The two passengers, who apparently know each other, are “very serious” about the one-week trip which would allow them to board the Crew Dragon spacecraft, skim the Moon’s surface, head out into deep space and loop back to Earth.

The post points out, later in 2017, the passengers will undergo health and fitness tests as well as initial training for their mission.

While SpaceX CEO Elon Musk hasn’t specified how much the trip will cost, the Verge reports it is “comparable” to a crewed mission to the International Space Station. A ticket on the Russian Soyuz rocket is priced at US$80 million.

At first glance, sending affluent citizens on moon missions may seem to distract from SpaceX’s long term goals of interplanetary transport and Mars colonisation, but now knowing the price tag, it’s clear there is a lot of money to be made.

Musk admits private missions could be “a significant driver of revenue” for the company and two trips a year could make up for 20 per cent of its annual revenue.

Although SpaceX has never been one to meet its overly-optimistic deadlines, Musk seems to be confident the mission will happen in 2018.

“Next year is going to be the big year for carrying people. This should be a really exciting mission which hopefully gets the world really excited about sending people into deep space again,” he said.

The Verge points out as there are no current government regulations designed to keep non-astronauts safe during commercial space travel, this could be a new development fraught with liability issues.

Up until this point, most commercial spacecraft missions have been without a crew.

Now that an aerospace manufacturer has sparked the conversation, however, change is likely underfoot and the Federal Aviation Administration has expressed their interest in updating regulation for commercial spaceflights in the coming days.