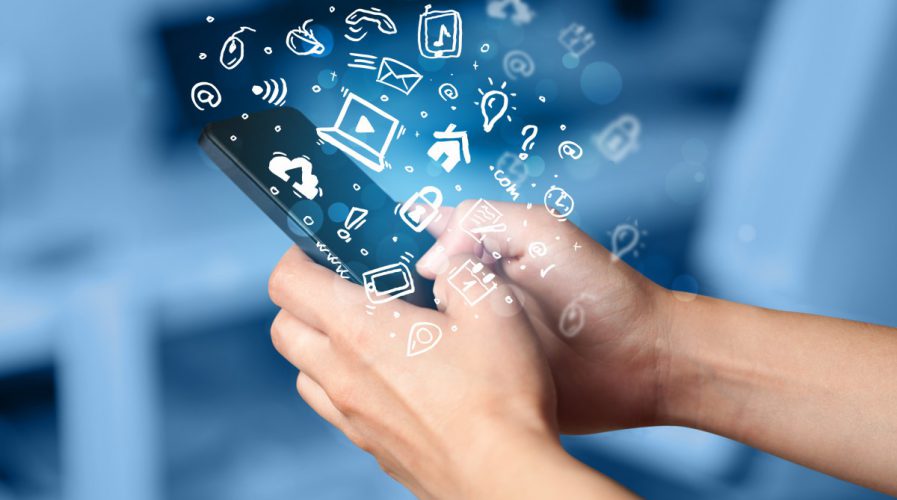 On average, over 50 percent of respondents to the AIR report rank smart devices on par with nourishment and breathing. Source: Shutterstock

Phones over pants: Apps now as important as breathing – report

ACCORDING to a new study by A10 Networks, work and personal apps have taken central stage for people all over the world, with physical and emotional discomfort arising from the lack of our personal devices. The report, called the Application Intelligence Report (AIR), notes many people have ranked the possession of their mobile devices on par with basic, everyday needs like breathing and eating.

I'm addicted to my phone. You probably are too. This team of neuroscientists is on a quest to help us. https://t.co/7AWcHOOEv5

Out of more than 20,000 respondents, 46 percent said they would rather toss their pants than their smart devices. South Koreans came out on top with 61 percent saying public nudity was preferable to the loss of connectivity. In comparison, only 55 percent of Singaporeans agreed with the statement, while 34 percent of Germans disagreed.

The AIR report surveyed more IT and business professionals from a wide variety of industries in markets that are some of the largest and technologically forward economies in the world, such as Brazil, China, Singapore, South Korea, Japan, the United Kingdom and the United States. 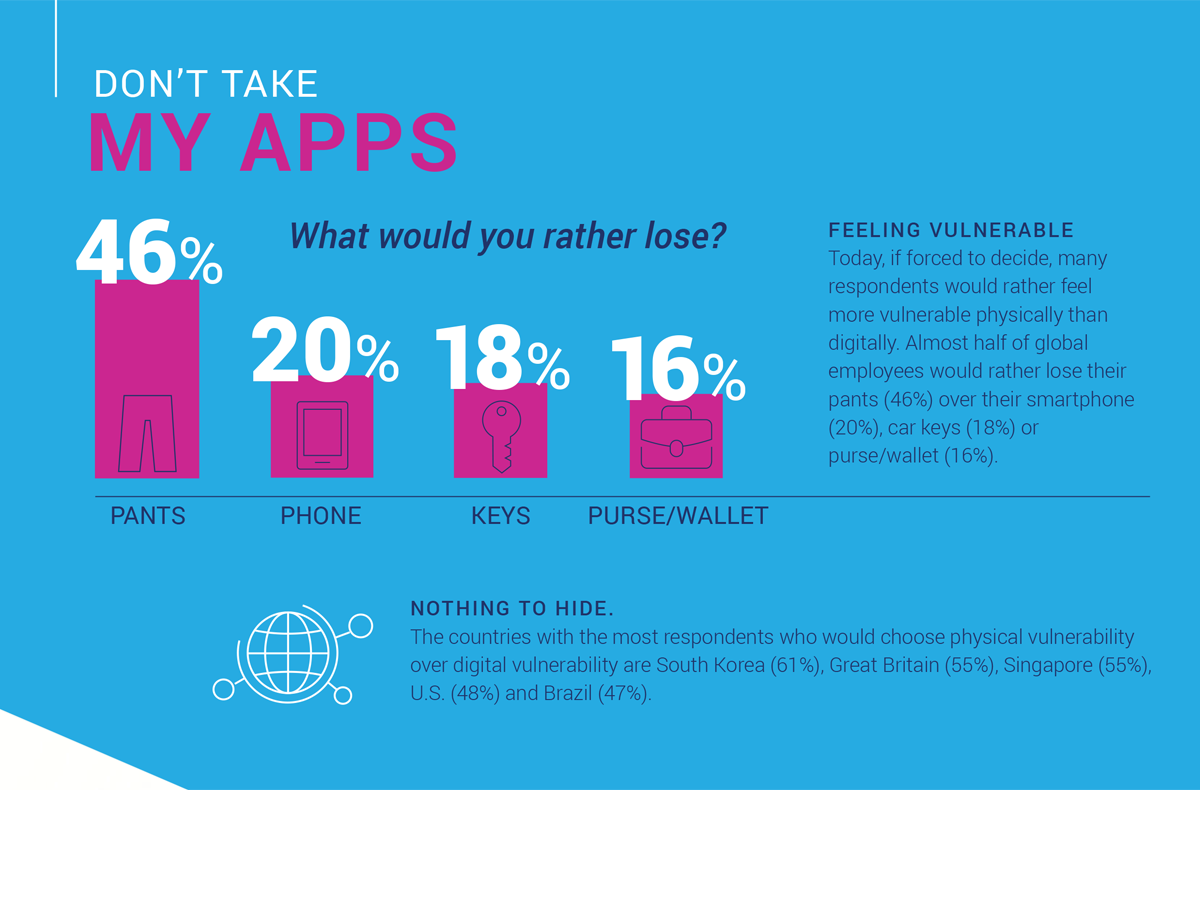 Unlike many reports that take a more numerical approach to studying technology’s effects, A10 Networks designed their report to explore the cultural side of the digital revolution. Their report reveals more people today are living “blended lives”, where we are now performing the majority of our work in the liminal spaces of the Internet – whether it’s on the commute between work and home, or at the intersection of our businesses and personal lives.

In particular, AIR looks at how integrated apps have become in our lives. Half of the global responses considered apps to be a life necessity, with Indian and South Korean respondents exceeding the global average at around 68 percent on average. Further down south, 47 percent of Singaporeans agreed with the aforementioned sentiment.

Others are less convinced of their addiction though: Chinese, Japanese, South Koreans and Singaporeans all think though apps are now central to their lives, they “could manage” without as well.

However, AIR makes it clear though a side effect of such blended lives is that we are increasingly vulnerable to malware attacks, largely due to insufficient security. Only 11 percent of respondents said they had never changed the passwords on mobile apps, with the Germans coming out on top as the most prudent (34 percent said they used different passwords for different apps). 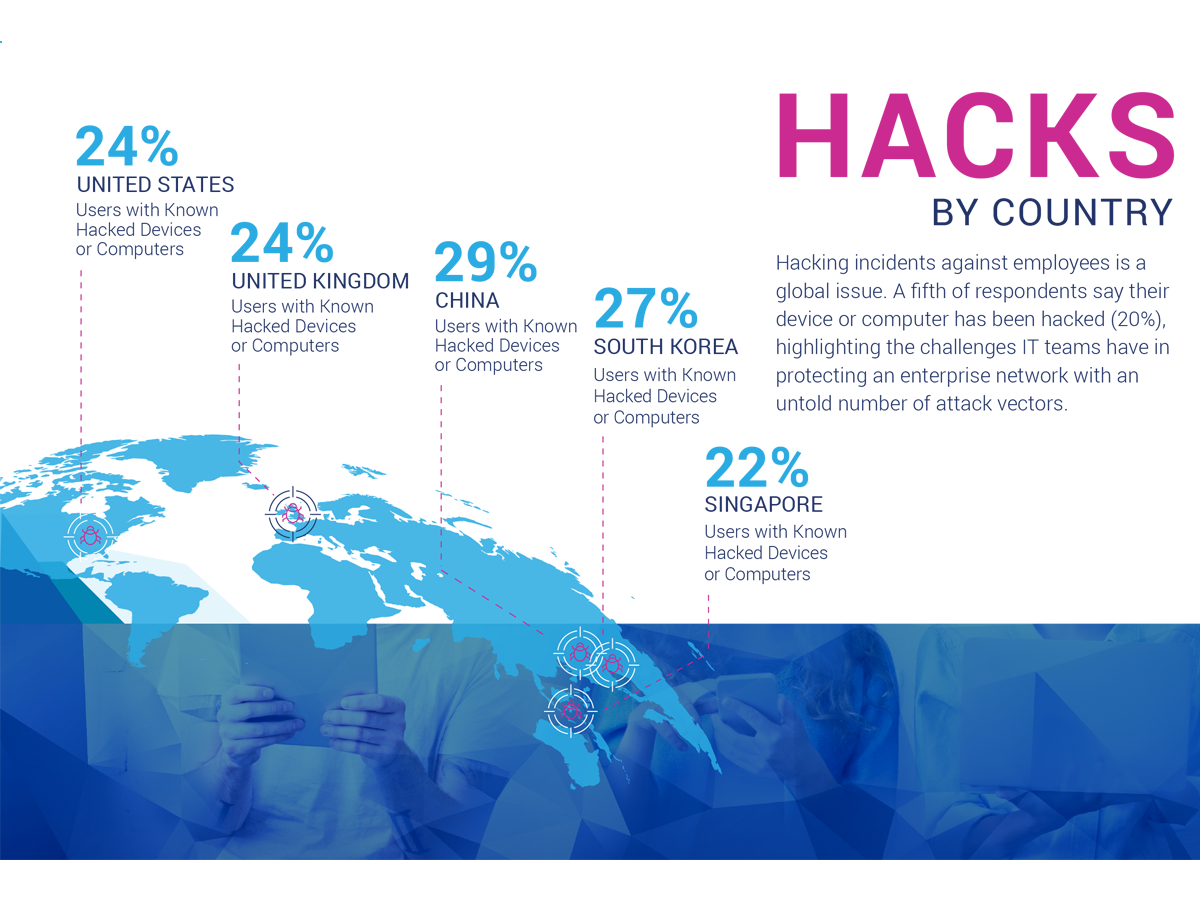 Businesses don’t fare any better: 17 percent of business professionals did not consider security risks before downloading an app and 20 percent of all respondents have experienced a hack on their devices. This is shocking, especially when considering Asians regularly rank as having low awareness of cybersecurity risks, while also having the highest rates of cybersecurity breaches anywhere in the world.

SEE ALSO: On average, we use 9 apps a day, says App Annie. Do we even need more?

“Human behavior and user apathy towards digital devices is a reality IT must contend with every day, as it is a soft underbelly for attackers to exploit,” A10 Networks Asia Pacific marketing director Tina Chee says in a statement.

“We have entered an age where established organizations can be crippled by an employee’s simple act of opening an email attachment infected with malware. The right step is to understand the dependency on apps in our lives, and the diligence we apply to protecting our personal digital information and work-issued devices connected to corporate networks.”