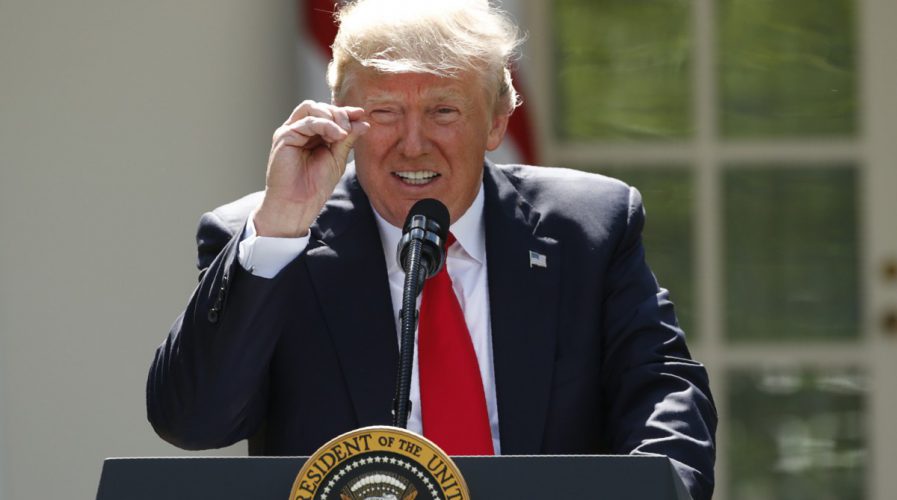 Trump is known as the “Twitter President” and could be among one of the few given access to 280 character counts. Source: Reuters

UNITED STATES President Donald Trump has just announced his intention to pull his country out of a global climate pact, which he says is “unfair at the highest level to the United States”.

The backlash has been swift and heavy. In the hours following Trump’s speech on Thursday afternoon, countless criticisms have been leveled at the president – from world leaders and top environmentalists to the biggest business and technology giants.

Tesla’s Elon Musk and Walt Disney Co.’s CEO Bob Iger have both withdrawn from Trump’s advisory council in protest of his decision. Apple’s Tim Cook expressed his disappointment in a letter to employees, seen by Bloomberg, and said he tried to convince Trump not to make such a decision.

Cook said in the letter.

“Climate change is real and we all share a responsibility to fight it.”

“I know many of you share my disappointment with the White House’s decision.”

Twitter’s Jack Dorsey and Facebook’s Mark Zuckerberg also added their thoughts of disappointment. Dorsey said the move was “incredibly short-sighted” and “backwards”, while Zuckerberg expressed concern it “puts our children at risk”.

But perhaps most apt was Goldman Sachs Group Inc.’s Lloyd Blankfein’s response. He was so dismayed by the president’s decision he posted for the first time on Twitter since he joined the platform in 2011:

Today's decision is a setback for the environment and for the U.S.'s leadership position in the world. #ParisAgreement

Blankfein’s opinion has been echoed worldwide, with many wondering: Has Trump’s decision opened the door for China to become the global leader in environmental issues, green technology, and other global matters beyond climate change?

China has been arming itself to fill this position for years, in an effort to reach its goal of stopping carbon emissions growth by 2030.

China has also been aggressively charging towards dominance in the electric vehicle market, announcing plans in February to transform its taxi fleet to electric cars within five years – that’s 70,000 gas and diesel-powered cars it wishes to replace, reported Forbes.

China’s President Xi Jinping has pledged to “protect” the Paris climate deal time and time again, and in an address to the United Nations in Geneva earlier this year, he said: “The Paris agreement is a milestone in the history of climate governance. We must ensure this endeavor is not derailed.

“All parties should work together to implement the Paris agreement. China will continue to take steps to tackle climate change and fully honor its obligations.”

While Xi has positioned himself as a protector of the environment, Trump has labeled climate change a “hoax” during his campaign trail for the presidency, and also derided the facts as “expensive global warming bullshit“.

He has also repeatedly blamed China for global pollution:

We should be focusing on beautiful, clean air & not on wasteful & very expensive GLOBAL WARMING bullshit! China & others are hurting our air

The concept of global warming was created by and for the Chinese in order to make U.S. manufacturing non-competitive.

So, it comes as no surprise the Chinese government saw Trump’s decision coming, and have begun preparing themselves. Premier Li Keqiang has scheduled a meeting with officials from the European Union to discuss the matter on Friday in Brussels.

Jerry Brown, governor of California – US’ largest state economy – told AP he would be travelling to China this week to “build foreign support for carbon-cutting efforts”. He said alliances with China would “build momentum for a clean-energy future”.

China’s desire and single-minded drive to take leadership in technological advances has given them an edge in many sectors globally. And now with Trump stepping aside and bowing them into a position of command in matters of the Earth, China is that much closer to claiming the coveted keys to the kingdom of global influence, significance and power.