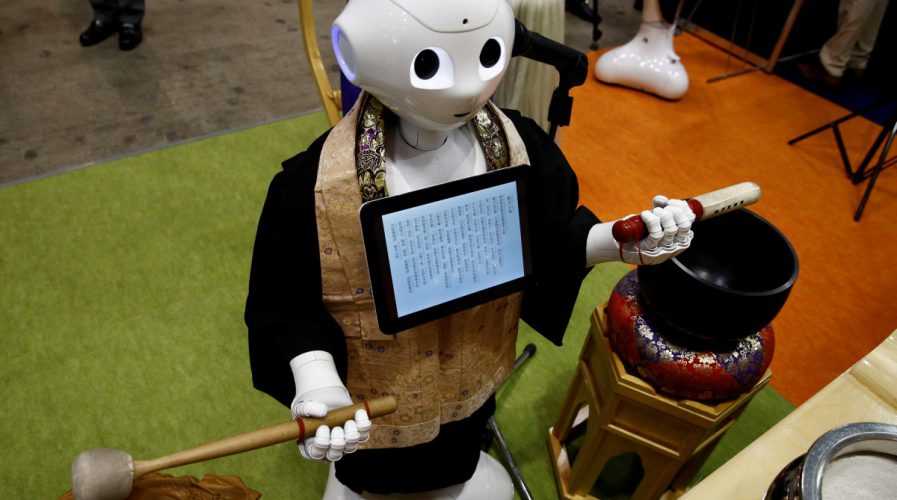 A ‘robot priest’ wearing a Buddhist robe chants sutras at it beats a wooden fish during its demonstration at Life Ending Industry EXPO 2017 in Tokyo, Japan. Source: Reuters

“PEPPER”, Softbank’s popular humanoid robot has gotten a new job as a Buddhist priest for hire in Japan, signaling the further normalization of robots in everyday life in Japan.

Reuters reported on the robot’s new role on Wednesday from a Tokyo trade show for the funeral industry, the Life Ending Industry Expo. Plastic molding maker Nissei Eco Co. programmed the Pepper robot to chant the necessary sutras – which are long Buddhist scripts read during funerals or rituals – in Pepper’s familiar computerized voice, all while tapping a drum.

According to the Guardian, Softbank introduced its robot priest as a cheaper alternative to human priests in Japan. Human priests are often not given enough financial support, thus forcing them to seek out part-time work outside their temple duties. Pepper could posit another option for mourners on a budget, driving down the cost of a priest from JPY237,325 (US$2,172) to just JPY48,861 (US$447) per funeral.

Furthermore, the Pepper robots could solve temples’ problem with staffing and falling revenues. Japan is becoming ever more secular, shunning its Buddhist heritage as the country progresses, making it harder for religious groups to find replacements for older members. In a recent report, Bloomberg found though many Japanese maintain temple traditions for weddings, New Year’s and funerals, fewer than 40 percent of visitors consider themselves religious, resulting in fewer donations – the bread and butter of these spaces.

Pepper robots could help solve this issue by providing essential services at a fraction of the cost. Temples are also exploring the possibilities of livestreaming funeral rites for those who cannot afford to attend the funeral,

These robot priests are the latest development in an effort by Buddhist communities to save their communities from falling attendance rates. Earlier this year, one of the oldest temples in Japan began adopting fintech to spur tourism, while a Chinese temple has embraced “Buddha bots” to attract new believers. 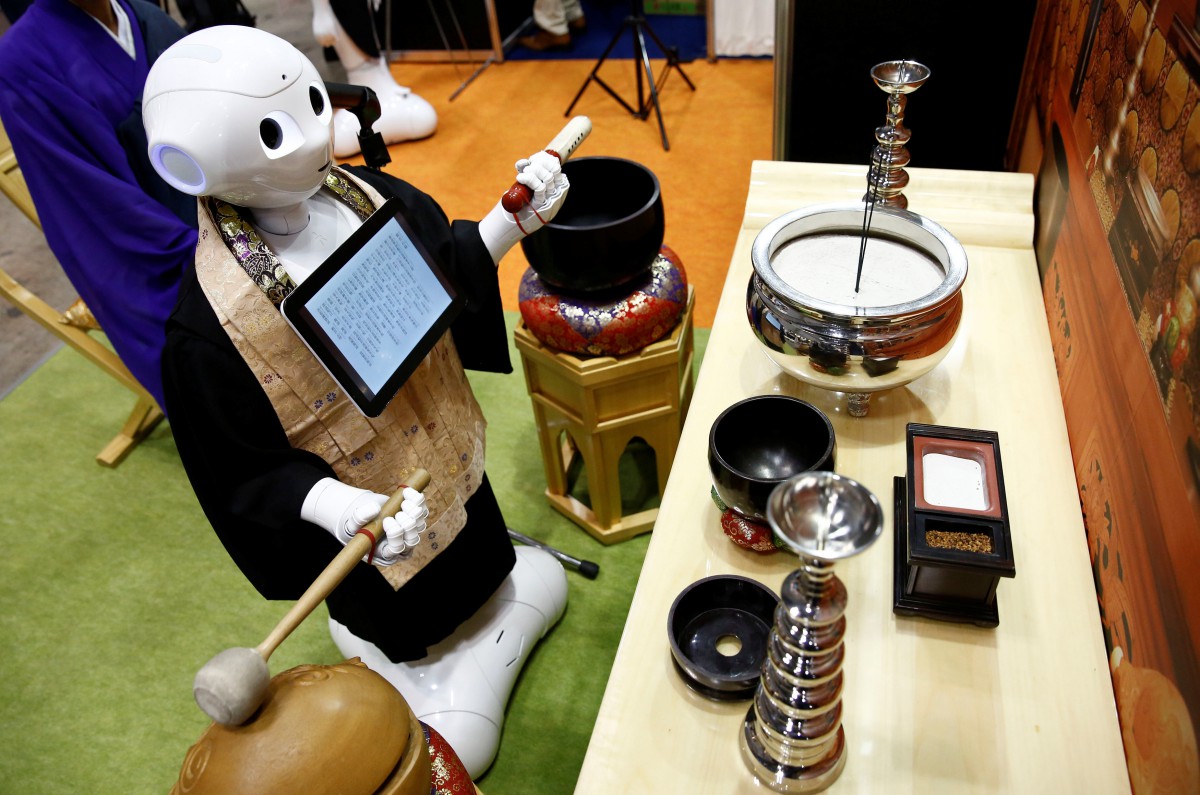 Despite the fact robots are often characterized as cold and unfeeling, robots have crept into daily Japanese life in all manner of ways. Robots now serve as sexual partners, helpers for the elderly, concierges for hotels, and companions for the lonely. Falling birth rates and an aging population has made robots increasingly popular options, and many Japanese are learning to associate human-like feelings and concepts with these robots.

Pepper’s new role is reminiscent of the controversial BlessU-2 robot from Germany that delivers blessings in five languages with the accompaniment of a mini light show. The robot was revealed as part of a Europe-wide celebration of the Reformation and sparked a debate about the role of technology in the future of the church. 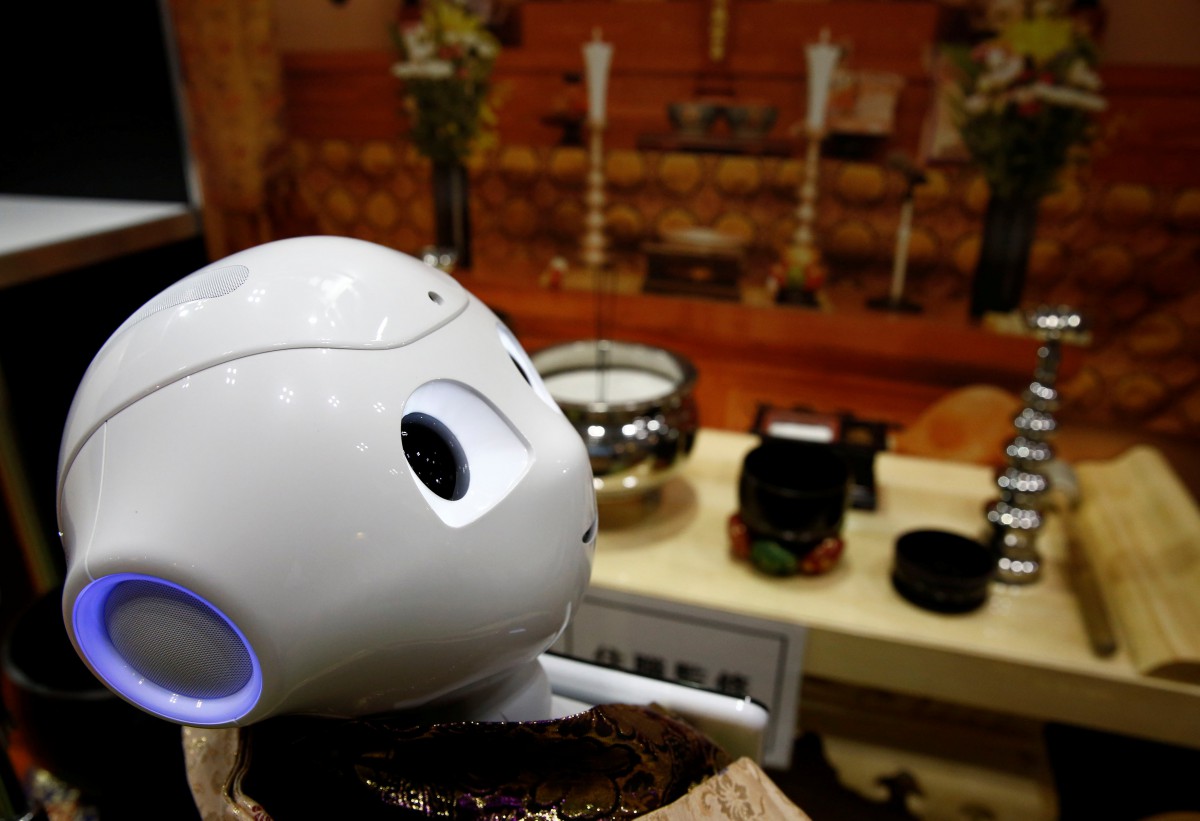 “We wanted people to consider if it is possible to be blessed by a machine, or if a human being is needed,” Stephan Krebs of the Protestant church in Hesse and Nassau said to the Guardian.

“The idea is to provoke debate. People from the street are curious, amused and interested. They are really taken with it and are very positive. But inside the church, some people think we want to replace human pastors with machines. Those who are church-oriented are more critical.”

Much like Pepper, BlessU-2 posited an interesting solution for the sagging recruitment rates of church staff, as well as a continent-wide shortage of priests. “We don’t want to robotise our church work, but see if we can bring a theological perspective to a machine.”

Buddhist priest Tetsugi Matsuo said he was curious to see if Pepper could “impart the ‘heart’ aspect” necessary to religious work. “I believe the ‘heart’ is the foundation of religion.”