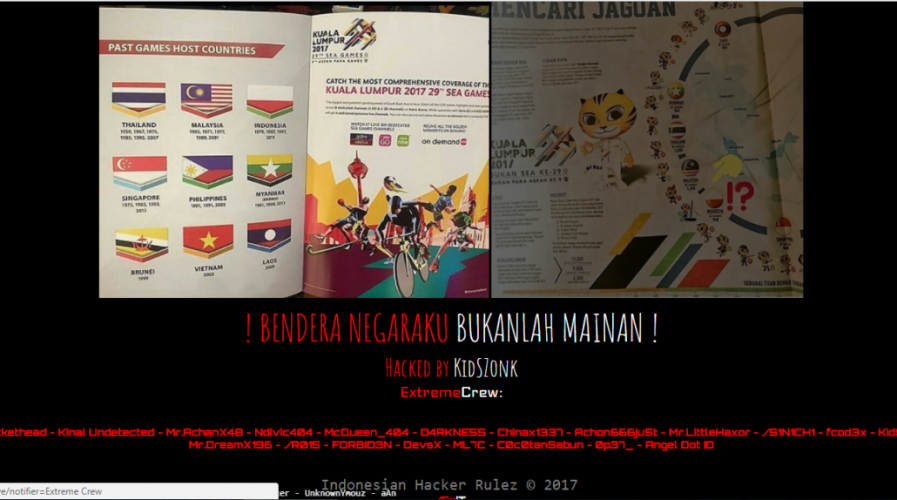 , the hackers left a message with the words “Bendera Negaraku Bukanlah Mainan” (“My national flag is not a plaything”). Source: beahappymillionaire.com

A HACKER group reportedly from Indonesia has defaced dozens of Malaysian websites in response to the recent Indonesian flag blunder at the Kuala Lumpur SEA Games 2017.

According to Malaysian daily The Star, the hackers who dubbed themselves the ExtremeCrew broke into 27 websites following an oversight in the official souvenir booklet of the games which printed an upside-down image of the Indonesian flag.

Posting an image of the booklet containing the error, the hackers left a message with the words “Bendera Negaraku Bukanlah Mainan” (“My national flag is not a plaything”), embedding an Indonesian patriotic anthem in the background.

Popular courier site Easyparcel.my was also among those struck by hackers but it appears that they were hit by another group.

The company has since taken the website down for maintenance and investigation, assuring customers that only the website was affected and that everything else was “backed and is “safe”, The Star reported.

The Star report said Indonesian website Elshianta.com had a full list of the hacked sites, mostly comprising unfrequented blog sites and those not linked to any official body or large corporation.

Internet regulators CyberSecurity Malaysia has yet to issue a comment on the matter, but Malaysia’s Computer Emergency Response Team (MyCert) released an advisory for administrators on steps to beef up security of their websites.

Malaysia has apologised for printing the inverted flag in the souvenir guidebook for the games, which were officially declared open on Saturday.

The mistake, which was spotted at the opening ceremony in Kuala Lumpur, has led to Malaysian officials promising to withdraw and reprint the guidebooks.

The error prompted an outcry in Indonesia, with the hashtag #ShameonyouMalaysia trending during the weekend.

His wish was quickly granted, as, within hours, Malaysian Foreign Minister Anifah Aman apologised to the government and people of Indonesia for the “inadvertent error”.